Get the app Get the app
News & Media Sim-ple solution

General aviation’s dirty little secret is that the vast majority of the enthusiastic students who begin flying each year, hoping to become pilots, never get through training. Shortages of time and/or money, bad weather, scheduling snafus, poor service, and changing priorities all conspire to pull people away from aviation before they accomplish their goals. 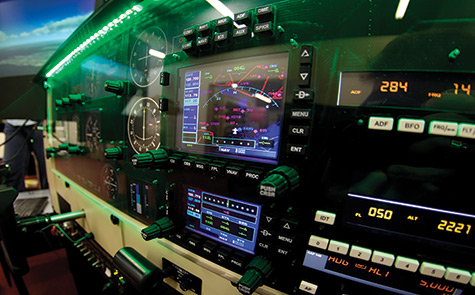 General aviation’s dirty little secret is that the vast majority of the enthusiastic students who begin flying each year, hoping to become pilots, never get through training.

Shortages of time and/or money, bad weather, scheduling snafus, poor service, and changing priorities all conspire to pull people away from aviation before they accomplish their goals. Roughly 60,000 people begin flight training in the United States every year, and 78 percent walk away without earning an FAA certificate. AOPA and the aviation industry have pursued a number of different strategies aimed at attracting new students and reversing the slow decline in the U.S. pilot population, which has dipped below 600,000 for the first time in decades.

A promising new tool for achieving these vital goals, however, appears to be taking shape in Austin, Texas, where privately owned Redbird Flight Simulations has created a series of low-cost, high-fidelity training devices that, for the first time, bring full-motion flight simulation to primary flight training. Unlike the multimillion-dollar flight simulators airline and military flight crews have used for years to greatly improve the quality and safety of their training, a top-of-the-line Redbird sim sells for less than $70,000. 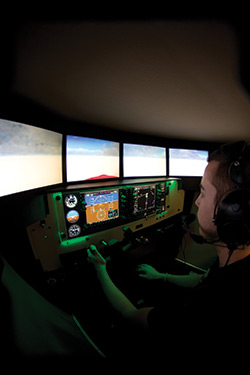 Redbird founder Jerry Gregoire, an accomplished GA pilot and former computer industry executive, said technology has advanced to the point that off-the-shelf computers (linked to mass-produced electric motors) can provide flight simulation so realistic that primary students can use it to learn or reinforce fundamental stick-and-rudder skills. During periods of adverse weather, or when an airplane or instructor isn’t available, flight students can use simulators to continue to advance their training and build their skills—and their progress is recorded on a digital memory stick. Before performing potentially intimidating maneuvers such as stalls and steep turns in an airplane, students can familiarize themselves with the sights, sounds, and sensations in a sim. And before flying to an unfamiliar airport, they can go there in the sim and note the checkpoints they will see along the way and runway layouts they’ll experience when they get there.

“There’s no reason a realistic flight simulator has to cost millions of dollars, or even hundreds of thousands of dollars,” Gregoire said. “We’re taking the lessons we learned in the computer industry and applying them to GA flight training. The current failure rate among flight students shows that the system itself is seriously broken. If we’re successful, we’ll help turn that around, and along the way we’ll change what has been a very small market for simulators into a big one.”

Gregoire said Redbird and its hard-core techie founders had modest ambitions when they started the company in 2007 and were hoping, at first, to sell enough simulators to fund ongoing research and development. Now the firm is building and selling upwards of nine full-motion simulators a month, and managers believe the products will become standard equipment at a significant percentage of the 3,200 GA flight schools and flying clubs in the United States.

Each sim is made from parts small enough to fit through standard door frames, operate through their full range of motion in rooms with ceilings as low as eight feet, and plug into a single standard wall socket.

John King, who founded King Schools with wife Martha, has a marketing agreement with Redbird, and his company is producing instructional coursework for simulator-based training programs.

King compares Redbird’s future impact on GA flight training to the recent revolution that has made digital, glass-panel avionics commonplace in new GA aircraft. Redbird sims, he said, bring “Moore’s law” to flight training. (Moore’s law holds that the capacity of the integrated circuits that form the basis of computer technology doubles every 20 months.)

“We’ve had wonderful new products like the [Garmin] G1000 that have quickly become the industry standard in new aircraft,” he said, “and Redbird will do the same thing for flight training.”

Students are allowed to log up to 2.5 hours of sim time toward private pilot certificates; 20 hours toward instrument ratings; and 50 hours for commercial certificates (and those numbers go up slightly at FAA Part 142 schools). While the FAA requires private pilot candidates to log at least 40 hours before taking checkrides, the fact is that most students log about 70 hours. King said more simulator time could help students to hone their flying skills without burning more avgas.

About 300 U.S. flight schools are Cessna Pilot Centers, and the majority of them are likely to buy Redbird sims, King said. “Those flight schools will have a major competitive advantage because they’ll be able to provide training, and their students will continue progressing, even when the weather’s bad or no training aircraft are available. Students will seek out flight schools that offer realistic flight simulation and avoid schools that don’t have it.” 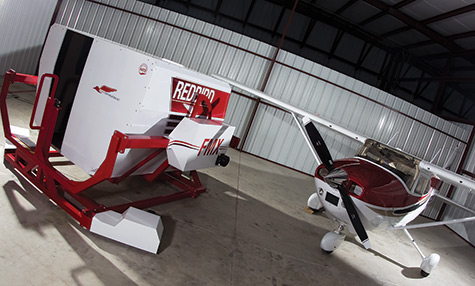 Brant Howell, founder of Smith Mountain Lake Aviation in southern Virginia, bought a full-motion Redbird sim for his two-airplane flight school last year and said it allowed his school to keep operating during the worst winter in living memory.

“We had a rough winter with much more snow than the South is used to, and without the simulator, activity at our school would have come to a stop,” he said. “The sim kept us going in some very lean times.”

Howell’s sim is equipped with a traditional six-pack panel that he uses to teach “basic attitude/instrument flying.” It doesn’t have the G1000 or other glass-panel options, although it offers the flexibility to add those features later.

Howell uses the sim primarily for instrument students. They get to see vacuum failures and electrical problems in the sim, where the emergencies appear much more real than having an instructor simply cover an instrument with a sticky note. Primary students use the sim for introductions to new maneuvers, and to practice go-arounds, stalls, steep turns, turns around a point, and cross-countries.

Best of all, when students have questions, they can stop, rewind, and replay portions of their flights with an instructor right there to provide answers. Students can focus on those particular areas without having to constantly scan for traffic or divide their attention among the myriad things that pilots flying actual aircraft must monitor.

Howell charges $105 an hour for the simulator, compared to $150 an hour for a rental aircraft. Given the fixed and operational costs of flying the airplane, each hour in the simulator is far more profitable for Howell’s flight school.

Hourly pay for his one full-time and two part-time instructors is the same whether they’re teaching in an aircraft or the sim, he said. Howell was concerned at first that instructors seeking to build flight time would resist teaching in the sim, because they can’t log the hours as PIC, but that hasn’t reduced their enthusiasm for sim instruction. They see that their students learn the nuances of operating equipment, such as the Garmin GNS430/530, in the sim far more quickly than in noisy, bouncy aircraft cockpits.

Howell said his flight school doesn’t do much advertising, but news of the simulator has spread quickly in the Roanoke, Virginia, area near his school, and students—particularly instrument students and IFR pilots seeking recurrent training—are coming from far beyond the school’s normal geographic area. “As word spreads, we’re getting students from far beyond our traditional reach.”

AOPA also has used Redbird simulators for tasks that aren’t directly related to flight instruction. At a recent legislative affairs dinner in Washington, D.C., for example, lawmakers took turns taking virtual flights to airports in their districts by way of the simulator. Redbird had brought a full-motion sim, carried it to the ballroom, and plugged it into a wall socket a few hours before the event.

“The lawmakers’ reaction to the simulator was fantastic,” said Mark Kimberling, AOPA director for state government affairs and a former airline pilot and GA flight instructor. “Each of them got to see their districts from the perspective of a GA pilot, and they were exposed to the latest in GA aircraft and flight training technology. I’m sure we and other organizations will find other nontraditional uses for these simulators going forward.”