Top of the world

Flying the Rockies, the top of the world, can be one of the most sublime experiences in general aviation…when it is done correctly. Done incorrectly, it can be deadly.

Mountain flying is one of the topics featured at AOPA Aviation Summit 2010, November 11 through 13 at Long Beach, California. Lori MacNichol will conduct “Mountain Canyon Flying” on November 12. Visit the website for more information. 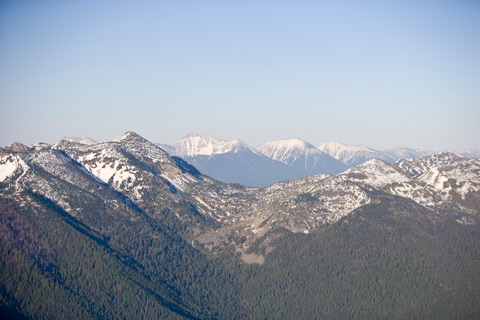 Flying the Rockies, the top of the world, can be one of the most sublime experiences in general aviation…when it is done correctly. Done incorrectly, it can be deadly.

Folks from the eastern United States or the flatlands who have never flown the Rockies often think about mountains as things that are under them. Not so. In a light airplane in the Rockies, you will be a gnat flying by the face of God, in an airplane near its ceiling, subject to winds and downdrafts that can be vicious if you let them surprise you.

Most single-engine general aviation airplanes have very limited performance above 10,000 feet, especially with passengers aboard. Some won’t even fly that high. With two men aboard on a typical summer day, the 1952 Cessna 170B I used to own couldn’t climb above 9,500 feet. Years ago I used to rent a Cessna 172, and with me and two passengers aboard I couldn’t get it above 9,000 feet. 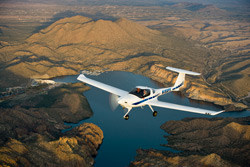 It seems that every year or so a pilot from the flatlands loads his family and their luggage into a single-engine airplane and sets forth through the skies for a Colorado mountain vacation…and crashes here in these old mountains. The usual post-accident epitaph is “pilot flew into a box canyon” or “into rising terrain.” When I read about one of these accidents, I always wonder if the pilot ever climbed his airplane to its ceiling with that load, just to see….

There is a lot more to mountain flying than that, of course. We pilots need to ensure we know the capabilities of our airplanes, don’t overload them, fly in the mountains only in good weather—and last, but definitely not least, understand the whys and wherefores of mountain flying.

A perfect day arrived in Colorado in early May: high pressure, less than four knots of wind, blue sky in every direction, temperature at ground level in the upper 40s. The American Champion High Country Explorer got a careful preflight and a load of fuel, and after the usual calls to clearance delivery and ground, I taxied out. My hometown airport, Colorado Springs Municipal, has a field elevation of 6,187 feet.

To the west, Pikes Peak still wore its crown of snow, which extended down into the forested slopes. To the south, I could see the peak of Greenhorn Mountain 58 nautical miles away, and beyond it, slightly to the left, at 88 nautical miles, the snow-covered twins, Spanish Peaks, stood out clearly. 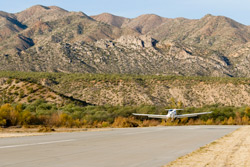 Clear to the moon and a million miles viz—this was a day to fly.

I climbed to 10,500 feet over the city and headed west up Ute Pass toward Woodland Park, with the monstrous bulk of Pikes Peak on my left. The grand vista of the Rocky Mountains came into view, spread all across the windscreen. There was a little more wind at altitude, but not much. Just the tiniest touch of turbulence. The GPS settled out at an average of 92 knots groundspeed, so even the west wind was cooperating. Past Woodland Park, I crossed the Continental Divide pointed toward Wilkerson Pass.

Wilkerson Pass at 9,500 feet has an AWOS on the top of the 11,300-foot peak to the north, and if the wind had been just a bit worse, I would have listened to it. In this almost dead air under a robin’s-egg-blue sky, I didn’t bother. Today in this sweet-flying airplane, I scooted through the pass and out over the floor of South Park, reveling in the joy of flight.

Over the park I altered course to the southwest for Trout Creek Pass, only 9,487 feet high, and then flew down the canyon to Central Colorado Regional Airport at Buena Vista on the Arkansas River, with its 8,500-foot-long runway 7,946 feet above sea level. When I landed, I was just an hour from the Springs. 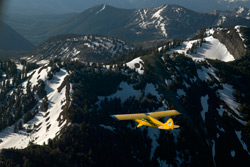 The nice lady at the FBO gave me a cup of coffee and a piece of homemade cake. On a bench outside, I sat staring at the mountains and thought about flying the Rockies. Just 27 miles up the valley is Leadville, with a 6,400-foot-long runway 9,927 feet above sea level. This is the highest public airport in North America. On a summer day in Leadville, density altitude routinely exceeds 12,000 feet. Can your single- or twin-engine airplane take off at max gross weight at 12,000 feet? 10,000? Do you know?

FAR Section 91.211(a) requires the use of oxygen by a pilot in an unpressurized airplane when the flight is above 12,500 feet for more than 30 minutes. Above 14,000 feet, the pilot must be on supplemental oxygen at all times. That being said, healthy people who live near sea level often get slightly hypoxic when they visit Colorado Springs, 6,200 feet above salt water. Skiers from the lowlands tell us that it can take days for them to become acclimated to the altitude at Colorado ski resorts.

Flying with a raging headache while slightly nauseous, with diminished visual acuity, isn’t something any sane pilot wants to do. Doing it with granite just beneath and to all sides seems suicidal. Buy, rent, or borrow a portable oxygen bottle; take it along; and use it whenever you feel less than your usual studly self, regardless of the altitude. Real men and women use oxygen. The Navy requires oxygen above a cabin altitude of 10,000 feet. Crews of tactical jets use it from engine start to shutdown. 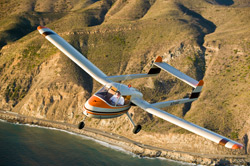 Before you aviate across the top of the world, you need a mountain-flying checkout by an experienced CFI. When you are coming from the East, call ahead to one of the Colorado Front Range airports and book a half-day with an instructor. With him or her in the right seat, go flying in the mountains. That instructor will talk about how to read the wind, about updrafts and downdrafts off the peaks and ridges, mountain waves, what you can learn from cloud formations, how to approach passes safely and prudently, how the thin air dictates wider traffic patterns, and how quickly weather in the mountains can change. And you will experience the ways in which your aircraft’s performance is degraded at high density altitudes.

You can get all this information from a training movie—and they are definitely worth your time—but they are no substitute for that mountain-flying checkout with an experienced CFI in your airplane.

Flying in the mountains in the fall, winter, and early spring presents a whole new set of problems. While dense, cold air allows your engine to produce more horsepower and the wings more lift, the weather is often iffy and unpredictable and winds can be fierce. Few mountain airports have enough hangar facilities to keep your airplane inside overnight. If you tie down your airplane outside in these mountains in winter, the next morning you will find the engine cold-soaked. If you don’t preheat your engine, it probably won’t start. A really cold one won’t even turn over. You will also find a layer of frost on the airplane, or ice and snow, all of which must somehow be cleaned completely off before the airplane can fly as its designers intended. There are no shortcuts allowed here. Failure to completely clean off frost, ice, and snow is an error that has crashed airliners and light airplanes alike. 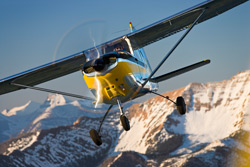 Before you go, call ahead and find out exactly what services the FBO can offer, from hangar to preheat to deice. Ask if the runways and taxiways and ramps have been plowed to asphalt, or if they are coated with ice, snow, or slush. Slush on your brakes can freeze solid overnight, or after you take off and climb to altitude.

One more word to the wise: Before you commit life, carefully sump your tanks.

Properly caffeinated and fortified with cake that May morning, I took off from Buena Vista and began climbing in a circle over the field. With just me aboard, a 180-horspower engine, and boundary layer control devices on the upper edges of the wings, the High Country climbed at 800 feet a minute as I eyed the canyon between Mount Yale, 14,196 feet high, and Mount Princeton, which is a foot taller. That canyon leads to Cottonwood Pass, a notch in the Continental Divide at 12,126 feet in elevation.

I kept circling with the engine at full power, past 12,000, past 13,000, before I finally leveled at 13,400 and headed west into the canyon, with the massive, snow-covered peaks and their jagged ridge buttresses towering on both sides. Never, ever climb into a canyon toward a pass: Get your altitude before you enter. This rule is written in blood.

The ride that morning was smooth, but I stayed in the middle of the canyon anyway. An unexpected strong downdraft off one of these peaks can ruin a pilot’s day. Soon I saw the switchbacks and steep grade of the jeep road, which was still clogged with snow. Wisps of snow plumed eastward off the crest of the pass, and no doubt under the rim was a rolling downdraft, an invisible hazard waiting for a neophyte trying to climb up through it. 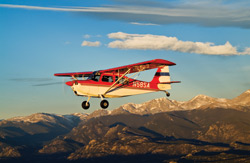 Once over the western slope, I lowered the nose and headed south for Tincup, an old gold-mining town tucked in a valley, high and tight against the mountain. It was properly somnolent that morning. After looking it over, I began climbing again, circling over the town. I followed the jeep road toward Tincup Pass, but somehow there among the snowy peaks I missed it and found myself skimming ridges.

Soon the mighty mountains lay behind and I motored out across the Arkansas River valley a few miles north of Salida, letting the airplane drift down to thicker air. The west wind hastened me eastward: The groundspeed readout on the GPS averaged around 130 knots.

Ancient mountains in every direction, snow glistening brightly in the morning sun, the hum of the engine and the stick alive in my hand…flying doesn’t get any better.

Stephen Coonts owns two airplanes, an American Champion High Country Explorer and a Breezy. His latest novel is The Disciple.