Get the app Get the app
AOPA Members DO more LEARN more SAVE more - Get MORE out of being a pilot - CLICK HERE
News & Media Dream come true: DR COPTR gets new clinic for island 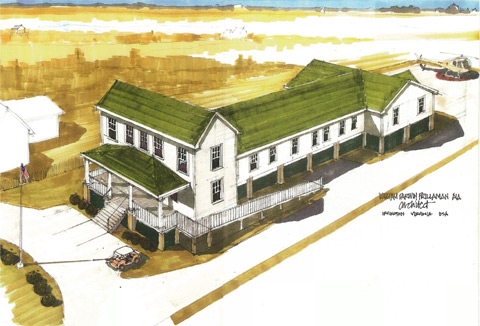 
For a few hours, a remote island in the mid-Atlantic’s Chesapeake Bay transformed into a bustling metropolis. Airplanes and helicopters landed at the Tangier Island airport minutes apart; ferries filled with tourists, and the media made regular trips to the island. Streets, more accurately described as paved golf cart paths, were blocked off, and hundreds of children and adults stood outside a tan two-story building, fanning themselves in the 90-degree heat. State and federal dignitaries lined its front porch.

As a gray-haired, fair-complected man slowly walked out onto the porch, grinned humbly, and waved, the throng erupted with cheers and applause. The celebrity that day, Aug. 29, was Dr. David Nichols, the island’s miracle worker. Nichols has not only saved lives on the island for three decades but also spearheaded the building of a state-of-the-art medical facility to replace the dilapidated 1950s-era clinic. Many of the island’s 600 residents turned out to celebrate the David B. Nichols Health Center grand opening and to pray for another miracle—this time for Nichols, who has been diagnosed with terminal cancer. 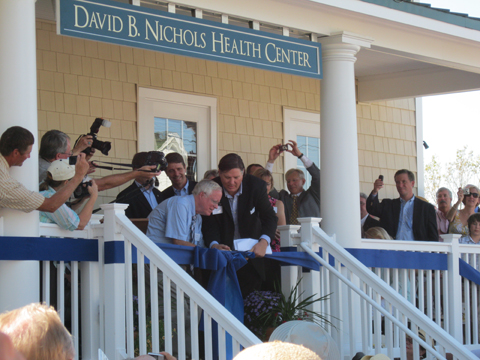 Click on the image above to view a slideshow that highlights the dramatic differences between the pervious 1950s-era medical center and the new state-of-the-art building.

“Dr. Nichols, you are such a man for such a time as this. …We love you,” Tangier Island Mayor James “Ooker” Eskridge said, kicking off the grand opening. The island had no regular medical care until Nichols started flying to the island every Thursday 31 years ago. He mentored Tangier native Inez Pruitt, who is now his physician’s assistant and provides 24/7 medical care on the island.

“Little did I know the mission I started 30 years ago,” Nichols said. “I have been so blessed. I thank all of you in Tangier for allowing me into your lives. Some of the fondest memories of my life are here.”

With stable medical care available, the next step was to build a new facility, one built to the highest standards and having the latest technology.

On Nov. 18, 2005, Nichols flew Jimmie Carter, his friend and patient from his mainland Virginia practice, to Tangier Island for lunch to talk about his dream for a new clinic. The two agreed to pursue the dream that day and created a plan to accomplish it.

“I got scared about what I had gotten myself into,” recalled Carter, who became president of the Tangier Island Health Foundation. The foundation received funding from the state and federal governments, pro bono services, and more than 375 individual donations to reach the needed $1.7 million in five years. Virginia Gov. Bob McDonnell, who attended the ceremony, pledged the commonwealth’s assistance and cited the clinic as a perfect example of a successful public-private project. The foundation also is accepting funding that will be used for the continued upkeep and operation of the clinic because it is beyond the means of the island residents, whose average family income is $27,000 a year.

“My vision for the clinic, as of today, has truly been realized,” an emotional Nichols told the gathering. “I consider this clinic a blessing and a gift from God.” So do the residents, many of whom are in awe that such a facility is located on the island.

The Tangier Island Health Foundation is accepting donations to help keep the clinic operating because it is beyond the means of the island residents to support themselves. A movie about the island and Dr. Nichols is available for a $15 donation to the foundation. Orders can be placed with the movie producer, Michael Kucera. Donations, general or to receive the movie, can be sent to the Tangier Island Health Foundation at P.O. Box 788, Irvington, VA 22480. Learn more about the movie and watch a preview.

No more will the residents sit in a waiting room listening to a squeaky ceiling fan; be treated in exam rooms with peeling ceiling panels, missing ceramic tiles on the walls, and rusty sinks; sit on a toilet seat that teeters; or rely on an X-ray machine that looks as if it were installed in the 1950s when the clinic was built.

The new medical center, crisp and white on the inside, has a spacious waiting area, spotless exam rooms, a digital X-ray machine that will allow the images to be sent to the mainland, a dentist unit, and apartments in case the doctor or other medical provider gets weathered in overnight.

“This is a real partnership, and they are being so cooperative,” Carter said of the Riverside Medical Group.

Nichols also has had several years to teach Pruitt his approach to providing compassionate care.

“You’ve been instrumental in molding me … [into] a close reflection of you,” Pruitt told Nichols during the ceremony. Afterward, she was nearby as Nichols proudly showed off a waterman’s hands to a visitor. The doctor caressed the gnarled, callused hands as soothingly as he would a newborn. The calluses he dubs “barnacles” from the years of hard work on the Chesapeake Bay waters.

Pruitt is also a reflection of Nichols’ dedication to providing medical care. 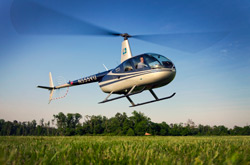 Nichols bases the Robinson R44 at Hummel Field near Saluda, Va. The flight from his home base to Tangier Island takes only 15 minutes.

Nichols has visited the island every Thursday, except for Thanksgiving in which he stopped by earlier in the week. If the weather was too bad, he would commute two hours (one way) by car and ferry. Often, though, he flew a Cessna Skylane or Robinson R44, even in deteriorating weather conditions. Using the aircraft shortened the trip to about 15 minutes. One Thursday, the wind at the Tangier Airport was reported at 48 mph. It was so windy, Pruitt recalled, that the nurses from his mainland practice refused to accompany him, and the patients on Tangier refused to leave their homes. So, he made house calls.

Pruitt braved six years of commuting by ferry from the island to the University of Maryland, Eastern Shore to become a physician’s assistant, something she wouldn’t have anticipated when she first started working for Nichols. She was a 25-year-old stay-at-home mom without a high school diploma. But, on Dec. 24, 1987, she entered “the Nichols school of hard knocks” at the island clinic and gradually added responsibilities. She began dreaming of entering the medical field, and when she spoke to Nichols about this, he immediately responded, “It’s an answer to prayer. It’s just what Tangier needs,” Pruitt recalled. In 2001, she earned her GED. At the age of 39, she enrolled in the university.

“That’s not exactly rolling out of your campus bed,” Nichols said. “We are so lucky to have her.” Nichols explained that without Pruitt’s 24/7 availability on the island, “some of you in this audience would not be here.” Island residents had been known to wait for Nichols’ Thursday visit with broken bones or chest pains instead of taking the ferry to the mainland for urgent treatment.

Nichols’ new Tangier office differs greatly in one aspect from his mainland office (he didn’t have his own office in the old Tangier clinic): photos. Nichols’ office in White Stone, Va., was filled with photos of patients and aircraft, and accolades hung on the walls. His new Tangier office walls are bare. That will likely change soon, as Nichols received numerous commendations during the grand opening.

He received honors from the governor, Virginia’s U.S. senators and representatives, the commonwealth’s Senate and House of Delegates, and county supervisor. Secretary of the Department of Health and Human Services Kathleen Sebelius wrote to Nichols, congratulating him on the grand opening of the clinic and commending him for his 31 years of dedicated medical service to the island residents. He also was honored with the first Country Doctor of the Decade Award, just four years after surpassing more than 200 applicants for the Country Doctor of the Year Award in 2006.

Nichols, who has said that what he has done on Tangier Island wouldn’t have been possible without aviation, also received awards for his use of fixed- and rotary-wing aircraft, including the Virginia Helicopter Association’s first humanitarian award.

AOPA presented Nichols, who was featured in the 2009 AOPA Pilot article “DR COPTR” and helped create commercials for the association’s General Aviation Serves America campaign, with a Presidential Citation from AOPA President Craig Fuller. “Your efforts represent the finest tradition of humanitarian work,” the award said. “Our hope is that future pilots will use their piloting skills as wisely and compassionately as you.”

Nichols’ passion for aviation runs as deep as his love for the people of Tangier. While many of his friends and family rode the ferry to the island, Nichols arrived by air. He grounded himself after being diagnosed with cancer, but his son continues to fly him to the island. Nichols said his spirit is always lifted when Tangier comes into view on his flight across the Chesapeake Bay.

‘This is not the end’

Now that the new state-of-the-art facility is complete and future medical care has been secured for the island, some might say the work is finished.

“This is not the end,” Virginia Department of Health Commissioner Karen Remley promised the residents of Tangier during the grand opening. “This is the beginning, and we’re going to keep going.” The residents of Tangier have special health considerations, including a high rate of heart disease, kidney disease, strokes, diabetes, and cancer.

Although the amount of time Nichols will have with the island residents is uncertain, he also made it clear that this is not the end.

“I have a terminal illness, and while I will leave you in body, I will never leave you in spirit. I will keep an eye on you,” Nichols promised the residents. And they know, after 31 years of medical service and a new high-tech clinic, that Nichols is a man of his word. “Remember, on Tangier, you are a little closer to heaven.”