Get the app Get the app
Already a member? Please login below for an enhanced experience. Not a member? Join today
News & Media Swift fuel to power record attempt 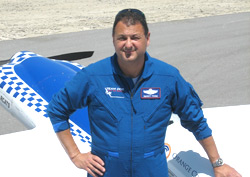 If successful, it would be the first record in its class to be set with a fuel derived from creating hydrocarbons from bio-mass. The fuel is now produced in testing quantities for Embry-Riddle Aeronautical University, Cessna Aircraft Co., Lycoming, and AvFuel. AvFuel is testing it in gasoline tankers. Embry-Riddle hopes to use the fuel under a supplemental type certificate (STC) in its fleet of Cessna 172 aircraft. It will start the STC application process in October. 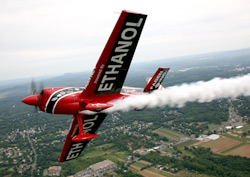 Young will use the fuel in airshows and to set additional records at public events. Other airshow performers have also used their celebrity status to promote alternative fuels. Greg Poe used his airshow performances to put the spotlight on ethanol as an alternative fuel. Other than ethanol, Poe also uses his public recognition to talk with kids and get them to focus on the positive things in their lives that helps them reach their full potential. He has reached 5,000 young people.