Get the app Get the app
AOPA will be closed July 4th, in observance of the Independence Day holiday. We will reopen at 8:30 am ET on Tuesday, July 5.
News & Media Flight for the Human Spirit crosses into Canada

Flight for the Human Spirit crosses into Canada 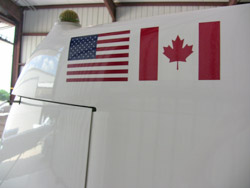 Michael Combs and the Flight for the Human Spirit reached two major milestones last week--flying 20,000 nautical miles and crossing the border into Canada.

On the advice of local pilots, the flight is traveling into the northern territories before turning southwest to Juneau, a 1,200-nm segment. As of Sept. 6, Combs and Warner had made it as far as Prince George, British Columbia, before stopping to wait out low ceilings.

“The storms and weather patterns are different from what I’ve experienced anywhere else throughout this incredible trip,” Combs said. “The conditions changed rapidly from sunny to stormy, and from high cloud bases to low. When we were just 90 miles out from Prince George, we were listening to a passenger jet attempting his third landing right here because of the shifting winds and weather. That prompted us to monitor the weather information on board in order to determine what other alternatives we had before us. It’s not like the U.S. where you have many airports to choose from at any given moment. Here in Canada you may have to fly another 100 miles to your next optional landing site. By the time we were 30 miles out, the winds were down to just three knots.”