Get the app Get the app
Already a member? Please login below for an enhanced experience. Not a member? Join today
News & Media 'Cricket' electric airplane flies in France 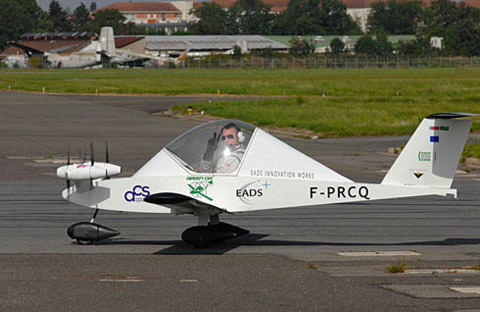 The all electric Cri-Cri (French for cricket), jointly developed by EADS Innovation Works, Aero Composites Saintonge, and the Green Cri-Cri Association, has flown at Le Bourget airport near Paris. It is claimed to be the first four-motor all-electric aerobatic airplane.

The aircraft is supported by the French Museum of Air and Space. All systems performed well and the airplane returned safely after seven minutes, EADS said in a press release.

“This aircraft flies very smoothly, much more quietly than a plane with conventional propulsion,” said Didier Esteyne, who piloted the all-electric Cri-Cri. “But we are still at the beginning and have a lot to learn. We are allowed to start aerobatic maneuvers only after five hours of flight and 15 landings.”

“The Cri-Cri is a low-cost test bed for system integration of electrical technologies in support of projects like our hybrid propulsion concept for helicopters,” said Jean Botti, EADS’s chief technical officer. “We hope to get a lot of useful information out of this project.”

The aircraft uses lightweight composite structures, four brushless electric motors with counter-rotating propellers, and high energy-density lithium batteries. Developers think the aircraft will be able to fly for 30 minutes at a speed of 68 mph and climb at 1,000 feet per minute.

Other research projects at EADS include algae-based biofuel and a helicopter hybrid propulsion system combining electrical power with piston engines.