Get the app Get the app
Already a member? Please login below for an enhanced experience. Not a member? Join today
News & Media High winds bring early Reno finish 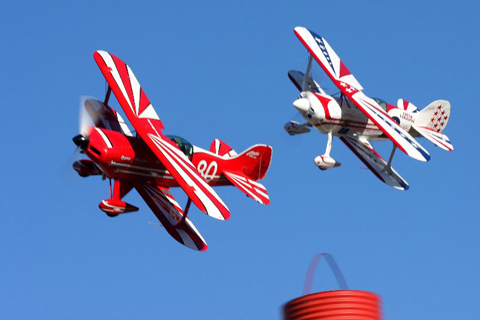 Click the image above to view a slideshow. Photos by Robert Fisher.

After declaring an emergency, Giboney’s airplane pancaked and then cartwheeled before coming to a stop on the airport. ( KOLO-TV has video of the accident.) However, Giboney was able to walk from the wreckage and waved to race fans before being taken to a hospital for evaluation.

Because of high winds, which are very evident in the video of Rapid Travel’s crash, air race officials canceled the T-6 Gold and Unlimited Gold races, citing safety concerns.

“The decision to cancel our championship race was not an easy one, but it was the right decision,” said Mike Houghton, president and CEO of the National Championship Air Races. “The safety of our pilots is our foremost concern and this decision was made along with class presidents, the Federal Aviation Administration, the Reno-Tahoe Airport Authority, and the Reno Air Racing Association.”

“We had winds gusting from 20 to 30 knots, and it was angling 40 or 50 degrees,” said John Zayac of Centennial, Colo., pilot of the T-6 McDonald Racer and a 10-year Reno air racing veteran, adding that it was a direct crosswind to Reno/Stead Airport’s primary runway. “I think we all made the right decision in standing down,” he said “It shows the professionalism and the caliber of the people there, to not fly when we all badly wanted to do so.”

It was the first time in 47 years of air racing at Reno that winds forced a cancellation.

Each racing class has agreed to certain minimum flight conditions on the course at Reno, Zayac said. For the T-6 class, maximum winds allowed on the track are 30 mph. “A constant wind at that level is no problem,” he said, but the direction of the wind and gust factor were problematic.

According to official rules created by each individual race class, when a race is canceled for any reason, the winner is declared based on their qualifying positions. Steve Hinton of Bakersfield, Calif., pilot of the P-51D Mustang Strega, was named winner of the Breitling Unlimited Gold Race for the second year in a row, with an average speed of 473.437 mph. Dennis Buehn of Carson City, Nev., won the T-6 class flying Midnight Miss III at an average speed of 241.247 mph..

Zayac, who had the goal of breaking the T-6 air racing speed record and winning first place in the T-6 Gold race, flew home with second place. He said he had a little bad luck when he had to pass a slower T-6 during qualifications, explaining that passing requires you to fly a slightly longer distance around that portion of the course, which compromises efficiency. He was content with second place overall. “There was just one more aircraft we had to get around,” he said.

He plans to try again next year. “We feel more comfortable and confident that we can do it next year,” he said, noting that his new engine, built by Tulsa Aircraft, was turning in practice laps at around 245 mph. “It’s a lot of fun,” Zayac said.