Get the app Get the app
Already a member? Please login below for an enhanced experience. Not a member? Join today
News & Media LSAs light up the skies in Illinois

LSAs light up the skies in Illinois 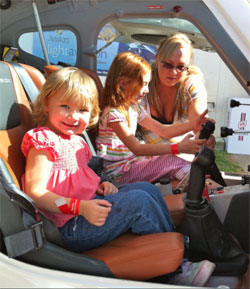 Potential future pilots get to sit at the controls of AOPA’s 2010 Fun to Fly Sweepstakes Remos GX.

AOPA's Fun to Fly Remos GX was part of the static display at the event, which counted 50 makes and models plus a variety of vendors.

American Legend, Cubcrafters, Evektor, Flight Design, Gobosh, Jabiru, Just, Piper, Remos, Tecnam, X-Air, and Zenith brought airplanes to the show. Making its United States debut was the KR-030 Topaz from Niu Group in Poland. The high-wing aircraft has a composite empennage and flaps; ailerons are carbon laminate. It is powered by an 80-horsepower Rotax 912UL engine. Useful load is 555 pounds.

Another entry from Poland was Trim's Navigator 600, which features a carbon-fiber empennage, composite wings, and a Woodcomp SR200 fixed-pitch propeller. Its useful load is 606 pounds. The airplanes are shipped from Poland to Buffalo, N.Y., for finishing and flight testing. The Navigator 600 has Advanced Ultralight certification in Canada, and about a half-dozen have been sold in the United States, where it is certified special light sport aircraft, a company representative said.

The all-aluminum-airframe Opus Super 2 from Opus Aircraft has a shoulder wing design with a canopy. The airplane was originally designed and produced in the United Kingdom. You can see it at the company's facility at the Rockingham County Shiloh Airport in Stoneville, N.C. It also is certified as Advanced Ultralight in Canada and is certified special light sport aircraft in the United States. The airplane can be equipped with a Rotax 912 ULS 80- or 100-hp engine, or a Jabiru 2200 85-hp engine. Its useful load is 441 pounds. 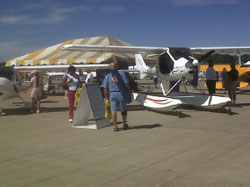 A Flight Design CT on floats attracts attention at the Midwest LSA Expo.

Airport manager Chris Collins, one of the organizers of the event that took place Sept. 23 through 25, said Thursday's attendance was double that of 2009's event. The Midwest LSA Expo was designed to provide potential buyers and people who are interested in what the LSA industry has to offer an opportunity to see and fly the aircraft without having to go to Florida or Wisconsin, he said. This year's Expo drew attendees from Wisconsin, Missouri, Tennessee, and Kentucky, among other places.

"It's easy to do a demo flight here," Collins said, noting that aircraft in the static display could easily be moved to the ramp. "[AirVenture] and Sun 'n Fun are such big shows that they can't experience the airplane and make the best purchasing decision," he said. On Thursday and Saturday mornings, the pattern at Mount Vernon-Outland was alive with LSAs.

The 2009 Expo had a rocky inauguration thanks to rain and cool, windy weather that kept many airplanes away. This year, however, bright sunshine and warm temperatures coaxed in the visitors. "Everyone here is interested" in light sport, Collins said. "They're educated. They're looking at a particular model."