Get the app Get the app
AOPA will be closed July 4th, in observance of the Independence Day holiday. We will reopen at 8:30 am ET on Tuesday, July 5.
News & Media P&ndash;51 legend Bullock dies 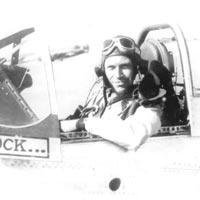 Frederick “Ted” Bullock, honored several years ago as one of the North American P–51 Mustang “legends,” died this past summer. He was honored at The Gathering of Mustangs and Legends in Columbus, Ohio, in 2007.

Bullock flew the British Spitfire in North Africa and flew the P–51 in North Africa as well as Sicily, Corsica, and Italy. He flew 70 missions and shot down three enemy fighters. He provided fighter cover for bombers during the Ploesti oil field raids.

He was one of the few pilots who could claim to have been struck by bullets from a fellow pilot. He later accidentally shot at the same pilot, but missed. The commanding officer of the two pilots declared they could not fly together again.