Get the app Get the app
Already a member? Please login below for an enhanced experience. Not a member? Join today
News & Media Eurocopter enters high-speed cruise arena 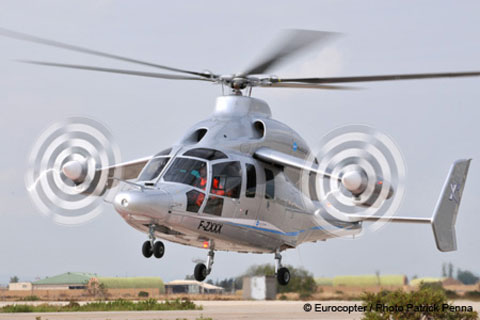 Helicopter manufacturers are feeling the need for speed, and Eurocopter has challenged Sikorsky’s 250-knot X2 Technology demonstrator with its own 220-knot demonstrator. The Eurocopter X3 demonstrator hopes to reach that speed in 2011.

The X3 demonstrator’s first flight occurred Sept. 6 in southern France at a flight test center. Initial testing will continue through December with reduced power, progressively opening the flight envelope to speeds of approximately 180 knots. After a three-month upgrade, X3 flights will resume in March 2011 with the goal of reaching sustained cruise speeds in excess of 220 knots.

It is called a hybrid because it utilizes two propellers for forward speed as well as the traditional rotor. The X3 demonstrator is equipped with two turboshaft engines that power a five-blade main rotor system and two propellers installed on short-span fixed wings.

The project has been in development for three years.