Get the app Get the app
Already a member? Please login below for an enhanced experience. Not a member? Join today
We will be performing maintenance on our systems Sunday, 5/22/2021, beginning at 12:00 A.M. ET and ending at 6:00 A.M. ET. During this time, you may experience intermittent service outages. We appreciate your patience.
News & Media PC-Aero&rsquo;s Elektra One eco-pioneer

Of the many electrically powered airplane designs that have appeared at Aero Friedrichshafen over the years, perhaps the new PC-Aero Elektra One shows the most promise. Designed and built by Romanian aeronautical engineer Calin Gologan, the Elektra One has already proven it can fly for up to three hours at a stretch, hit a max cruise speed of 86 knots, and fly for as much as 215 nm on a single charge of its lithium-polymer batteries.

At PC-Aero’s booth at Aero Friedrichshafen, Gologan explained that he began work on the Elektra One three years ago with the goal of optimizing it as a cruising machine. That’s why he gave the airplane a relatively short (28 feet, three inches) wingspan. But the wing’s unique profile, with its half-span sweep, turned out to have some remarkable characteristics. “I learned that I had developed a highly tolerant wing profile … it can fly at angles of attack as high as 40 degrees, where you can still use the ailerons, and still not stall,” Gologan said. “And besides that, it has good gliding characteristics, with a 1:25 glide ratio.” 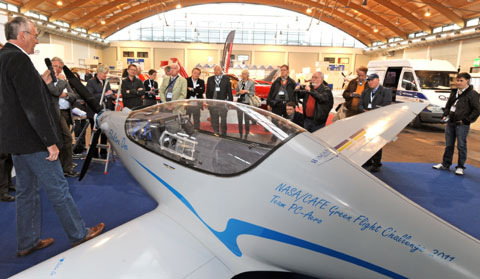 Power for the Elektra One comes from a 13.5-kilowatt (about 18-hp) electric motor built by Bamberg, Germany’s Geiger Engineering. Geiger also makes the Elektra One’s propeller and battery controller. The airplane has a single, manually retractable landing gear, two small wingtip wheels, and a variable-pitch propeller. Maximum takeoff weight is 300 kg (about 661 pounds), with a battery weight of 100 kg (about 220 pounds), and a max payload of 100 kg. “That makes this what I call a 100-100-100 airplane,” Gologan said. “It’s five times less noisy than a typical general aviation airplane, and it will cost just $49 per hour to operate.”

Right now, the Elektra One is a one-seater that will be certified under Germany’s ultralight regulations. But a two-seater is in the works, as is certification under the European Aviation Safety Agency (EASA), and then FAA regulations for conventional private aircraft. “That shouldn’t be a problem, because for years my work was as a certification engineer,” Gologan said. He expects certification by the end of 2011. His ultimate goal is a family of electrically powered airplanes. After Gologan obtains certification, his plan is to turn the marketing and sales functions over to NeoWings, a firm based in Augsburg, Germany.

The target price of an Elektra One? Approximately $140,000 under today’s exchange rates. Which is quite a deal, because the price includes not just the airplane, but also its specially designed hangar—which has a roof covered with a 65-square-foot bank of solar cells.