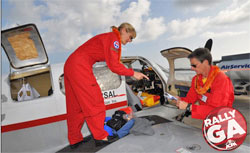 CarolAnn Garratt, the Ocala, Fla., pilot and author who has twice flown around the world in a personal campaign to eradicate Lou Gehrig’s disease, has opened a new chapter in her quest for the cure.

Garratt, who flew around the world in 2003 and set a world record for her seven-day, 160-hour effort in 2008, plans to round the earth again in 2011—but not at the hectic pace of her last trip. This year’s mission to raise research funds and awareness of amyotrophic lateral sclerosis (ALS) will include multiple country visits and numerous presentations before pilot groups. And she’ll have different co-pilots at different stages of the yearlong journey.

“Their excitement is starting to rub off on me,” she said in an interview.

Garratt doesn’t sugar-coat her assessment of progress in the battle to conquer ALS—understandable when you consider that Garratt’s own mother died in 2002 of the motor neuron disease that tends to strike people between age 40 and 70, and causes brain and spinal cord degeneration leading to muscle atrophy and death within a few years.

“At the opening of my presentations I always say that it has been seventy years since Lou Gehrig retired from baseball, and we are no further ahead now than we were then,” she said.

Making the disease even more tragic is that typical ALS patients die young, leaving behind young families. “They never see them graduate, never see them marry. It’s just really tough on the whole family,” she said.

Garratt was heartened last year when the ALS Therapy Development Institute discussed research addressing “immune system response not previously known to be associated with the progression of amyotrophic lateral sclerosis,” as described in an ALS-TDI news release. It said that the logical next step was clinical trials for the drug used in the research.

“So that’s great news,” Garratt said, expressing the hope that it was a step toward developing a treatment.

Assessing her own efforts with equal candor, Garratt says that fundraising hasn’t been her strong suit despite two books, “Upon Silver Wings: Global Adventure in a Small Plane,” and "Upon Silver Wings II: World-Record Adventure,” from which all proceeds go to the cause, and hundreds of presentations generating a combined $328,600. And she remains undeterred.

Tough economic times haven’t made it any easier to change conditions under which she says ALS research remains funded at levels she describes as ‘peanuts compared to everybody else.’

On April 18 Garratt was watching the weather along the eastern seaboard, where winter seemed reluctant to relinquish its grip except when powerful spring storms ripped across the landscape, spawning tornadoes by the hundred and wreaking havoc in the mid-Atlantic region. That weather was headed in the same direction as Garratt, who planned to fly her Mooney, twice proven on earth-rounding flights, to Boston by April 23, and then, after two days on the ground, head for Newfoundland. Weather permitting she hoped to land in Azores the following day.

Stops in Portugal and France would follow. Garratt said she plans to spend the whole summer in Europe, giving presentations about her record flight before aero clubs in Germany, England, France, Austria, and Switzerland. In contrast with Europe’s aero clubs, her appearances in the United States are typically before Experimental Aircraft Association chapters, she explained. Her planned route and the story of the previous flights are online. The new plan is quite a change of pace from the record dash of 2008 that “took 18 months of my life to plan, and then it was over in a week.”

Carol Foy, Garratt’s co-pilot in 2008, was not going along this year. Requests from other pilots have flooded in to Garratt, who despite a preference for flying alone, agreed to share the cockpit with different pilots at various times in the journey.

She admits that the excitement of those pilots has been contagious. Some of them are people considering round-the-world flights of their own, but don’t feel ready yet. “They kind of want to try a leg” in the company of an experienced long-distance flier fist, Garratt said.

On resuming the quest, Garratt explains that once ALS touches your life, you just have to do what you can to help beat the disease. She hopes that she can infuse aviators around the world with that same sense of urgency.

“I’m passionate about what I do about finding a cure for ALS,” she said. “And, I love flying, obviously.”