Get the app Get the app
Already a member? Please login below for an enhanced experience. Not a member? Join today
News & Media 'Gucci Girls' fly Air Force tanker 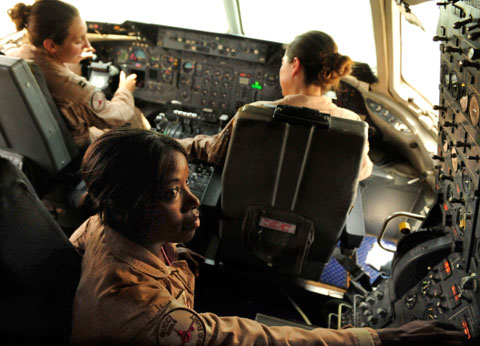 It took lots of arranging, since there is only one female Boeing KC–10 flight engineer in the U.S. Air Force, but for one mission an all-female crew operated an aerial refueling tanker above the Middle East. For this special event, they wore shoulder patches that said, “Gucci Girls; Unmanned KC-10 Flight.”

The crew took pleasure in telling fuel-hungry combat crews they were approaching an “unmanned” refueling tanker. KC-10 pilot 1st Lt. Jen Carter said the daylong effort was more about boosting morale than setting a precedent. It took place from an undisclosed base in the Middle East. The lone U.S. Air Force flight engineer is Staff Sgt. Sarah Lockley. “Today’s flight was awesome,” Lockley said, noting it was the first time reservists and active duty personnel have flown on the same aircraft.

“I've been in the Air Force for six years and it's almost impossible to get an all-girl flight,” said Staff Sgt. Lindy Campbell, a boom operator and flight air refueler for the 908th Expeditionary Air Refueling Squadron (EARS). “I’ve always wanted to do this. We work in a male-dominated career field, so when we figured it was possible to do it here, I jumped at the opportunity. It was nice to fly with my sisters.”

“It is a very rare occurrence,” said Lt. Col. Kenneth Moss, the 908th EARS commander. “While the number of women in the KC–10 has increased over the years, and every crew position has women represented, there is currently only one active-duty female flight engineer in KC–10, so this crew composition is extremely rare.”

Moss thinks events like this can serve as an example of just how far women have come in the military as well.

“I think it's great,” Moss said. “The role of women in the military has increased greatly over the years, and the presence of women in all [Air Force specialty codes] has expanded to the point that sometimes we forget how far they have had to come. However, my young daughter unintentionally reminds me every day that she needs women to look up to; she needs women to prove that nothing is impossible; she needs female role models. I think an all-female crew shows her that another potential obstacle to her dreams no longer exists.”

The aircraft commander noticed the group's chemistry was different than normal as well.

“It went well today,” said Capt. Lindsey Bauer, 908th EARS, KC–10 aircraft commander. “Nothing against guys, but we had a relaxing time. Having four girls in the cockpit was nice. We were all on the same level. It was a break from guys.”