Get the app Get the app
AOPA Members DO more LEARN more SAVE more - Get MORE out of being a pilot - CLICK HERE
News & Media Feats of flight: High-flying hybrids

Hybridization isn’t just for automobile designers and growers of world-record pumpkins anymore. When it comes to what was making news in the world of creative flight designs in 2011, it’s hard to get far into descriptions before you are faced with the need to talk about hybrids.

Maybe we can borrow from the music and culinary worlds, and try out the word fusion as an alternative term for the blending of distinctive styles into new concepts and genres. Call them what you choose. From a human-powered helicopter, and a jet-powered human, to a vehicle that is either a flying car or a streetwise aircraft, hybridization was all over the place. Even a landmark development of an almost conventional aircraft—Sikorsky’s X2 helicopter—which had broken onto the scene the previous year having met a design goal of achieving performance in a realm previously associated only with fixed-wing turboprop airplanes, continued pushing back the frontiers, and went on a national tour in 2011.

The fundamental things still apply, even when innovation is setting records. In 2011 the Fédération Aéronautique Internationale (FAI) certified a record for human-powered helicopter flight for two flights made by University of Maryland student designers, with Judy Wexler, a lightweight bicyclist, providing the power. Picture four 42-foot rotors at the ends of 60-foot crossing bars, with the pilot seated at the center of it all. The team, some now graduates, built a machine named Gamera (after a flying turtle) which, after achieving flight, claimed world records for flight duration, and flight duration with a female pilot. The FAI certified a May 12 flight of 4.2 seconds, and a July 13 flight of 11.4 seconds, which superseded the first. The design and construction team for Gamera included about 50 students from the university’s Clark School of Engineering. Wexler is a biology student.

If the highly hybridized-appearing object you behold looks something like a cross between an agricultural combine harvester and a helicopter, you must be in the presence of the FanWing. Its developers are designing their creation as a two-seat light sport aircraft that they hope to fly publicly for the first time at EAA AirVenture in Oshkosh, Wis., in 2013. Patrick Peebles’ design basically puts a long fan inside a thick wing. That configuration accelerates the air twice, and provides both lift and thrust. With two engines and the capability to autorotate (there’s that helicopter DNA again) its theoretical efficiency is generating a lot of scientific excitement as the American designer’s ideas undergo R&D in the United Kingdom and Italy. Expect a static display at Oshkosh in 2012 of the 22.9-foot long demonstrator that is believed will cruise at 60 knots, as development and financing efforts continue. A remote-controlled prototype with a 5.57-foot wingspan began to fly in June.

In the beginning there were gas-driven cars and an irresistible drive to make them fly. Then there were hybrid powered cars—and yes, now there’s one that flies. That brings renowned aircraft designer Burt Rutan into the conversation, and before you rush to add the prefix “retired” to his name, the story of the BiPod hybrid must be told, which AOPA Pilot Editor at Large Thomas A. Horne did in this AOPA Online article.

Something that the design’s emergence confirmed was a Rutan remark that when he left his Mojave, Calif.-based company Scaled Composites for retirement in Idaho, one of three pieces of furniture he left behind in Mojave was his drafting board.

On it, the BiPod was born, with all-fiberglass design including a 31.8-foot wingspan, twin-boom fuselages carrying one occupant each (the pilot in the right fuselage), and twin pusher props each driven by a six-pound, 20-horsepower electric motor. Power for the motors comes from 16 lithium ion phosphate batteries of 24 cells, charged by a four-stroke motorcycle engine. The hybrid has a takeoff weight of 1,430 pounds. Wings fold for use as an auto. In town the BiPod should range 35 miles on electric power only. At 65 mph on highways, Rutan predicted 820 miles.

Will the BiPod fly beyond its early ground-effect tests? Undecided, said Rutan when interviewed. Of course he has been equally opaque about retirement, noting that he has made “a design a year since 1973.”

It’s been known for a long time: There’s a performance wall that has limited helicopters to airspeeds in the range of 160 knots. Want to shake up that conventional wisdom? Dare an engineer to design a machine that can leave that barrier in its churning wake. Better still, make the dare and then tell that engineer that the task isn’t possible. 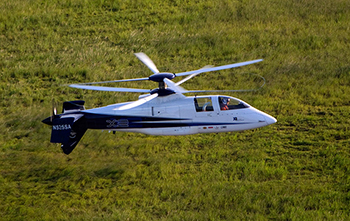 If that story line sounds familiar, and someone replies, “It’s been done,” you will know that they are talking about Sikorsky’s X2, a dual-rotor helicopter that not only punctured that seemingly invincible barrier limiting helicopter performance, earning its team a 2010 Collier Trophy, but raced through that barrier and left it far behind, achieving speeds more commonly associated with fixed-wing turboprop aircraft. During a national tour in 2011, the X2 was on display at AOPA Aviation Summit in Hartford, Conn., in September.

The X2’s development is a story— rendered as high entertainment in the October 2011 AOPA Pilot feature “Swamp Pirates” by Senior Editor Alton K. Marsh—not only about a technological achievement but about an inspired team of designers and the challenge to which they rose. It’s a story of character (and characters), teamwork, inventiveness, and the kind of organizational support that can and does lead to great things.

The next time someone tells you that they backpacked around the Grand Canyon, go ahead and ask if the backpack was jet-powered.

Then tip your goggles to Yves Rossy, who it would be impossible to ignore when reviewing the fabulous feats of flight featured from the outgoing year. Whether he was jet-packing about the canyon, or flying in formation above Swiss Alps with the Breitling Jet Team, flying the English Channel, or performing other astonishing individual achievements in flight, Rossy—also known as Jetman—captured aviation’s imagination and kept audiences spellbound for much of the year.

“Skimming the rockscape at speeds of up to 190 mph, Jetman sustained flight for more than eight minutes, 200 feet above the rim of Grand Canyon West. To end the flawless precision flight, Rossy deployed his parachute and gracefully descended to the canyon floor,” said this May 2011 account of his canyon flying, which had been suspensefully delayed by a combination of paperwork details and Rossy’s desire to get in some more practice—always a good piloting decision.

Why does he do it? Soaring through the air with total freedom is “a dream everybody had at least one in their life,” he said.

With the innovative feats engineers and aviators reached this year, we can’t wait to see what will emerge in 2012.