Get the app Get the app
Already a member? Please login below for an enhanced experience. Not a member? Join today
We will be performing maintenance on our systems Sunday, 5/22/2021, beginning at 12:00 A.M. ET and ending at 6:00 A.M. ET. During this time, you may experience intermittent service outages. We appreciate your patience.
News & Media Eyes above the forest

Eyes above the forest

This Vulcanair prowls the darkness above Florida, looking for trouble.

A single light flickered on and off in a wildlife preserve where there is no electricity. It was spotted by a Florida Fish and Wildlife Commission (FWC) pilot overhead wearing night vision goggles. He alerted an officer on the ground, who approached the scene without headlights, switching instead to “sneak lights.”

“Keep going, keep going,” pilot Joe Johnston told the officer. “Stop right there, Sam. Right out your window about 50 feet is a light that comes on every now and then.” About 20 minutes later the ground officer reported that a suspect was under arrest. It was a man recently released from prison who had hidden in the forest to smoke crack cocaine. The light came from the flame that flickered each time the rock was lit, lighting the car interior faintly, but easily spotted by Johnston at 7,500 feet.

It happened six days before I arrived in Tallahassee to do a story on FWC’s Italian-built twin-engine Vulcanair. FWC pilots are unique in two ways; they all are law enforcement officers and can arrest you for traffic violations on their way home after a day of protecting a forest. Second, nearly all the suspects they apprehend are armed. FWC officers hope a weapon is found because it provides the proof needed to make the case against illegal hunting, whereas most law enforcement officers in the country are hoping that a suspect is not armed. 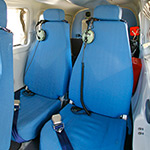 Powered by a pair of 200-horsepower Lycoming IO-360 engines, the Vulcanair had flown four search-and-rescue missions in the Gulf of Mexico prior to the interview and four flights to spot night hunters, as deer poachers on state and federal land are called. One of the rescue missions came as part of a coordinated effort involving a U.S. Coast Guard cutter and jet, two U.S. Air Force C-130s (one used to refuel helicopters), and two Air Force helicopters.

Ten days later, an all-FWC search using the six-seat Vulcanair (with the installation of a bench, it is certified for seven) and three FWC boats rescued three fishermen after they were spotted from the Vulcanair by Officer Frank Utermohlen with FWC Aviation Section Administrator Kevin Vislocky flying.

Utermohlen usually flies the Vulcanair, but this time he was along as the eyes of the search. The boat’s engine had quit in the Gulf of Mexico a few hours after it went out on a Sunday fishing trip, causing the boat to drift until the following Thursday. It started taking on water just an hour before it was spotted, said Utermohlen. He is FWC’s aviation safety officer. When Utermohlen and Vislocky landed after seven hours, the Vulcanair still had 45 minutes of fuel in the tanks.

On another mission, Utermohlen watched from the Vulcanair as two truckloads of hunters ran from officers he had alerted, and then turned off the road in the dark and hid their weapons in trees. Using night vision goggles, he guided ground officers to the trucks, then the fleeing suspects, and finally the trees where the weapons were hidden. Officers confiscated the trucks since they had been used in a crime, and discovered drugs inside. 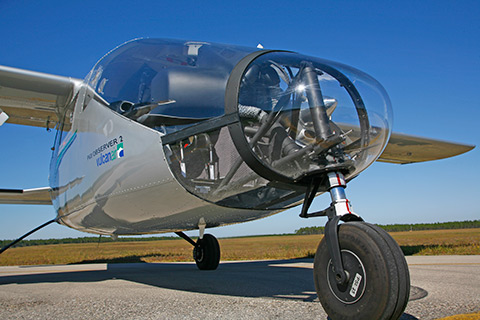 The fixed-gear Observer 2 model used by FWC was purchased in 2002 and has a clear acrylic nose, making it perfect for search missions. The great view has one disadvantage, however: The pilot can clearly see the runway rushing up to meet the aircraft during landing. With the pilot’s seat only two feet above the runway, pilots new to the airplane tend to flare high. On the plus side, when was the last time you inspected your nosewheel strut all the way to the attach points and beyond?

Formerly known as Partenavia, that company was taken over by the Italian government but later was purchased by a private family and then renamed Vulcanair.

If you have already skipped to the specification table (below) and noticed the $823,700 IFR-equipped price, an explanation is in order. Obviously this is not an impulse buy you make on your way to the grocery store to pick up a loaf of bread. That price is only for the Observer 2 model; most are purchased by state agencies to be a workhorse performing fish and wildlife surveillance or mapping. It is a surveillance platform with a camera port and can also be equipped with forward-looking infrared capability. 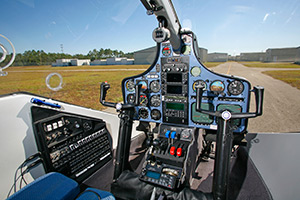 The model marketed to you, Mr. Regular Joe Consumer, is the lighter, retractable Vulcanair VR with an IFR-equipped price of $749,000 that includes a Sagem Avionics Integrated Cockpit Display System (ICDS) glass cockpit and a ram-horn control yoke, like some of the big-iron jets. (It does not have the clear acrylic nose.) It comes with dual Garmin 430 GPS/nav/com radios, a Garmin 327 transponder, a six-place intercom, a Garmin GMA 340 audio panel, and an S-Tec Fifty-Five X autopilot. It has back-up micro steam-gauge instruments.

The workhorse of the line is the P68C without the clear acrylic nose for an IFR-equipped price of $764,500 and includes turbocharged engines as an option. There’s even the Vulcanair A-VIATOR twin-engine turboprop with an IFR glass cockpit for $2.2 million.

As with any airplane you may consider purchasing, or dream about, the burning question is, “Can I land it?” Can you land a Cessna 152? Same thing. The Vulcanair is no more difficult to land than a primary trainer.

Pilots new to the airplane think it floats during landing, but more experienced pilots say it has outstanding short-field performance. The narrow gear initially raised questions as to how it would land in crosswinds, but the winds at Tallahassee Regional Airport were at 80 percent of the maximum crosswind capability of the airplane at the time I flew it, and it handled them with no difficulties. It is highly stable at slower airspeeds such as those used by the FWC when circling over a subject, like an illegal hunter sitting in a tree periodically shining a light to locate deer.

Utermohlen compares the preflight to that of a Cessna 182. “The only quirk to this aircraft, because we have the extended-range tanks on it, is that the tanks are far enough outboard that when you [begin fueling] one side you’ll get a pretty good air bubble on the inside of the tank towards the fuselage. So you then have to go to the other side of the aircraft and fill that tank completely, then come back and top off the first tank.” 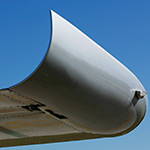 There is one fueling port on each wing, well outboard and less than a foot from the wing tip. With optional tanks, the aircraft can fly for more than 10 hours.

Because of the narrow gear and the widely spaced fuel tanks, the aircraft will often develop a waddle during taxi. In fact, it began a slight waddle during high winds sitting on a taxiway to be photographed for this article.

Utermohlen commented during the takeoff roll that acceleration was slower than some aircraft, but it seemed more than adequate to me from the way the runway center stripes were strobing beneath my left knee. He said he flight plans for 145 knots KTAS, so we checked it.

With Utermohlen setting typical cruise power and the autopilot flying, I calculated 145.2 KTAS. It is very comfortable in the tight turns used to remain over a boat for surveillance or rescue, so we did that, picking out an unsuspecting fishing boat and staying overhead through two turns. Stalls showed no abrupt wing drops or rapid changes in pitch attitude.

An engine failure is more of an annoyance than an emergency. Heading back to the airport I noticed a sudden yaw, thinking it might be turbulence, given the winds that day. I stopped the yaw with rudder and checked the ball to see if just maybe Utermohlen had simulated the failure of an engine; he had, yet there was little change in the flight attitude. Without going into a multiengine aerodynamics explanation, the engines are so close to the fuselage that single-engine operations produce little yaw.

“You rotate the aircraft with 15 degrees of flaps around 72 knots, and it will fly off around 78 or 79 knots,” Utermohlen said. “It doesn’t fight you too much getting off the ground. It’s a pretty stable aircraft. Normally when I climb out I am wanting to go somewhere, so I will climb out at 100 to 110 knots—more like a cruise climb.” Best rate of climb is 92 knots.

“Downwind you fly at 110 to 115 knots. Usually that is also with 15 degrees of flaps, and as you turn base it is just a decelerating turn to final, maintaining above blue line of 92 knots until you are on short final. You are dropping flaps to a full 30 degrees. At 111 knots you can go to full flaps on the aircraft. On short final you should be at 75 to 78 knots and decelerating as you’re coming across the numbers,” Utermohlen said.

There’s no bad news in the way of repetitive airworthiness directives. In 1985 there was an AD calling for inspection of wing spar caps—at the attachment point for the wings—on aircraft built by the former Partenavia company. Now, the spar cap on Vulcanair aircraft is beefier and the AD is gone, at least for newly manufactured aircraft. A requirement for inspection remains for Partenavia aircraft.

Are there any problems at all with the Vulcanair? At the time of the interview the alternators weren’t sharing the electrical load, and when sliding the pilot seat a few feet rearward to make entering the aircraft easier, the seat came off the tracks a couple of times— but was easily reattached.

FWC pilots consider the Vulcanair as capable as their helicopters when it comes to search and rescue, hunting for marijuana fields on federal or state land, or stalking the deer stalkers, but at a much lower purchase price and operating cost. As for the crack smokers who hide in the forest, whatcha gonna do when the Vulcanair comes for you? 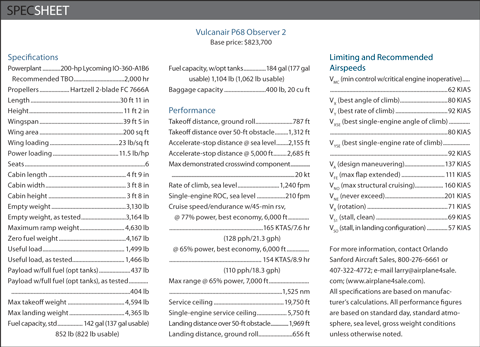