Get the app Get the app
Already a member? Please login below for an enhanced experience. Not a member? Join today
News & Videos Understanding V1

One of the many things a first-time jet pilot learns in training is a set of entirely new speeds—V1, V2, and VREF just being a few. To make the issue even more complex, different manufacturers sometimes call the same speed by different names; what Embraer calls VFS, Cessna calls VENR.

Why smoke hoods are a good idea 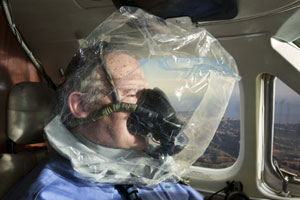 A smoke hood can protect you from noxious fumes in the event of an in-flight fire. Some models are designed to slip over the existing oxygen mask (below); others provide their own oxygen supply.

In last month’s Turbine Pilot we discussed dumping cabin pressure (“ System Synopsis: Dumping Cabin Pressure,” January 2011 AOPA Pilot), and the reasons why this drastic action may be necessary. One of them was smoke in the cabin. The checklist for smoke in the cabin often calls for dumping the cabin pressure, which should empty the smoke as the pressurization outflow valves open and air makes a rapid exit. Then it’s time to don oxygen masks and make an emergency descent to a lower altitude in order to reach breathable air. Assuming the smoke clears, your main problem is the resulting high fuel consumption rate at the lower altitude.

But what if the smoke doesn’t clear? What if it persists, or becomes denser? Now the situation is truly dire. You must get on the ground—preferably at an airport—when your vision may be compromised. You may be wearing oxygen, but smoke can blind you. And toxic fumes can incapacitate your passengers.

That’s why it’s a good idea to carry smoke hoods. Smoke hoods slip over your head—oxygen mask and all—and prevent smoke from affecting your eyes. Required for airline operations since the 1980s, smoke hoods are becoming more popular in corporate and personal turbine operations. There are two styles of smoke hoods—one for pilots, and one for passengers and cabin crew.

The pilot protective hood is meant for use with the cockpit’s emergency oxygen masks. It is essentially a Teflon-treated transparent bag that can be slid into place in approximately two seconds, says Essex PB&R (Protective Breathing and Rescue—a St. Louis firm with a major presence in this market). A silicon neck seal keeps the smoke out. Each pilot protective hood sells for $300, and is good for 10 years. After that time, the unit must be replaced.

For passengers and cabin crew, a different smoke hood is required. Essex gives its FAA-approved PBE (Protective Breathing Equipment) hood a 15-minute oxygen supply. You pull on the hood, yank on an oxygen cord, and the oxygen flow begins. This hood, also fitted with a neck seal, sells for $850, and must also be replaced at 10-year intervals.

As accident investigations have shown, smoke can be more dangerous than fire. Whether you choose an Essex model, an Aeromedix, or a Parat-C, smoke hoods are good investments. The FAA may not mandate them for use in private or corporate turboprops or jets, but if all hell breaks loose you’ll be glad to have them aboard. —TAH

One of the many things a first-time jet pilot learns in training is a set of entirely new speeds—V 1, V 2, and V REF just being a few. To make the issue even more complex, different manufacturers sometimes call the same speed by different names; what Embraer calls V FS, Cessna calls V ENR. Most pilots struggle through these new performance considerations along with a raft of other new topics, and often they understandably come out with a shaky grasp of just what exactly these new speeds represent.

V 1, for example, is the very first V speed a jet will encounter as it transitions to flight, yet many pilots have an erroneous picture of what this critical speed represents. Ask the average jet pilot to define V 1, and he or she will respond along the lines of, “V 1 is takeoff decision speed—the highest speed at which the plane can have an engine fail during takeoff and abort on the runway in the space calculated, or continue the takeoff on one engine.” This statement is almost universally accepted—and is completely false.

The critical fallacy lies in the assumption that V 1 represents a decision speed of sorts. Most pilots believe that if an engine fails at V 1, the pilot is given a space of time (three seconds is often claimed) to recognize the failure, then begin the process of aborting the takeoff—bringing the thrust levers to idle, initiating braking, deploying speed brakes or spoilers. The FAA definition of V 1 is very different.

FAR 1.2 defines all the V speeds a pilot could ever use. Telling about the complexity of V 1 is that while most speeds are defined in just a few words—“V R means rotation speed,” “V 2 means takeoff safety speed,” the definition for V 1 runs for two lengthy sentences. That definition reads, in part, “the maximum speed in the takeoff at which the pilot must take the first action (e.g., apply brakes, reduce thrust, deploy speed brakes) to stop the airplane within the accelerate-stop distance.”

Clearly, if the pilot must take the first action at V 1 in order to stop in the calculated distance, the decision to abort must have been made well before V 1. It also follows that if an engine fails at V 1, there is no way a pilot could instantaneously recognize the failure and initiate the abort.

Indeed, the highest speed at which an engine can fail on takeoff and still allow for an abort within accelerate-stop distance is not V 1 at all, but a speed most pilots have never heard of—V EF or engine failure speed. V EF is not published by aircraft manufacturers, but rather is used during the testing that determines the V speeds, which are published.

The most critical engine is failed at V EF and the airplane continues to accelerate on one engine while the pilot recognizes that the engine has failed and makes the decision to abort. Once the test pilot initiates the abort, that speed is noted and becomes V 1.

The practical implication of this distinction is that once V 1 has been reached, it is too late to initiate an abort within the runway distance calculated. Unfortunately, as V EF is not published, it is impossible to know exactly when the moment passes that would allow for a successful abort.

For this reason, many operators call “V 1” aloud at five knots before V 1, not at V 1 itself. Once the flying pilot hears “V 1” spoken, the hand on the thrust levers is moved to the control yoke, signifying that from that point on, no matter what occurs (barring a fire or other specified emergencies), the airplane will be taken airborne.

It is also important to understand that during the aircraft testing for calculation of accelerate-stop distances, the speed never gets above V 1. Every second that an airplane is accelerating beyond V 1, the energy the brakes would be required to dissipate during an abort increases as a function of the square of the speed increase.

If we put some numbers to this abstraction, let’s consider the case of a light jet departing at maximum takeoff weight, with a calculated V 1 of 105 knots. Just as V 1 is reached, and the pilot erroneously thinks he has his last chance to decide to abort, a loud bang is heard, and the airplane pulls to one side.

Unfortunately for the pilot, rather than the perceived engine failure, what has actually occurred is a tire blow-out. During the few seconds it takes the pilot to react, both engines—not one—are producing takeoff thrust, and continuing to accelerate the aircraft past V 1. If the airplane reaches a peak speed of only 10 knots beyond V 1, the brakes must now dissipate 20 percent more energy than had the abort been initiated at V 1. 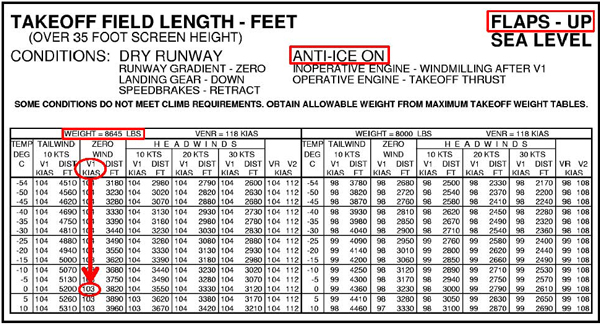 Beyond the fact that there is no certification requirement for the brakes to be able to absorb any energy beyond that existing at the highest weight and V 1 combination demonstrated, there also is no performance data to know how much runway would be needed even if the brakes are able to handle the extra energy. Adding to the chaos, one brake must now absorb all the energy of the aircraft, as the blown tire’s brake has been rendered useless.

Unfortunately, many rejected takeoff (RTO) accidents have been caused by such a set of circumstances. One industry study found that 80 percent of RTO accidents were avoidable, and the accident airplanes would have been able to safely continue the takeoff with the problem in effect.

For this reason, most jet operators use a two-phase abort decision tree. Up to a specified airspeed, usually 70 knots for light jets, the takeoff can be aborted for any reason. Above this speed and before V 1, if the runway available is less than the runway required plus a defined safety margin (often 50 percent), the takeoff will only be aborted for an engine failure, engine fire, or the perception that the aircraft is unable to fly.

When there’s a loud bump right at V 1, a pilot has no way of knowing for sure what has occurred, or the safest course to take. But history and certification requirements point to continuing the takeoff as the path most likely to lead to a happy outcome.

Neil Singer is a Master CFI and a mentor pilot in Cessna and Embraer light jets.