Get the app Get the app
Already a member? Please login below for an enhanced experience. Not a member? Join today
News & Media Aircraft inspections: You have choices

Aircraft inspections: You have choices

Getting into the right phase

Life changes when you acquire a turbine-powered aircraft. Now you’re flying higher, faster, and probably farther than you ever did in your piston-powered days. 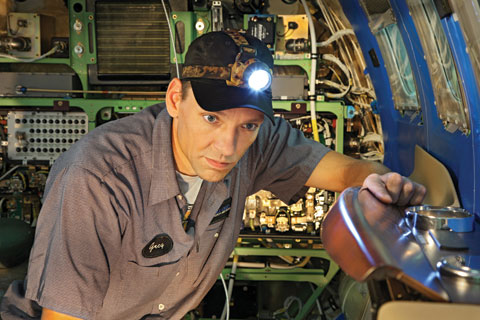 Life changes when you acquire a turbine-powered aircraft. Now you’re flying higher, faster, and probably farther than you ever did in your piston-powered days. It’s a different world regarding inspections and maintenance as well. If you operated your piston-powered airplane for business and personal use only and not for hire or for flight instruction, most likely you had it inspected once a year—the annual. It’s not quite that simple or straightforward when you move up to turbine power.

Federal Aviation Regulation 91.409 lays out the requirements for aircraft inspection requirements for all types of aircraft, including those with turbine power. As noted, piston-powered aircraft are subject to annual inspections. The scope and detail of the annual is dictated by Appendix D of FAR 43: Maintenance, Preventive Maintenance, Rebuilding and Alteration. The CliffsNotes version of Appendix D: Once every 12 months, expose the innards of the airplane as much as possible, and inspect everything.

Surprisingly, FAR 91.409 allows for a privately operated turbine-powered single such as the Pilatus PC–12 to be inspected once a year using Appendix D scope and detail. However, given that Appendix D has its origins in the tube-and-fabric era, a standard-issue annual may not be the most prudent inspection strategy. Your insurance underwriter probably would give that notion a thumbs-down, too.

Instead, most single-engine turbine operators do what multiengine turbine operators are required to do under FAR 91.409: choose one of four inspection program options to be placed in Chapter 5 of the aircraft maintenance manual. Three of the four are tailored more for high-utilization and/or commercial operators. The owner of a privately operated (not-for-hire) turbine aircraft that flies at most a few hundred hours a year likely will opt for an inspection program that is designed and recommended by the airframe manufacturer. 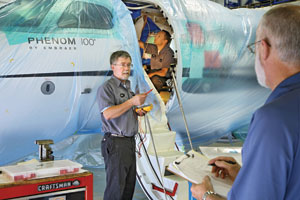 You can design your own inspection program and submit it to the local FAA Flight Standards District Office for approval, but it stands to reason that the feds will more readily sign off on a manufacturer’s recommended program than a custom, one-off proposal.

Different manufacturers take different approaches when recommending inspection programs to owners. Pilatus, for example, has one that calls for an inspection after 150 hours time in service, followed by an annual inspection. That’s a Pilatus-designed annual, not the Appendix D scope and detail procedure. If the airplane flies more than 150 hours in 12 months, it gets two separate inspections. If it flies less, the 150-hour and annual are combined into one inspection event.

Embraer has a recommended program for the new Phenom 100 that calls for a complete inspection every 600 hours time in service or annually, whichever comes first. 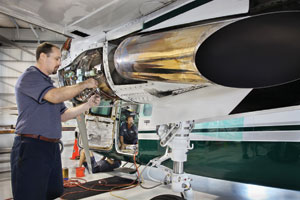 The complete inspection program detailed in Chapter 5 of the Citation maintenance manual may cover some 55 phase inspections, including some that don’t come due until 10,000 hours time in service and then every 3,000 hours after that.

Regardless of which inspection program you choose for your turbine aircraft, FAR 91.409 also requires that you heed mandated inspection intervals for life-limited parts and components. An engine hot-section inspection is a good example. The landing gear is another component that, on many turbine aircraft, is subject to special inspections at intervals that fall outside the schedule applying to most of the rest of the aircraft.

Turbine aircraft are built and operate to different standards than light piston-powered aircraft, so it’s to be expected that there’s a higher level of care required as well. That care begins with the formal inspection, using whatever program the owner has chosen to follow.

Mark Twombly is a writer and editor who has been flying since 1968. He is a commercial pilot with instrument and multiengine ratings and flies a Piper Aztec. Photography by Randy Smith