Pilot conversations at Sky Manor Airport (N40) in Pittstown, New Jersey, one afternoon didn’t focus on fun places to fly or good airport restaurants. Instead, the topic was the future of their home field. 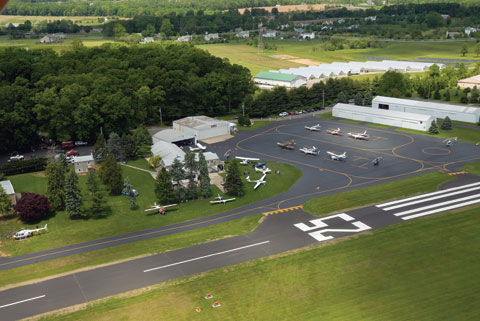 One pilot still wanted answers to those questions after the discussion. Rob Marookian grew up in Hunterdon County, in west-central New Jersey. As a youth he had spent a lot of time at the airport, where there were many social activities going on. There was a pool, a restaurant, and all that airplane activity. Someone noticed Marookian and gave him his first flight. As a teenager in 1978 he began flying lessons, but finances and, later, a new family took priority.

Years later, his children grown and financial concerns behind him, Marookian in 1999 acquired his private pilot certificate. Five years after that he earned an instrument rating. But now it looked like the airport might change dramatically—or disappear altogether.

Marookian had an idea to purchase the airport. He approached a group of Sky Manor pilots that he knew well, hoping the idea would appeal to them. They were interested; they had the same concerns regarding their airport and realized that they had to act quickly. The current airport owner had gotten into financial difficulty, and several prospective buyers for the property had surfaced. Instead of an immediate sale or foreclosure, however, the airport was placed into receivership and a court-appointed accounting firm took charge of day-to-day operations—and with the proper handling of revenues, the airport was sustaining itself, which reduced the possibility of foreclosure. 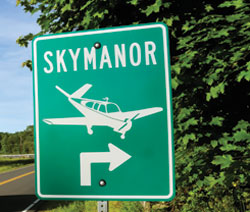 Marookian and the small group of pilots began working on a business plan that would keep the airport in the black after they purchased it, proving to the bank and any additional investors that they could keep the airport solvent. They analyzed the hangar rents, utility bills, taxes; what was the realistic cash flow? A proposal and business plan were put together for other local pilots.

The first formal meeting was held in the basement of Adam Silverstein’s house; Silverstein was very familiar with the airport, having earned his certificate and flown gliders for a business based there in the mid-1980s.

The rough plan called for cash to be deposited in the bank to show that the pilots were serious. Additional money would be needed at closing for a substantial down payment. As soon as the money was in the bank, an offer would be made to purchase the airport and a contract signed. The details of exactly how the airport would be owned and managed were yet to be determined.

At the end of the meeting, each pilot Marookian initially contacted wrote a check to show that they were serious and believed in the idea. Other pilots made verbal commitments, and discussions continued over the following weeks. Many “what-if” situations were considered. What condition is the airport really in? How much time is each member willing to devote? How do you anticipate the unknowns? As personal decisions were made, the group changed somewhat and became the founding members.

Each of the founders had an area of expertise—finance, sales, marketing, or engineering—and two were in the construction business and could accurately assess the condition of the airport buildings and facilities. An attorney was retained, and Sky Manor Airport Partners LLC—fondly known as SMAP—was formed. An initial letter of intent outlining the company’s intention to purchase the property was sent to the airport owner and the bank. The founding members, now joined by about 20 more sponsors, were ready to move forward.

Local businessman Rich Leone, one of the founders, brought his business and financial expertise into the picture. Three years earlier, he had considered what it would take to purchase the airport and shared his financial findings. The original plan was a stretch and the airport would be undercapitalized. The bottom line: A slightly larger prepurchase commitment would be needed from each person.

Enough money for the deposit was collected that night from the interested parties and deposited the next day. It was considered a pledge to pay the additional monies before closing. These initial participants understood that if the deal fell through they would get their money back, less any legal expenses incurred. No papers were signed, no contracts were drawn up, just an old-fashioned handshake and a “let’s do it” attitude.

The next week the founding members met with representatives of the owner and delivered a revised letter of intent.

The concept of an exit strategy had to be an integral part of the final plan. It would allow pilot-owners to sell their position, at any time. The founding members considered a condominium or co-op model, which meant each individual owner would actually own a piece of real estate—surveys would have to be done and individual deeds drawn up, and there were tax implications. A land-lease agreement was considered, but dropped—what would a membership be worth if it only had five years left on a 20-year land lease? 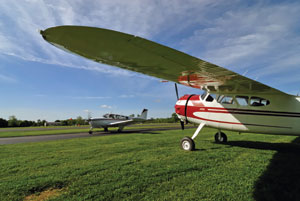 The atmosphere at the airport is one of a casual and friendly club in the country, so a club membership concept was investigated. But the LLC did not want to buy back memberships, and the idea of a member walking away with nothing was not an exit strategy at all. So the idea of letting an owner sell his membership came about. While there may be some risk in this, there also may be some benefit—especially if the owner can sell the membership for more than its original cost. Consider that renting a hangar at $400 a month for 15 years will cost $72,000; buying a membership, even if it’s eventually sold for less than the purchase price, puts the owner ahead of the renting game. Additional pilots realized this, and became “investing-members in the limited liability company.”

A contract was drawn up and signed, and things were moving at a quick pace. Due diligence had begun and property appraisal, well-water tests, septic inspections, environmental inspections, and building inspections all were under way.

Next, a meeting was set up with the New Jersey Department of Transportation’s Division of Aeronautics. The founding members wanted to discuss their purchase of the airport and future transfer of the state license. Additional discussion topics included grants and operational considerations at the airport. Don Kugler was selected as the point of contact with the division. He was familiar with the state and federal rules and regulations for airports, and well versed in the funding and grants process. The division was pleased and promised to be supportive.

While the regulatory topics were being handled, the economy was spiraling downward. The due diligence identified some problems with the property that would be expensive to correct. Was the airport still worth the original contract amount? The issues could allow the contract to be terminated—or serve as a bargaining chip.

Craig Johnston had negotiated extensively to produce the first contract and now faced the challenge of renegotiating the contract for a lower purchase price. Late one October afternoon, he presented the revised proposal to bank representatives, who said “No.” While the team was frustrated, there weren’t any other viable offers for the property, and Johnston wasn’t convinced it was the final answer. And during a phone call around 10 the next morning, the answer became “Yes.” With a verbal agreement in place, a new contract was drawn up and signed.

In less than two weeks all the additional monies were collected and deposited in the bank account. The pilots planned to pay approximately one-third of the purchase price and mortgage the balance. Again, no contracts were signed, just a gentleman’s handshake. While the founding members felt the burden of holding everyone’s money, they also felt the trust and commitment of their fellow pilots.

The sale finally closed on November 24, 2008, and a group of pilots and hangar tenants owned the airport. “It is their desire to see the airport grow and prosper while maintaining the ‘country club’ atmosphere for which Sky Manor is famous,” says the airport’s website. The NJDOT Division of Aeronautics issued a facility license to Sky Manor Airport Partners LLC on December 9, 2008. 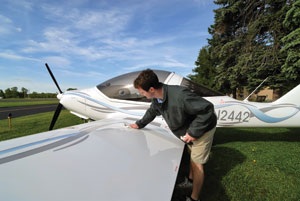 Repairs and maintenance began immediately. Founding member Paul Ruo, in charge of the fuel farm, realized that with the proper purchasing of fuel, he could increase fuel profits. He found a new fuel vendor that was willing to work with the airport, offering full maintenance of the pumps and tanks—and a lower fuel cost, as well. Because those savings are shared with customers, Sky Manor has almost doubled its fuel sales. The airport restaurant contributes to the airport’s destination appeal. “It’s the cheapest $100 hamburger around,” Ruo says.

At a meeting on April 15, 2009, all of the purchasers were presented with a two-inch-thick package to review and sign. Thicker than most mortgage agreements, it contained all the documents that made up the formal offering to become a member in the company—and a last chance to back out of the purchase for anyone who was not comfortable. One pilot signed the agreement on the spot and handed it right back, saying that since he trusted the founding members with a handshake and his cash months earlier, why shouldn’t he trust them now?

Nobody backed out, and all the original participants became members of the limited liability company—similar to being a shareholder in a corporation. The airport had been running smoothly and pilots were happy with the improvements on the field. With the corporate structure and ownership details in place, the company opened a second round of membership offerings to all pilots on the field. Today nearly half of the resident pilots are owners and a good portion of the purchase price has been paid off.

The successful rescue of Sky Manor Airport began with the hard work and dedication of a small group of concerned pilots. It became a reality when the rest of the airport’s pilots came to believe in that idea—and in the airport’s founding members. One job wasn’t anticipated, however—addressing questions from pilots across the country who have a similar interest in saving their airports. Perhaps this successful model will be duplicated elsewhere.

Karen Candiani is an assistant professor at Embry-Riddle Aeronautical University and director of the Charlotte Aerospace Institute in Port Charlotte, Florida. She is an instrument-rated private pilot and holds a commercial lighter-than-air rating. Photography by Mike Collins