Get the app Get the app
AOPA Members DO more LEARN more SAVE more - Get MORE out of being a pilot - CLICK HERE
News & Media AOPA 2011 Crossover Classic Sweeps: The Ultimate Skylane

Built for fast or slow, high or low&mdash;and for you

We’re in the home stretch. Before long, the keys to the Crossover Classic will be handed over to the lucky winner of AOPA’s 2011 Sweepstakes.


We’re in the home stretch. Before long, the keys to the Crossover Classic will be handed over to the lucky winner of AOPA’s 2011 Sweepstakes. But that won’t be until September, at this year’s AOPA Summit in Hartford, Connecticut. There’s still time to join AOPA or renew your membership by July 31 for your chance to win. Right now, the airplane is in its final stages of completion, so it’s a good time to review all the restoration that it has had over the past 11 months.

We began the sweepstakes process as we always do—by identifying a candidate airplane and searching for a suitable airframe. First, we wanted to return to the tradition of restoring an older airplane. Members always seem to like following a restoration project. It gives them ideas for upgrades to their own airplanes, and, well, it’s just fun to vicariously enjoy the thought of bringing your own aging airplane up to modern standards. 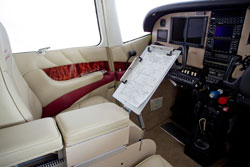 We wanted an airplane that would be capable and easy to fly by just about any general aviation pilot. And it couldn’t have any major damage history or serious corrosion. We found that airplane last August in Middletown, Ohio, where owner Tom Wortley kept his 1974 Cessna 182P. Wortley reluctantly parted with his Skylane (he’d owned it for 35 years) after prebuy specialist Don Sebastian made sure it was fit for duty, and yours truly took the airplane to its first stop in the restoration process.

This first work package took place at Air Plains Services, located at the Wellington, Kansas, airport. I see in my logbook that I delivered the airplane on August 27, 2010. In just nine weeks, Air Plains performed one of its most popular upgrades—swapping the 182’s stock, 230-horsepower Continental O-470 engine for a 300-horsepower, factory remanufactured Continental IO-550-D. The work didn’t end there. A new Hartzell three-blade propeller was installed, as well as Flint Aero’s 24-gallon tip tanks (12 gallons per side). A number of generous contributors—as always—kicked in with vital accessories that made the Air Plains stop much more than a simple engine swap. Plane Power contributed one of its new alternators, Airforms came through with engine baffling, and RAM LLC chipped in mightily with a new exhaust system. And those are just a few of the contributors. (For a full listing of all the contributors to the project, see “ The Best of the Best.”)

Now we had an airplane with 70 more horsepower and up to two hours’ more endurance. On November 6, 2010, Senior Photographer Mike Fizer and I flew from Wellington bound for the AOPA Summit in Long Beach—and dying to see how the rejuvenated airplane performed.

Answer: like a champ. At 6,000 feet, the airplane cruised at 162 KTAS; up at 10,000 feet, we did 148 KTAS. This was not your father’s old 182: It was a Skylane that behaved more like a Bonanza A36. Fuel burns were high in the first few hours of the engine’s life, as break-in procedures call for maximum power to help properly seat the piston rings. So yes, that 162 knots came at a price of 18 gph. But later flights at leaner power settings yielded fuel flows as low as 12 gph—as long as you flew at lean-of-peak-EGT mixture settings and were willing to sacrifice a few knots. And climb performance? Fully loaded, the airplane took off from the Albuquerque International Sunport (elevation 5,355 feet msl) on an 85-degree-Fahrenheit day and climbed away at a very healthy 1,700 fpm. 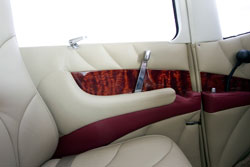 After its debut at AOPA Summit, it was off to Advantage Avionics, located at the Chino, California, airport. There, Mark Krueger and his crew yanked out the disco-era Cessna avionics and replaced them with a redesigned instrument panel that had it all. Thanks to Garmin International, that company’s G500 primary flight display/multifunction display was installed; this is the state of the art in light-general-aviation retrofit avionics. Also included in Advantage’s installations were Garmin’s GTS 800 traffic advisory system; datalink weather from XM WX, via Garmin’s GDL-69A datalink receiver; L-3 Communications’ Trilogy electronic standby instrument (which incorporates airspeed, heading, attitude and altitude information—all in one in package); Cobham/S-Tec’s System Fifty-Five X autopilot; JP Instruments’ excellent EDM-930 engine data monitor; PS Engineering’s best-selling PMA8000BT audio panel (with Bluetooth capability); and much more.

My next “shuttle flight” was on February 2, 2011, when I flew the Crossover Classic to Air Mod, an excellent interior shop (and one we’ve used for previous sweepstakes projects) based at Batavia, Ohio’s Clermont County Airport. There, Dennis Wolter and his team worked their magic with seats, side panels, and overall interior redesign that make this airplane’s the best Skylane interior ever. Part of that process involved a thorough cleaning and chromating of the interior, as well as spot treatment of some small areas of light corrosion. Air Mod also installed Knots2U’s wheel pants, LP Aero Plastics’ new windshield and side windows, Vantage Plane Plastics’ new interior plastic components, Avion Research’s new control yokes, and Flight Boss’s center console—which contains an armrest, of course, but also a clipboard, cupholders, a trash receptacle—and, last but certainly not least—a Mountain High oxygen system.

It all made for a luxurious ride from Batavia back to AOPA’s home base at the Frederick, Maryland, Municipal Airport—where I shot my first instrument approach behind the new panel. Then it was off to Sun ’n Fun with AOPA Live Executive Producer Warren Morningstar. Comfortable, fast, and with most of its squawks addressed—especially bothersome was an out-of-rig condition that made the airplane radically right-wing-heavy—we landed in style and the airplane was put on display at the AOPA’s big white tent. Luckily, the Crossover Classic survived the tornado that hit the Sun ’n Fun grounds during the event. Good thing, or we might not have an airplane to give away this year!

Sun ’n Fun brought admiring gazes, but there was no avoiding the issue of the paint job. In plain language, the original paint looked bad. Real bad. In the early 1970s Cessna used lacquer-based paints. They may have looked good back then, but after 40 years the lacquer on our/your airplane literally dried up, cracked like the desert floor, and just flat-out flaked off with the swipe of a hand. Visitors to the airplane at Sun ’n Fun were polite, but there was thinly veiled criticism. “I like those original paint schemes,” one was heard to say, followed by a quick, “so it goes to the paint shop next, right?”

And yes, the next stop was indeed the paint shop: Boss Aircraft Refinishers, based at Salisbury, North Carolina’s, Rowan County Airport. Boss applied the paint scheme designed by Craig Barnett of Scheme Designers (who we’ve also used on previous sweepstakes airplanes), using masks provided by Moody Aerographics and a new, quick-drying polyurethane paint from Sherwin-Williams. Like the paint scheme? You ought to, because it was chosen by your votes on AOPA Online.

If you haven’t had a chance to see the airplane in person, you still can do so by visiting AOPA’s tent at EAA AirVenture (in Oshkosh, Wisconsin, July 25 through 31) and at AOPA Summit (in Hartford, Connecticut, September 22 through 24), where the Crossover Classic will be given away. 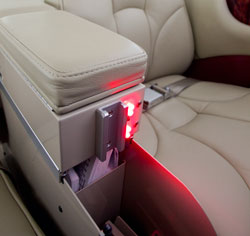 What can you expect should you fly away in your new sweepstakes Skylane? Extra speed and range, that’s for sure. Full-time traffic information, too. Elevator-like initial climb rates are part of the deal, too, as is the situational awareness that comes from the G500 displays, complete with synthetic vision and the XM WX Aviator Pro service package.

Mission flexibility is another advantage. You can fill up with 98 gallons of avgas, climb at 1,000 fpm to the mid-teens, use the Mountain High oxygen, go to a lean-of-peak mixture, and fly some 900 nm—as long as you observe weight limits. Full-fuel payload is just under 300 pounds so, as it is with business jets, there will be a tradeoff between passengers and fuel. Even so, if the tip tanks are left empty, you still have the option of using all or some of the Skylane’s 74-gallon long-range fuel capacity to make a suitable payload/range combination. While flying those long legs, enjoy entertainment managed by the PS Engineering audio system.

The only other caveats to bear in mind are a nose-heaviness (typical of all Skylanes, but especially so in this airplane, with its heavier engine) that calls for extra nose-up trim when landing, and…the need to manage your speed when flying instrument approaches or traffic patterns! Yes, it’s a Skylane, but it’s a fast Skylane with a lot of power. Don’t be surprised if ATC asks you to slow down. But isn’t that what the airplane’s all about?

The ability to fly fast or slow, fly high or low, fly short trips and long, and yet take off and land on short strips like a Skyhawk. After all, this kind of versatility is the reason we called it the Crossover Classic. And very soon, it could be yours.

Email the author at [email protected]. Photography by Chris Rose.

The Best of the best

Contributors to the 2011 sweepstakes