Get the app Get the app
Already a member? Please login below for an enhanced experience. Not a member? Join today
News & Media Brits invade Florida

An international flavor rounds out the Piper Altaire

Piper’s first jet project, the Altaire, leverages the 84-year-old company’s knowledge in building airplanes and blends it with input from a group of project executives who have roots in another legendary aircraft manufacturer, Britain’s Hawker Siddeley. Hawker Siddeley was an amalgamation of British manufacturers.

Piper’s first jet project, the Altaire, leverages the 84-year-old company’s knowledge in building airplanes and blends it with input from a group of project executives who have roots in another legendary aircraft manufacturer, Britain’s Hawker Siddeley. Hawker Siddeley was an amalgamation of British manufacturers. The Hawker business jet product line, under British Aerospace ownership, was sold to Raytheon Aircraft, which owned Beechcraft. The two companies were sold to an investment group, which named the combined companies Hawker Beechcraft. 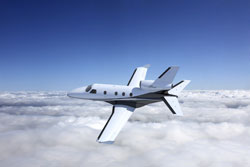 Longtime Beechcraft executive Randy Groom last year joined Piper Aircraft as executive vice president. Since then a group of former Hawker Siddeley executives who had migrated to Raytheon and Hawker Beechcraft have made the move from Wichita and Little Rock, Arkansas, to Piper’s headquarters in Vero Beach, Florida, to push the Altaire single-engine jet program forward.

The “British invasion,” as the Vero Beach staff calls it, includes executives with wide-ranging expertise in building business jets—a skill lacking at Piper, which had never built a jet before and hadn’t developed a new product since the Meridian turboprop in 2000. The Meridian is a derivative of the Piper Mirage, while the Altaire is an all-new design.

Keeping with Piper tradition, the Altaire is an all-metal airplane, but unlike many earlier Piper products, this one uses an all-bonded-metal wing instead of riveted wing skins. To accomplish that change and numerous others in support of the Altaire project, Simon Caldecott, vice president of operations and a former Hawker Siddeley executive, has gone on a buying spree, sourcing a variety of new high-tech tools that, he says, will ultimately improve efficiencies throughout the Piper production process.

Piper’s new owner, Imprimis, sees the Altaire as a new start for the legendary company, according to Caldecott. The investment in new tooling for Altaire will mean faster production and better-quality parts for the legacy Piper models as well.

Among the new machines is a $500,000 system that forms manufacturing tools directly from the computer-aided design files. The Altaire is the first aircraft Piper has built completely in CAD. All documents and reports are stored and sent to the FAA electronically.

Sitting in a glass-enclosed room, the computerized milling machine buzzes and whirrs for a few hours, churning out a new ABS plastic tool over which aluminum parts can be formed. If a change to the tool is desired, only a few hours of the tool’s time is required—as opposed to potentially weeks if the tool manufacturing is done by an outside firm.

While Piper has traditionally been a highly vertically integrated company, major subsections of the Altaire will be built by outside companies, including the landing gear and interior.

Among the challenges with the interior are seats that meet high G-load requirements, because the Altaire will not meet the traditional 61-knot stall speed required for single-engine airplanes. The FAA permits exceptions to the 61-knot requirement if a manufacturer can show that the airplane design provides an equivalent level of safety. While landing weights for the Altaire are not yet finalized, engineers know that it will likely stall at something close to 70 knots. Therefore, to create an equivalent level of safety, the seats must withstand up to 26 Gs forward and 32 Gs downward. That level of safety must be balanced against comfort, weight, cost, and manufacturability, reminded Ian Atkinson, a former British Aerospace executive who is the customer representative for jet engineering. The complex seats are expected to be certified in the third quarter of 2011, he said. 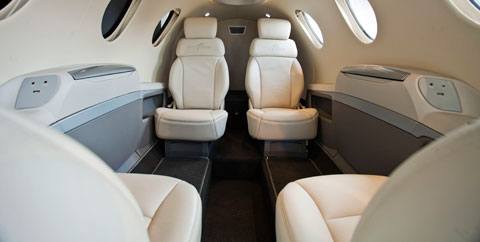 Atkinson and Simon Atwill, also formerly of BAe, bring experience in manufacturing a larger airplane to Piper, including the perspectives of professional pilots and higher-end customers than Piper has dealt with before. With input from a committee of Piper dealers, the team obsesses over every detail about the interior—the correct table height, placement and size of cup holders, the maintainability of interior materials, and placement of switches. One of the biggest issues in a modern aircraft interior is access to electrical power and connectivity. “Everybody wants their device,” said Atkinson. “So give them power rather than equipping the aircraft with technology that will get outdated.” As a result, electrical power will be readily available throughout the cabin. Rather than an extensive and heavy built-in entertainment system, passengers will most likely view and listen to entertainment through their personal portable devices.

Altaire pilots will fly behind the Garmin G3000 cockpit, which includes a touch-screen flight management system.

Wind-tunnel testing of the Altaire began in early 2011 for design of what will be five development aircraft—four for flight test and one for static testing; the first is expected to fly in 2012. The Altaire fuselage design emerged from the PiperJet concept announced by Piper in 2006. After testing and additional market surveys, Piper announced in 2010 that the fuselage would be significantly enlarged and made rounder; the proof of concept aircraft used a fuselage from the Piper PA–46 product line that makes up the Meridian single-engine turboprop and Mirage and Matrix piston airplanes.

The six-seat airplane with an optional seventh seat is expected to cruise as fast as 360 knots at altitudes up to 35,000 feet. Range will be as far as 1,300 nautical miles or about 1,200 nm with 800 pounds of useful load and full fuel. Power comes from a single tail-mounted Williams International FJ44-3AP engine generating 2,500 pounds of thrust. Because of the engine’s high thrust line, the Altaire incorporates a vectored thrust nozzle developed by Williams called an EXACT nozzle (exhaust angle control technology). The EXACT nozzle is expected to minimize or eliminate the changing pitching moments that would be expected with thrust adjustments from an engine mounted high on the tail.

Groom says that Piper has more than 100 orders for the Altaire, which is expected to sell for about $2.5 million when certification is achieved and first deliveries begin in 2014.

The Altaire represents a new beginning for Piper. “It puts us in a different category,” Caldecott says, completing Piper’s product line that runs from light trainers through turboprops and, now, a jet.

The Altaire fuselage and cockpit mockup is on tour throughout the year. See the Piper website for tour stops. 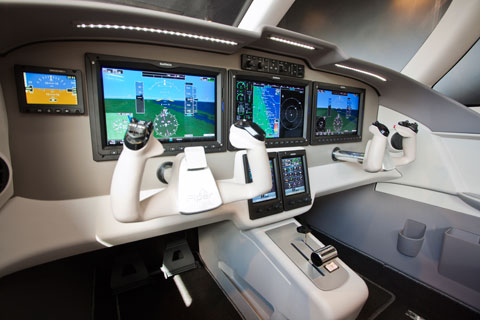 Email the author at [email protected]. Photography by Chris Rose.