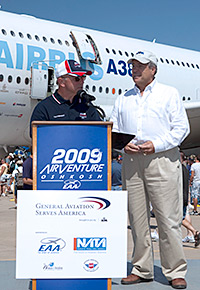 Poberezny, 64, became president of the association in 1989, when he assumed the role after his father and the organization’s founder, Paul, retired from day-to-day involvement; he has served as chairman since 2009. The announcement came a year to the day after EAA announced that Poberezny was handing over the reins as CEO and president of the association to business manager and Stearman pilot and rebuilder Rod Hightower; Poberezny remained chairman of the organization and its annual EAA AirVenture. With Poberezny’s retirement, Hightower will assume his responsibilities while the board determines how to fill the position.

“Tom, like his father, has been a visible leader for EAA and a mentor to thousands of flight enthusiasts, especially the countless young people that he has helped understand and become involved in the wonder of flight and the importance of aviation to our society,” Louie Andrew, vice president of the EAA board and chairman of its executive committee, said in a press release. “We will miss his daily involvement and valuable input, but we are happy to know that he will continue to be a good friend and an informal adviser as we move into an exciting future.”

The association made the announcement at a surprise press conference by the brown arch on the EAA AirVenture grounds in Oshkosh, Wis. While Poberezny will assume the role of chairman emeritus, Aug. 1 will mark the first time in the association’s 58-year history that a Poberezny has not been in a top position.

“The building blocks for the continued success and growth for EAA have been laid, and I look forward to helping in new and different ways in the years ahead,” Poberezny said.

“On behalf of AOPA’s more than 400,000 members, I want to thank Tom and commend him for the work he—like his father before him—has done during five decades at EAA to build it into the incredible organization it is today,” said AOPA President Craig Fuller. “I personally want to wish Tom and his wife, Sharon, well, and I look forward to working with Rod Hightower and the rest of EAA’s great staff to strengthen the ties between our two organizations as we work collectively to protect our freedom to fly.” 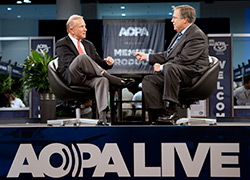 EAA spokesman Dick Knapinski said that the younger Poberezny’s legacy with the organization includes the success of the Young Eagles program, the creation of the light sport category, and the expansion of EAA AirVenture.

“He has taken this event from a fly-in to one of the world’s greatest aviation gatherings,” Knapinski told AOPA after the press conference. Poberezny has been chairman of the event for more than 30 years.