Get the app Get the app
AOPA Members DO more LEARN more SAVE more - Get MORE out of being a pilot - CLICK HERE
News & Media LightSquared blames &lsquo;legacy&rsquo; GPS for interference

LightSquared, the company whose proposed mobile network has raised widespread concerns about interference with GPS signals relied on by aviation and other users, has responded to its critics with a report that said GPS receivers must do a better job of “rejecting” other signals.

In the report, submitted to the Federal Communications Commission after five months of analysis by a working group convened to study the problem, LightSquared acknowledged that its planned use of electromagnetic spectrum would “adversely affect a significant number” of “legacy GPS receivers.”

However, LightSquared disowned responsibility for the interference, arguing that the receivers’ designs were the cause of the problem.

“The reason for this is not because LightSquared would be improperly transmitting in the GPS band. Rather it is because legacy GPS receivers do not adequately reject transmissions from base stations operating in the adjacent frequency band because the GPS receivers have been deliberately or, sometimes, inadvertently, designed or manufactured with the assumption that there would be no adjacent-band terrestrial transmissions—ignoring regulations first adopted in 2003 that permit such transmissions,” it said in the report.

AOPA and many other industry groups continue to speak out against the proposal.

“While LightSquared clearly wants to protect its own investment, the company seems perfectly willing to put at risk billions of taxpayer dollars already spent by the federal government to develop the GPS-based Next Generation Air Transportation System (NextGen),” AOPA President Craig Fuller said. “That LightSquared is trying to blame it all on the GPS community for following rules that LightSquared is now trying to change is unfathomable. They are clutching at straws.”

LightSquared said results achieved by the FCC-ordered working group that studied GPS interference from its ground stations demonstrated that operating its network in the bands farthest away from GPS frequencies would have “no adverse effect” on 99 percent of receivers. That result left policymakers facing several choices, “none of which is ideal.”

LightSquared proposed delaying incorporating its network into the upper 10 megahertz of its frequencies while working with other stakeholders to “explore all options” for using its full complement of frequencies at appropriate power levels later.

“This solution already has cost LightSquared over a hundred million dollars to shift the timing of its access to portions of the frequency bands it shares with Inmarsat that serve as a critical component of the LightSquared network,” the company said. “It will cost LightSquared even more in disruption to its operations and uncertainty regarding the timing and composition of its full complement of terrestrial frequencies operating at appropriate power levels. LightSquared is willing to bear that expense and disruption in order to move forward with its network.” 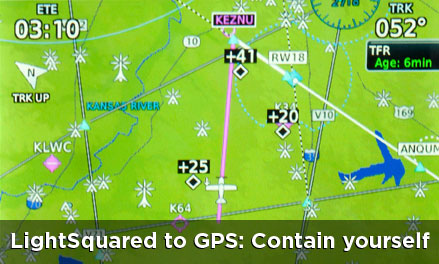 LightSquared described its proposed solution as a middle ground between government rejecting the “bailout” of the commercial GPS device industry in favor of a market-based technical solution, and the other extreme—a course that would “doom an innovative American start-up company.”

LightSquared attacked what it described as “a massive, vitriolic public relations and lobbying effort outside the scope of this proceeding.”

“Despite this campaign of distortion and obfuscation, the record clearly establishes that the commercial GPS device industry must accept the fundamental responsibility of using the radio spectrum efficiently and not undermining the value of adjacent frequency bands,” its report said.

Release of the report followed one day after AOPA President Craig Fuller’s appearance with Rep. Charles Bass (R-N.H.) at a Concord, N.H., news conference calling on the FCC to fully vet test results that raise concerns about effects of the network plan on GPS. Fuller said the report offered no real solutions.

“While AOPA’s team continues to pore over details, our initial review finds nothing in the working group report submitted to the Federal Communications Commission today that leads us to believe LightSquared is any closer to engineering a system that protects GPS,” Fuller said. “We continue to call on the FCC to rescind its waiver for the LightSquared proposal. The Commissioners cannot rely on statements in news releases. They must utilize experienced third parties and carefully conducted tests to determine what works and what put our nation's GPS system at risk.

“At the same time, we renew our call to Congress to investigate how we got into this mess.

“It’s time for the chairman of the FCC to call home and get new instructions,” Fuller said, citing numerous government recommendations given in recent congressional testimony to halt the LightSquared network until it is more fully tested.