Get the app Get the app
Get the latest news on coronavirus impacts on general aviation, including what AOPA is doing to protect GA, event cancellations, advice for pilots to protect themselves, and more. Read More
Already a member? Please login below for an enhanced experience. Not a member? Join today
News & Videos Show-stealing airliner still wows crowds in Reno 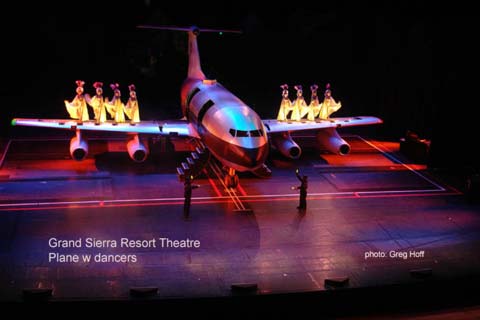 It has had cameos with stars, borne a dozen dancing showgirls, and disappeared on a nightly basis—all for the benefit of millions of tourists. With an 80-foot wingspan, the five-engine T-tail jet on stage at the Grand Sierra Resort has commanded the attention of audiences in Reno, Nev., for nearly 33 years.

The airliner, constructed of a steel framework and sheet aluminum, was built in pieces in Las Vegas and shipped to the Grand Theatre in Reno for the opening of the extravagant ensemble show "Hello Hollywood Hello" in 1978, shortly after the casino opened as the MGM Grand. The show ran for 11 years, and even afterward the impressive stage prop remained to star in a variety of performances—most recently the kickoff of the International Women in Aviation conference.

“As soon as that airplane is seen there’s a loud round of applause,” said entertainment director Chris Christiansen. He said that in addition to its role in “Hello Hollywood Hello,” the aircraft was the mainstay of a magic show and still appears 20 or 30 times a year.

Close to 7 million people saw “Hello Hollywood Hello,” a production from choreographer and director Donn Arden, during its 11-year run. The cast of more than 100—including, at different points, Carol Channing and Suzanne Somers—shared the enormous stage with the airliner, space ships, three-story-high waterfalls, and more; and one memorable scene recreated the San Francisco earthquake, complete with pyrotechnics and collapsing scenery. The jet made its entrance by “taxiing” about 200 feet from the rear of the stage, which spans about an acre.

The jet took center stage in a show by magicians Mark Kalin and Jinger Leigh, who made airliner disappear nightly.

The aircraft was pieced together as the casino-hotel itself was being prepared for the grand opening, said Grand Theatre Lighting Director and Production Manager Greg Hoff. The fuselage, wings, and tail section arrived when the theater still had no seats.

The jet was painted as a Western Airlines aircraft then, Hoff said, but it has been painted with the colors of a number of other airlines since. A winch motor lifts the wings when the aircraft is stored, he said, and electric motors drive the rear wheels when it taxis. He said the size of the stage, and the fact that the airplane’s wings fold to save space, may be partially responsible for the aircraft’s long run at the resort.

The extravagant “Hello Hollywood Hello” was hard to top for the airliner, but it did not go into quiet retirement after the show ended. In the early 2000s, it took center stage again for a grandiose illusion: Magicians Mark Kalin and Jinger Leigh featured the jet, painted as an American Airlines airplane, in their nightly show for more than two years.