Get the app Get the app
AOPA will be closed on Friday, July 3, 2020, in observance of Independence Day.
Already a member? Please login below for an enhanced experience. Not a member? Join today
News & Videos Sikorsky X2 team wins Collier Trophy 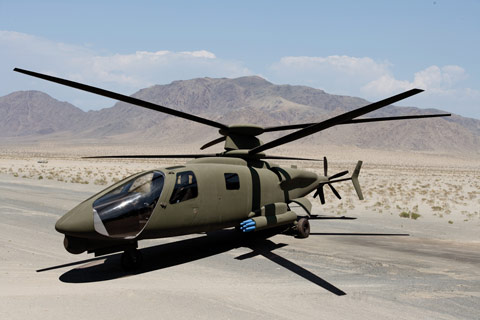 The prestigious award, announced at the NAA Spring Awards Luncheon, is presented annually “to recognize the greatest achievements in aeronautics or astronautics in America with respect to improving the performance, efficiency, or safety of air or space vehicles, the value of which has been thoroughly demonstrated by actual use during the preceding year.” The announcement marked the 100th Collier Trophy to be awarded since the inception of the prize.

“The recognition comes six months after the X2 Technology demonstrator successfully achieved a speed of 250 knots true airspeed in level flight, setting an unofficial speed record for a helicopter and accomplishing the program’s ultimate speed milestone,” the Connecticut-based company announced in a news release.

The aircraft was designed under a program that began in 2005 “to demonstrate a helicopter can cruise comfortably at 250 knots while retaining such desirable attributes as excellent low speed handling, efficient hovering, and a seamless and simple transition to high speed.”

Sikorsky President Jeffrey P. Pino added that the company “has a long and storied history of innovation, starting with the invention of the world’s first practical helicopter and continuing today with X2 Technology and the exciting new possibilities it opens for our company and our industry.”

Formal presentation of the award will take place at the NAA’s 100th Anniversary Collier Dinner, on May 5.