A tangled web we weave

SimCom’s Pilatus PC12 Level 1 flight training device provides pilots with a near-real-world view out the cockpit. Though the device doesn’t move, the psychosomatic feedback of the wrap-around visuals gives a convincing sense of movement. 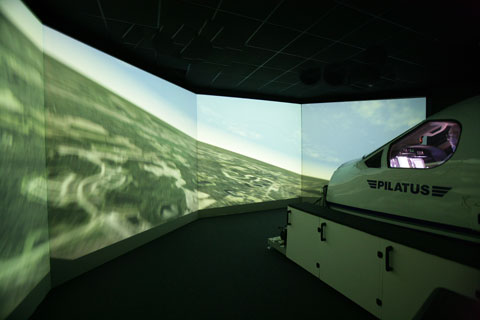 SimCom’s Pilatus PC12 Level 1 flight training device provides pilots with a near-real-world view out the cockpit. Though the device doesn’t move, the psychosomatic feedback of the wrap-around visuals gives a convincing sense of movement.

Simulators are classified by what the industry and the government agree is a confusing system—a trail of good intentions followed by the FAA that left behind an indecipherable classification system. What you probably want to know is how to save money by substituting training equipment for a real airplane. The answer is, “It depends,” as you’ll see.

First, if the simulator has a number, it doesn’t move. If it has a letter, it moves and costs a lot of money. The higher the number, or the lower in the alphabet the letter, the more sophisticated the device. For example a Level D simulator outranks a Level A.

The flight training devices (FTDs)—the ones that don’t move—are classified Level 1 through Level 7, with 7 being the most sophisticated. Only devices that move can use the word simulator, if you want to be technically correct. Simulators are classified as Level A through Level D.

New Level 1 FTDs do not really exist, although old ones are still in use, and no one can define this level. That sounds nuts, but the FAA’s senior advisor for flight training and simulation Ed Cook confirms it is so. What goes into Level 1? All the FTDs that don’t seem to fit into any other levels—devices stuck in a netherworld, like ghosts. Devices previously approved as Levels 1 to 3 have “grandfathered” rights to continue in operation.

Level 2 doesn’t exist, either (except for the previously approved ones), but was once the holding pen for personal computer-based aviation training devices (notice how I avoid the word “simulator”), or PCATDs. They don’t exist by that name anymore.

The FTD classification system is getting simpler to understand, now that you know three of the FTD levels are no longer in production. Level 7 refers to helicopter devices. Simple enough. That leaves levels 4, 5, and 6 for fixed-wing FTDs. To understand them, I called Frasca International sales representative Victor Veltze. Frasca makes FTDs (that don’t move), simulators (that move), and AATDs.

Level 4 is part-task trainer, Veltze said. When you get in it, you can expect to see touch-screens that help you learn procedures for instruments or flight management systems. There will be no control yoke.

Level 5 has represents a “class” of aircraft (meaning single-engine, multiengine, et cetera), and also requires a document called a qualification and approval guide that contains FTD design criteria. At this level, the device is starting to look more like the aircraft you are going to fly. There’s a yoke, for example.

Level 6 has to be accurate for the aircraft you fly, right down to spatial relations and actual functions. Like all flight training devices and simulators, it must also have a qualification and approval guide, but makes use of expensive aerodynamic data. It flies with more realism.

“You can take most of an instrument proficiency check [but can’t meet the requirement for a landing] in an AATD,” Gregoire said. The AATD is more sophisticated than a BATD, but neither can be used for circle-to-land maneuvers, a circling approach, or unusual attitudes. Neither was intended for training in visual conditions. In an AATD, you can log instrument flight experience for currency, 20 hours toward an instrument rating, up to 50 hours toward a commercial rating, 25 hours for your ATP rating, and 2.5 hours for your private pilot certificate. Just to stir the pot a little, an AATD will often have the same maximum training credits (above) as a Level 6 FTD.

BATDs allow you to log instrument flight experience such as approaches, but you get only 10 hours toward an instrument rating, even if you are in a Part 141 school. You still get 2.5 hours toward the private pilot certificate, called an “introduction to the operation of flight instruments.” There’s no credit toward an ATP certificate.

Remember how I mentioned that only simulators move? That’s not always true. The Redbird AATD moves, but the hassle of getting the motion certified—not to mention the cost—didn’t make good business sense. Therefore, you get motion, but not the credits that a full flight simulator usually offers (in a full flight simulator, response time of motion, instruments, and visual displays are objectively qualified). AATDs and BATDs are subjectively qualified, meaning the FAA takes a look and either approves or disapproves the device. Unlike FAA checks of flight training devices and simulators, the engineering reference data is not required to be confirmed.

Remember how three of the seven FTD levels do not exist? Well, here we go again with simulators. Level A barely exists. Cook estimates that there are only a dozen or so in the nation. They have less sophisticated visual systems and little data for simulating ground effect. (Yes, we can start to use the “s” word.) Some of the aircraft still using Level A simulators include the Lockheed JetStar, one of the first business jets—if not the first.

Level B barely exists. Cook says there are maybe 12 to 15 in the United States, but Frasca International has delivered one. “Level B would give you 80 percent of initial training for a type rating, and 100 percent of recurrency training if you have circle-to-land privileges like we did on our Caravan simulator for the University of Alaska,” said Frasca’s Veltze. Frasca called it a Level B Plus. It has circle-to-land capability that “Kinda makes it a C,” Veltze said. But it’s not.

Cook thinks there are about 230 Level C simulators in the country. There are tighter tolerances on data. The scenery is better. All instrument currency requirements, including a landing and circle-to-land, can be met in the simulator. More pilots are using these simulators. Bottom line, though, is that the differences between Level C and Level B are subtle. 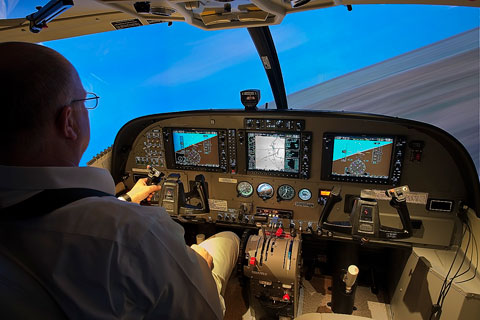 Simcom's strength is its huge visual presentation. Although the experience is realistic, landings or flight reviews cannot be logged in flight training devices—even sophisticated ones.

Finally, we arrive at Level D. Behold that you can do everything in it, including full type ratings for sophisticated airliners. Cook says there are between 400 and 430 in the country. Daylight scenery is a requirement. (Some AATDs have daylight scenery, too.) They have better data and tighter performance tolerances.

Tom Evans, training center manager at Simcom’s Lee Vista facility in Orlando, was asked which of the devices and simulators can be used for instrument proficiency checks (IPCs) and flight reviews. Only Level C and D simulators can be used for a full IPC, start to finish, Evans said. That’s because of an FAA requirement for a landing as part of the IPC (a recent change made by the FAA), and only those two levels are considered realistic enough to give credit for a landing. Other devices and simulators give credit for flight experience, and that includes the approaches, holding, and the navigation portion of the IPC. But you’ll not get credit for a landing unless you’re in a Level C or Level D simulator—or, of course, the real airplane.

“Flight-review regulations do not specifically say a landing is required,” said Evans. So in a Part 142 course, and 142 refers to a training center’s regulation, you can do a flight review (if the pilot already is current for landing) in a Level 5 FTD or higher, assuming that the device is approved by the local FAA. Remember, Level 5 devices just imitate a class of airplane, not a specific model.

Under FAR 61.56 (certification of pilots, flight instructors, and ground instructors), participation in the FAA’s Wings Pilot Proficiency Program is another way to satisfy the flight review requirement. Every course that SimCom offers in conjunction with a specific training device or simulator is recognized and approved for Wings credit. That, in turn, gives you credit for a flight review.

The current system has caused confusion. Some companies put actual Garmin G1000 avionics in FTDs while others only simulate a glass cockpit. Both are legal.

The International Civil Aviation Organization (ICAO) found that there are more than 30 classifications of FTDs and simulators around the world. An international working group comprising manufacturers, operators, and regulators has worked for many years to set a global standard. Cook is suggesting to the FAA that the United States adopt an international standard developed by ICAO that boils all definitions into seven numerical levels.

There’s newer technology coming to simulators—voice recognition, referred to as interactive air traffic control. That means the pilot will call for weather (or taxi, takeoff, or another clearance), and a computer-generated voice will correctly answer. What kind of simulator will that be when the international standard is adopted? An ICAO 9625 Level 7, of course.

Sounds sophisticated, but Redbird, the company that supposedly makes lower-end simulators, already has it. It is marketed under the name Parrot.