Get the app Get the app
Already a member? Please login below for an enhanced experience. Not a member? Join today
News & Media 200 feet, lights in sight

Why you may not see the runway

"Approach lights in sight, continue" is a callout heard during every two-pilot jet simulator session, yet generally unfamiliar to pilots transitioning from piston aircraft. Why? The reliability and capability of jet aircraft are so great that they are often flown into weather conditions a pilot wouldn't take a piston aircraft. Very low visibility conditions are one such example. 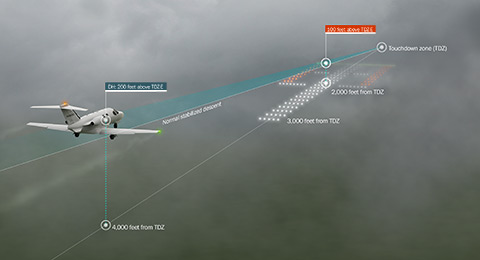 “Approach lights in sight, continue” is a callout heard during every two-pilot jet simulator session, yet generally unfamiliar to pilots transitioning from piston aircraft. Why? The reliability and capability of jet aircraft are so great that they are often flown into weather conditions a pilot wouldn’t take a piston aircraft. Very low visibility conditions are one such example.

The lowest ceiling and visibility authorized for a Category I ILS (the only category most GA aircraft are capable of flying) are a 200-foot decision height (DH) and a 1,800-foot runway visual range (RVR), or roughly one-quarter-mile visibility. Given that a 3-degree glideslope descends approximately 300 feet per nm of forward travel, an aircraft at a 200-foot DH will be two-thirds of a nm, or about 4,000 feet, from the point where the glideslope intersects the runway. As glideslopes are set to lead to a touchdown zone 1,000 feet down the runway, this puts the aircraft 3,000
feet from the runway threshold.

You may have the needles centered at an ILS decision height, but given the dynamics of a 3-degree descent, you may not see the runway touchdown zone. That’s where FAR 91.175 kicks in. With the approach lights in sight, you can legally continue the approach, using the lights for guidance to the runway.

Since the legal visibility may be as low as 1,800 feet it is possible for the pilot to be in a situation where the runway 3,000 feet away may not be visible at DH. Depending on the type of approach lights, they extend from 1,400 feet to 3,000 feet from the threshold of the runway—they extend far enough towards an aircraft at DH that they will be the only lights in view on a minimums approach.

FAR 91.175 states that an aircraft may continue an approach below DH without the runway in sight, if the aircraft has the approach lights in sight “…except that the pilot may not descend below 100 feet above the touchdown zone elevation using the approach lights as a reference unless the red terminating bars or the red side row bars are also distinctly visible and identifiable.”

The red lights do not exist at most smaller airports, so effectively the pilot must have the runway in sight at 100 feet to continue. At 100 feet above touchdown zone elevation (TDZE), the aircraft is now one-third of a nm, or 2,000 feet, from touchdown point, and thus 1,000 feet from the runway threshold. Even with lowest case 1800 RVR, the pilot should have no trouble acquiring the runway with this geometry. If a runway has no approach lights, or if the approach lights are out of service, the minimum landing visibility jumps to 4,000 RVR, as without lights the runway itself must be visible at DH.

Knowing what can be expected visually at minimums is an important part of the approach briefing for a very low IFR approach. Most of the time, if an airport is reporting less than 3,000 RVR, the pilot should be anticipating a transition from 200 feet to 100 feet referencing the approach lights alone. This means controlling the airplane mainly by reference to instruments, with very quick peeks out the window. Understandably this can make for a busy 100 feet of descent, even more so for a single-pilot operation; anticipating the workload can help reduce the stress of a difficult transition.