Get the app Get the app
Already a member? Please login below for an enhanced experience. Not a member? Join today
News & Media Honk if you like airports

Few sights in nature thrill the soul like a V formation of Canada geese winging overhead, their chorus of voices a harbinger of winter or the first proof of spring.

But if those geese overfly a lusciously fertilized expanse of grass, or a crop growing on leased land around a country airport, they may land for lunch. Perhaps they'll become permanent residents. Then what started out as a vision of nature's majesty becomes a peril for pilots flying in the vicinity.

Many measures, some humane and others, not so much, have been tried to drive Canada geese and other large birds away from airports, with spotty success. Canada geese rank second behind gulls and ahead of hawks as a bird-strike risk for aircraft—and they don't scare easily. Loud, explosive noises drive them off temporarily, but they return. Fake-coyote decoys and the like fail once the geese figure out that they are just scary statues. Canada goose populations in the U.S. have grown from thousands in the 1960s to an FAA-estimated 5.3 million in 2009.

AOPA member Philip C. Whitford, a biologist, professor, and 1,200-hour pilot, has been on a decades-long wild goose chase that is producing promising results in clearing out unwelcome goose populations. 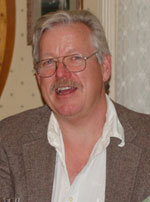 Philip C. Whitford has been on a decades-long wild goose chase to clear out unwelcome goose populations.

Whitford, a professor at Capital University in Columbus, Ohio, grew up in Wisconsin. He was always enthralled by the vast flights of Canada geese during seasonal migrations. In the 1970s, looking for a dissertation subject, he hatched a theory: If you could warn Canada geese of danger with enough emphasis, they would depart and not return.

“Almost nothing was working for scaring them away,” he said in an interview.

Day after day, he studied Canada goose behavior, certain that if he learned their language—“They just honk, how hard can it be?”—he could capture and record their alarm call.

True alarm calls were rare. More often, Canada geese gave calls expressing annoyance, or sounding alerts. Once he had the alarm call recorded, Whitford mounted speakers on his car and headed for a marsh known to contain up to 450,000 Canada geese a night, to try it out.

“It worked pretty well,” he said.

For the next few years, he worked to develop equipment that would prevent the geese from becoming “habituated” to the device—the downfall of many other ideas.

“They are very able to recognize the same voice,” he said. “We played around with it so it changed.”

Canada geese are big birds, ranging from five pounds for the smallest variety to 12 pounds or more for the giant Canada goose. They have personalities to match, and when confronted “can take care of anything up to and including coyotes.”

Canada geese “taught me a few lessons I can remember,” when Whitford pushed the boundaries too closely (as determined by the geese).

“They have a six-foot wing span, and when that wing comes forward at 45 miles an hour it leaves a memorable impression,” he said.

Curious wildlife doesn't fare better in a dust-up with an irate Canada goose. “I've seen a goose hang on and ride a deer for a hundred yards when the deer put its nose in the nest,” he recalled.

The alarm call worked, but discovering a finishing touch happened by chance. Whitford was working in Wisconsin's 33,000-acre Horicon Marsh four years ago, accompanied by a U.S. Department of Agriculture scientist. The USDA man fired off a cracker shell while the alarm call was being played.

“The results were instantaneous,” Whitford said. Soon the geese were gone.

“A banger shell and alarm call together can clear geese from up to 140 acres in quiet surroundings, 10-20 acres in noisy city environments,” Whitford explained.

The chance to market his device arrived when Whitford met the father of a student in his animal behavior course at Capital University. The father was the manager of a lawn-care company—and he had a problem.

“They were having issues with 200-300 geese in a test-growth area for their products,” Whitford said.

That contact led Whitford to the Chicago, Ill.-based pest control firm Bird-X. The company proposed marketing the device as a humane pest-control device under the name Goosebuster. The first unit sold around the year 1999. Some 200 to 300 have sold since, finding use in corporate parks, apartment complexes, and at a few small airports.

Further research in 2007 at sites such as sewage plants and farms has shown that the device drastically reduced “goose hours per week.”

Whitford, who has undergone FAA training on wildlife management around airports, explains that both the burgeoning populations of geese and their tendency to congregate near airports are problems in part caused by man.

Some airports, needing revenue, lease land to farmers for crops, but the grain attracts geese, cranes, or other wildlife to the airport.

Another typical example of a high-risk environment involving birds and aircraft is a small country airport with a pond near the runway, he said.

Whitford believes that the Canada goose population surge can be largely attributed to widespread efforts in the 1970s and 1980s to transplant them, including one variety thought extinct until a group was discovered in Minnesota. Now the transplants are “established and reproducing in 47 states.” Attracted to golf courses and parks to feed on grass, the intelligent birds “know to avoid areas outside cities where they can be hunted.”

Migratory and local birds pose different threats to aircraft. If a group overflies your house a few hundred feet high, it is probably on a short hop to a feeding area. Picture an airport with a marsh a short distance away on one side and a golf course on the other. Watch out in the traffic pattern or during a takeoff for geese flying 400 to 800 feet above ground.

Whitford said that tests showed that it was migratory birds, not locals, that were involved in the Jan. 15, 2009, bird strike involving US Airways Flight 1549. The Airbus departed LaGuardia Airport in New York City, and had climbed to 2,500 feet before striking Canada geese and gliding to a landing in the Hudson River.

Another tip from Whitford is that although migratory bird flyways are illustrated in bird-strike avoidance literature, that's a generalization. Geese navigate by large visual landmarks, such as shorelines, Whitford said. 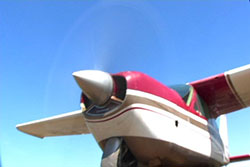 Like many pilots, Canada geese shy away from overflying large bodies of water—a sentiment Whitford has shared since the day a magneto separated from the engine of his Cessna Cardinal RG while he was crossing Lake Michigan on the way to teach a course in Ohio. The birds' preference for shoreline routes explains why places like Gary, Ind., on the southern shore of Lake Michigan, see “incredible” concentrations of geese during springtime.

Also, waterfowl are an exception to the rule that birds tend to dive to avoid aircraft. Waterfowl prefer to rise above predators, says Whitford.

None of what Whitford has learned or experienced has eroded his youthful impressions of the Canada goose's majestic place in nature, or the mystique of its calls.

“I love Canada geese,” he said. “I love to hear them, ever since I was a youngster. Every spring and fall tens of thousands of geese came overhead. There was a magic in their voices.”