Repairs on AOPA’s 2012 Sweepstakes “Tougher Than a Tornado” Husky begin on a Monday morning.

Repairs on AOPA’s 2012 Sweepstakes “Tougher Than a Tornado” Husky begin on a Monday morning. After a marathon 18-hour flight from AOPA’s home base in Frederick, Maryland, the Tornado Husky with its temporary, silver-primed control surfaces has returned to its mountain place of origin. Less than six months after it first took to the air here, the Tornado Husky is back at the Aviat Aircraft factory in Afton, Wyoming—with battle scars. 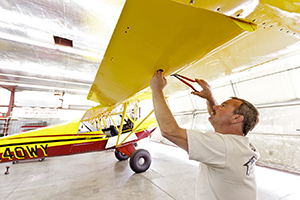 Technicians pull the familiar airplane into a maintenance hangar and evaluate the damage with a collective shrug. For the 40 skilled technicians and artisans who build up to 50 Huskies a year here, making this airplane as good as new will take less than 72 hours. And they don’t waste any time getting started.

With country music from an Idaho Falls radio station blaring and the dramatic landscape of the snow-capped mountains outside the open hangar door, Jason Matijcsyk quickly disconnects the rudder cables and elevator torque tube; removes the horizontal stabilizer, elevator, rudder, and right aileron; and takes them to the paint shop. Aviat has formulas for all its paint colors so that they can be matched perfectly. No one will be able to tell which parts were repainted after the job is done, the techs assure me.

The vinyl decal N numbers on the left side of the airplane were peeled away to get a better look at the hole the March 31 Sun ’n Fun tornado punched in the fuselage fabric. This, too, is a relatively simple fix, but the most time consuming. In order to patch the Ceconite fabric smoothly, workers must apply several layers of coatings and sand them multiple times. The gash is limited in the maroon portion of the airplane’s fuselage, meaning repainting will be relatively simple.

Stu Horn, 60, has owned Aviat Aircraft for about 15 years and takes tremendous pride in his workers’ capabilities and the results they produce.

“They can take airplanes that have been severely damaged or exposed to the harshest imaginable flight conditions for many years and return them to absolutely perfect condition such that you can’t tell them apart from factory- new airplanes,” he said. “They’re miracle workers. For them, cosmetic repairs like this are no big deal.” 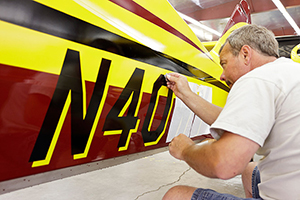 The Afton factory has produced airplanes since 1940, and it’s been continuously building piston-powered aircraft longer than any aircraft manufacturing facility in the country, according to Horn. During that time, generations of skilled workers have passed down traditions in welding, woodworking, and fabric covering—arts that have been lost elsewhere.

On a tour of the welding shop, Horn points out a pair of aluminum soda cans that someone welded together for practice, or as a test of skill. The seams around the cylinders are perfectly even and smooth to the touch.

“Thin aluminum like this is a nearly impossible material to weld, and these guys do it with unmatched precision,” he said. “Skills like these simply can’t be automated. They have to be cultivated over an extended period of time.”

It takes about 1,350 man-hours to build each Husky, and sometimes significantly more depending on customer options.

“We invest more in labor and time because we purposely don’t automate nearly as much of the process as other aircraft manufacturers,” Horn said. “It takes years of practice to become a master welder, and a master welder produces airframes that are more reliable and last longer. We have a higher standard—and it comes at a cost. 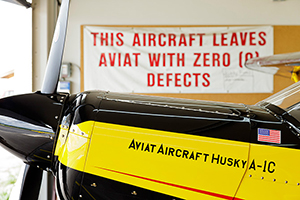 “You need a high-skill workforce and a greater amount of time to produce the best possible quality. We’ve developed some unique and proprietary processes that result in superior quality. But it all starts with the skills and commitment of the craftsmen and artisans who build these airplanes.”

Signs proclaiming Aviat’s commitment to “zero defects” are placed throughout the factory and bear workers’ signatures. The company happily notes that the Husky has absolutely no continuing FAA airworthiness directives (ADs)—an extraordinary achievement for any aircraft manufacturer and a testament to unrelenting commitment of the designers and builders.

Still, the last two years of broad economic hardships have taken a toll on Husky sales, and the company cut Husky production by about 40 percent to 30 airplanes a year in 2009 and 2010. The company also builds and reconditions Pitts aerobatic biplanes and sells Christen Eagle kits. The original factory consists of a rambling collection of buildings that total 72,000 square feet. 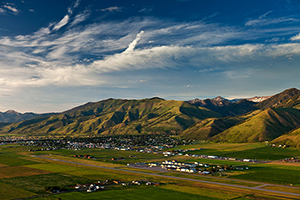 About 1,300 Huskies have been built in Afton since the design went into production in 1988, and about 1,100 are registered in the United States.

The original designers wanted to make a more powerful and highly refined version of the venerable Super Cub and sought to buy the rights from Piper. But Piper and the then-owners of the Afton factory were unable to come to terms, so they decided to design and build their own airplane in Afton. The Husky won FAA certification 18 months later and went into production almost immediately. With its bigger engine (180 horsepower compared to 150 for the Super Cub), constant-speed prop, faster cruise speed, more comfortable cabin, and IFR certification options, the Husky carved out its own place in the niche backcountry market and a devoted following among owners.

The original Husky weighed 1,190 pounds empty and 1,800 pounds at full gross weight. Since then, the Husky design has been modified with a series of improvements, and the gross weight has been increased to 2,200 pounds (and the company has applied to raise it to 2,250 pounds).

“We’re constantly improving the safety, reliability, ergonomics, and the fit and finish of our airplanes,” Horn said. “Standards from 20 years ago are no longer acceptable today.”

Horn remembers a winter flight as a Husky passenger in 1995 as horribly uncomfortable, and he vowed then to improve the experience for future Husky back-seaters.

“I was dressed in business clothes and carrying a briefcase,” he said. “It was winter, so I froze without a rear heater. When I tried to lower the rear seat to put my briefcase in the baggage compartment, I cut my finger on the seat pin. Right then, I decided to add rear-seat heat and replace those seat pins.” 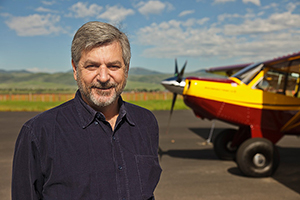 Horn listens closely to customers and Husky dealers when considering future upgrades, and the Husky has evolved a great deal from its early days.

The wing was redesigned in 2005 to improve aileron effectiveness, lighten control forces, and eliminate external spades; an option for a 200-horsepower, fuel-injected Lycoming IO-360 was offered; an aft storage area is now standard; window and door sizes have been increased; lightweight, German MT props are options (in two- and three-blade varieties) as well as the larger-diameter, 80-inch Hartzell prop; OregonAero seats; and LED lights.

“All of the changes we’ve made have come about from our own experience flying the airplanes, or customer and dealer feedback,” Horn said.

Huskies operate in some of the most extreme environments on the planet, and their construction reflects the rigors they could face during Alaskan winters, equatorial summers, and prolonged exposure to coastal salt air. The airplanes also are used extensively by government agencies, and they are workhorses for glider- and banner-tow operations, fish spotters, and pipeline patrols. They are certified to fly off floats, amphibious floats, wheels, and skis.

Research and development continues, and Aviat has a long wish list of future projects it would like to take on. But for the time being, the makers of the Husky are focusing on patiently producing the best backcountry airplanes they possibly can, one at a time.

“We have a saying here, and it starts with me and continues with every single employee,” said Horn. “We say, ‘If it’s not right, it’s not right.’ Each of us has to do everything in our power to make it right, even if that means starting from scratch and doing it all again.”

Three days after its return to Afton, the Tornado Husky’s transformation is complete. Paint on the retouched control surfaces matches exactly, along with wavy accents that conform to the original paint scheme. The hole in the left side of the fuselage has been repaired so thoroughly that it’s nearly impossible to find, even when you know where to look for it. New vinyl N numbers have been applied so that they mask the repair even more. And a new tailwheel assembly has been installed to replace the original version, which was showing early signs of wear.

Best of all from a pilot’s standpoint, the Afton experts have rigged the airplane perfectly so that it flies hands-off in cruise. There’s almost no bend whatsoever in the rudder trim tab, and the greater aerodynamic efficiency boosts the airplane’s cruise speed several knots.

Dan Kinman, the Aviat test pilot who flew the Tornado Husky when it first rolled off the factory floor, and approved the changes in the instrument panel and the addition of vortex generators, pronounces the airplane as good as new—again.

“It flies just like a Husky was meant to fly,” Kinman said. “It’s light, responsive, honest, an absolute joy. The pilot that wins this airplane is going to get an aircraft that they can be proud of and have confidence in. I’d fly it anywhere.”