Tattoos in the air

Visual evidence of a passion for flight 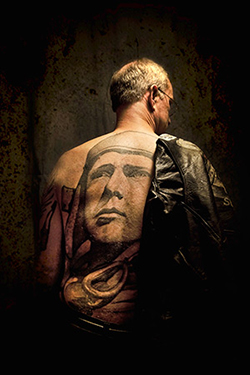 Do you have an aviation tattoo? That simple question brought 4,800 views and 180 responses on the AOPA Forum, but only a dozen or so were friendly. Many of the “fight-posts,” as angry forum comments are known, suggested I not write this article, explaining that it is unworthy. On display was a bias against tats, as tattoos are called, that was more common back in the day. Well, this is a new day, I’m writing it, and tat’s tat.

Only three responders said they had tattoos, so inventive research was necessary. That led to the discovery of an entire website for aviation tattoos called “Tattoos in Flight,” which is edited by Ryan Keough, the marketing manager for Cutter Aviation in Phoenix, Arizona. Keough was able to direct me to additional sources for the article. He never talks about his tattoos or shows them unless asked, knowing there is negative bias lurking about. Keough is an avid pilot. “To me, they are very personal expressions of my innermost passion for that which drives my eyes skyward—the passion for flight,” he said.

This article comes with a warning from the Tattoo General of the United States: “Caution, pilots. Tattoos can adversely affect airline job interviews.” I called PSA Airlines just to be sure, and was told the airline does not want its applicants to have visible tattoos. That said, I ran across a former PSA pilot in Florida who said the airline was unhappy when pilots began sporting tattoos several years back, and even less happy when their flight attendants followed suit.

Here are a few pilots with visible signs of pride in their aviation achievements.

U.S. Air Force Maj. Ben Cook sports an F–15 fighter on his back, just below the neck, where his flight suit neatly covers it. This is an email he sent from Afghanistan, where he is currently serving.

“I never thought I’d be a tattoo person,” he wrote. “There was nothing I could think of that was permanent enough in my life to display on my body forever. After working 4.5 hard years to get a pilot slot, then graduating high enough to get an F–15, making it through all my training, and finally becoming an Eagle driver, it was an easy decision. This is something that is part of who I am. Long after I’ve had my last sortie in the Eagle I will be flying GA, enjoying my family, and hopefully retired in the mountains somewhere—but I will always be an Eagle driver.”

Lindbergh has his back

Scott Lowe is an instrument-rated private pilot. He wanted to fly when he lived in New York, but didn’t act on the desire until he moved to New Jersey, where he had to drive past Lincoln Park Airport every day. That did it. He learned to fly 13 years ago. His Charles Lindbergh tattoo was inspired by a PBS show on Anne Morrow Lindbergh. He also has a 1920s Amelia tattoo for his daughter, and a Rose of the Air tattoo for his wife. He likes to fly to Allentown, Pennsylvania; Block Island State Airport, Rhode Island; Butter Valley Golf Port in Bally, Pennsylvania; and Cherry Ridge Airport in Honesdale, Pennsylvania, for breakfast and pie. He likes to remind people that flying came from more of a cowboy tradition in the 1920s, than the corporate approach of today. 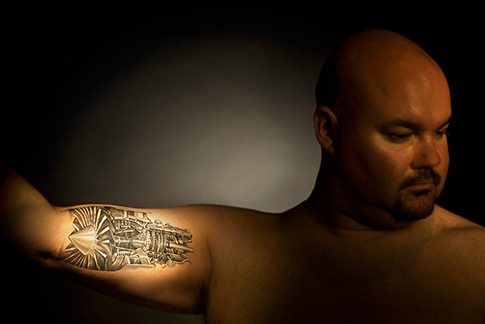 Phil Clark, 34, of San Diego got the idea to become a pilot while floating weightless one day. He was working in customer relations for Zero G in Las Vegas, the company that provides weightless rides in a Boeing 727. When new owners laid off staff, he had to choose between returning to the hotel industry or learning to fly. It wasn’t even close. He had friends at Delta Connection Academy, now known as Aerosim Flight Academy, so he rented out his Las Vegas house and headed for Florida. He got his private certificate and instrument rating. His dad worked at United Airlines, and sparked his interest in the Boeing 777. After watching a video of how the 777’s engines could take a licking and keep operating, he asked an artist for a cutaway drawing of the 777 engine. There wasn’t one available, but this Rolls- Royce engine serves to remind him of the flying career he hopes is in his future. 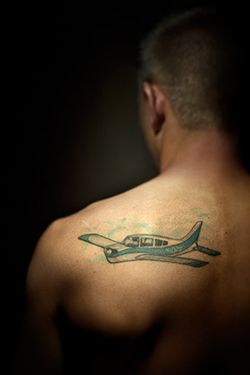 In honor of finishing his complex aircraft training in a Piper Arrow, Zach Horchar got a tattoo of the aircraft on the back of his shoulder. Horchar graduated from the Daniel Webster College flight program in Nashua, New Hampshire, in 2008. The tattoo airplane’s N number shows when he got his private certificate: December 17, 2005. “I think it is a good way to show your support for aviation, and a good way to advertise your accomplishments,” Horchar said. He added, “I wouldn’t get anything visible. Definitely don’t do the backs of the hands or wrists. You are in front of so many people, and you want to uphold a standard.” When contacted, he was at a flight school in his home town of Baltimore, getting his flight instructor certificate, and hoped to work for the flight school toward his ultimate goal of joining the airlines.

It was a long road to a private certificate for Rich Berger of Battle Creek, Michigan, and he celebrated with a Cessna 172 tattoo on his forearm once he passed the checkride. He got the bug as a youngster when his dad took him to an airshow, which may explain why he ended up working on F–14 jets in the U.S. Navy before becoming a civilian corporate jet mechanic. He joined AOPA in 2002 because he knew he wanted to learn to fly, and enjoyed Flight Training magazine. He saved the money needed for training in advance, after watching coworkers drop out of flight training because of a lack of funds. Once he started, he tried to fly twice a week, although Michigan winters made that impossible. He passed his checkride in April 2009 at age 40. “The tattoo is my fourth tattoo on my body. I got it about a month after getting my license to celebrate finally achieving my dream. I knew ever since starting flight training that my next tattoo would be something to celebrate, and show my passion for flying,” Berger said.

Matt Guerdet of Polk City, Iowa, was so particular about his tattoo that he waited three years after getting his private pilot certificate before deciding on a pair of pilot’s wings. That delay led to an interesting coincidence. He picked out a tattoo artist based on his work, and spent an hour getting the tattoo done. During the conversation, he learned his artist had become a private pilot a week earlier. “I finally decided that a pair of pilot’s wings was something I could proudly show,” Guerdet said. “I also decided that I would add the personal touch of having both of my kids’ first initials in the center shield. I go to get the tattoo and the artist doing my tattoo comes in and tells me that he just got his pilot certificate! So we chatted about flying for a little over an hour as he was creating the tattoo.”

Pat Collins had a lifelong ambition to fly and finally got his wish as a helicopter pilot and mechanic in the U.S. Army. Retiring after a broken leg, he had to stop flying and took medical training to help his newborn daughter with a medical condition. During a visit to the Veterans Administration hospital in Buffalo, New York, to have some hardware in his leg exchanged, he was offered vocational rehabilitation and chose flight training. “I received my private rating in January 2011,” Collins said. His tattoo shows a Cessna 182 pulling banners with his grandchildren’s names on them.

“I decided to become a human billboard, and promote our cause by displaying my aviation tattoo…and guess what, it’s working! I am constantly answering questions, which has led to people going up flying with me, and showing the desire to continue some type of training.”

The artist, the pilot 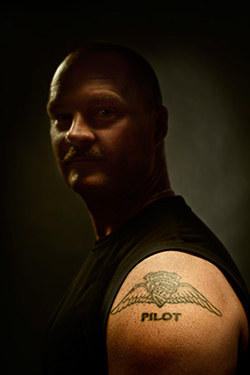 Wesley LaMore is both a tattoo artist and a pilot living in Pittsfield, Massachusetts. He owns a Vans RV–6A that helps to expand his one day per week off by saving time. In addition, his family lives in the Midwest, so he uses the airplane to make the trip. To celebrate his love of flying, he chose a P–51 fighter tattoo. He flies to Block Island and Cape Cod. Another of his aviation tattoos honors his late wife, who died in 2007, while a third celebrates the life of his late father. That one shows a Cessna towing a banner with his father’s name. His instructor is an Embry-Riddle graduate who said he would never get a tattoo—until the day he sat down in the chair and got one from his student.

It’s difficult to find a stronger supporter of general aviation than Winona Sheriff’s Department Capt. Steve Buswell. He spreads the word to anyone noticing his AOPA tattoo, which he proudly applied in 1999. He is an AOPA Airport Support Network volunteer for Winona Muni-Max Conrad Field in Winona, Minnesota. He organizes the airport’s Fly-in and Drive-in Airshow and Breakfast, now in its twelfth year. And he talks up aviation person-to-person in his community. He is such a good ambassador of AOPA that hundreds of people over the years have asked if he is on the staff. He had the fortune to work with Minnesota Hall of Fame member George Bolon, who is not only director of operations and chief pilot at a Winona FBO, but also one of the founders of the Winona State College aviation program. His favorite phrase? “A positive approach always has positive results.” If you arrive at the airport late at night, especially around the time the Oshkosh airshow is in progress, it may be Steve who comes out, picks you up, and gives you a ride to the hotel.