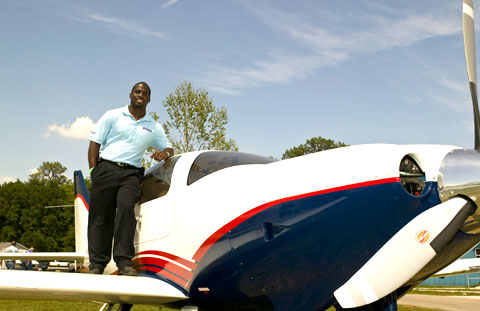 Barrington Irving, a Jamaican-born, 23-year-old pilot who flew around the world in a custom-built Columbia 400 called Inspiration, is listed in the Guinness Book of World Records 2012.

Irving, now 27, circumnavigated the globe between March 23 and June 27, 2007. His 97-day flight is in the world record book for the “youngest person to fly solo around the world” as well as the “first-ever solo circumnavigation flight by a black pilot.” Irving’s record-setting flight was designed to inspire young people—especially disadvantaged youth—on the opportunities and joy of aviation.

He was turned on to aviation himself when he was 15 years old, growing up in the inner city of Miami. Aviation, he said, was his ticket out of poverty. His organization, Experience Aviation dedicates itself to inspiring young people.