The highly modified P-51D Galloping Ghost, piloted by Jimmy Leeward, 74, crashed into the box seat area in front of the main grandstand during the Unlimited Class qualifying round at about 4:20 p.m., the air race confirmed in a statement. The remainder of the air race was canceled.

The number of deaths has increased to 11, including the pilot. Media reports indicate that one spectator is missing. According to Saint Mary’s Regional Medical Center, one of the facilities treating spectators from the air race, patients are being treated for “fractures of the legs, arms, ribs and fingers, head injuries, amputations, abrasions, lacerations, and chemical burns.”

"We are deeply saddened by this tragedy,” said AOPA President Craig Fuller. “Our thoughts and prayers are with all those who have been affected. The most important thing right now is to care for the victims of this terrible crash. There is no point in speculating about the cause at this point. The NTSB will conduct a thorough investigation and we will await their findings."

Scott Meyerhoff with the Reno-Tahoe Aviation Association was supposed to be sitting in Box 41 near the grandstand where the accident occurred, but he had decided to move to be closer to his car. “The plane came straight down,” he said.

Meyerhoff said Leeward was coming out of the last turn to start down the straightaway and “called a Mayday.” However, accident investigators have not yet confirmed whether a Mayday call was made. The aircraft pulled up to gain altitude, but Meyerhoff said that’s when he knew something was really wrong: “He continued to go up.” The P-51 then made a slight turn, according to Meyerhoff, and went down in the box seating in front of the grandstand.

“I saw the impact and then I saw debris” fly into the air, said Meyerhoff, who was trying to get in touch with his friends who were in the box seats.

"He came in almost vertically," said Bill Johnson of Wrightsville, Ga. "There are no large pieces of the airplane." Johnson and his wife, Cathy, and friends were in a box maybe 75 feet from the point of impact. He said they were sprayed with fuel and had some bruises from shrapnel. "There was no fire or explosion," he said.

The impact affected several boxes, as well as some air race personnel in front of the fence, Johnson said. "It's a mess."

Meyerhoff said emergency services that were already staged at the event responded quickly while additional support crews came from Reno and other areas. Care Flight helicopters and Hueys also were quickly on the scene, Meyerhoff said. During a press conference, officials said that spectators in the crowd who had medical training also offered assistance. There is also a blood drive for the victims.

“The Reno Air Racing Association extends its most sincere heartfelt condolences and sympathies to all of those affected by yesterday’s tragic events,” the organization released in a statement. “We have always considered the pilots, performers, sponsors, vendors, volunteers, staff and, most importantly, our fans to be one family. We are working and will continue to work to do whatever we can to console and help our family.”

A memorial scheduled for 1 p.m. Sept. 17 was canceled earlier in the day; the Reno Air Racing Association said it would announce a public memorial in the near future. 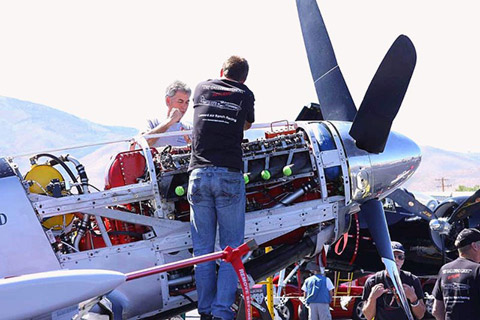 Leeward, a real estate developer out of Ocala, Fla., and former movie stunt pilot, started competing in air races in the mid-1970s, according to his Facebook page. His credits as a movie stunt pilot include flying a P-51 for the 1995 TV movie The Tuskegee Airmen. Leeward was an instrument-rated commercial pilot with helicopter, glider, and multiengine ratings as well as single-engine land and sea. He also had numerous type ratings.

“We are very saddened by all of the people who were injured or killed,” Meyerhoff said.