Get the app Get the app
AOPA Members DO more LEARN more SAVE more - Get MORE out of being a pilot - CLICK HERE
News & Media Keep flying: AOPA, EAA work to expand 'driver's license medical' 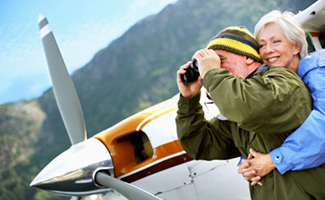 Imagine keeping your four-seat airplane but not dealing with the high cost and stress of renewing your third-class medical. AOPA and the Experimental Aircraft Association (EAA) on Sept. 24 unveiled plans that, if successful, could greatly expand the number of pilots who could use the driver's license medical standard currently available only to sport pilots.

On the final day of AOPA Aviation Summit, AOPA President Craig Fuller and EAA President Rod Hightower said the two groups are working together to finalize a request to create an exemption allowing pilots flying recreationally to use the driver's license medical standard. In order to ensure and even enhance safety, pilots would be required to complete a comprehensive course on aeromedical factors and self-certification.

“We have more than five years' experience now with the sport pilot certificate and the driver's license medical standard,” said Hightower. “In that time, we have not had a single medical incapacitation accident. The standard works.”

“Furthermore, our petition would enhance safety by requiring initial and recurrent training about health awareness and medical self-certification for any pilot choosing to use the driver's license standard,” added Fuller. “And it will provide data that can be used to continually refine and evaluate the effectiveness of the standard.”

AOPA and EAA plan to file their request for exemption after the first of the year. Under the proposed exemption, pilots holding recreational, private, commercial, or airline transport pilot certificates who only fly recreationally could choose to use the same driver's license medical self-certification standard currently available to sport pilots.

In addition to holding a driver's license as proof of adequate health, a pilot also would be required to participate in a recurring online education program that would reinforce and expand a pilot's understanding of aeromedical factors and self-certification requirements. AOPA andEAA believe such an education program, developed by the Air Safety Institute in consultation with AOPA's Board of Aeromedical Advisors and EAA's Aeromedical Advisory Council, would provide an equivalent level of safety as a third class medical.

As envisioned, the exemption would be limited by aircraft size and type of operations—for example, a single-engine aircraft, with 180 horsepower or less, four seats or fewer, and fixed gear and operations limited to day VFR, with one passenger. That would greatly expand the number of aircraft a pilot might fly while operating under a driver's license medical standard.

AOPA and EAA estimate that the exemption could save pilots who currently fly with medical certificates nearly $250 million over 10 years, and save the federal government more than $11 million over the same period.

The associations believe the exemption they plan to request is the next logical step in the journey begun when the FAA permitted sport pilots to use the driver's license medical standard. Further, the associations believe the exemption will maintain or enhance aviation safety by improving knowledge and awareness of aeromedical factors through recurrent education for all pilots utilizing the exemption, and by encouraging pilots to continue flying aircraft with which they are already familiar.

If you are interested in this initiative and would like to receive email alerts on the progress of this petition, including a notice on when you can submit comments to the FAA, please sign up here.