Get the app Get the app
News & Media Fly-Outs: First Flight Airport

Celebrate the beginning of flying season on the East Coast with a pilgrimage to the birth of flight--First Flight Airport (FFA) in Kill Devil Hills, North Carolina. 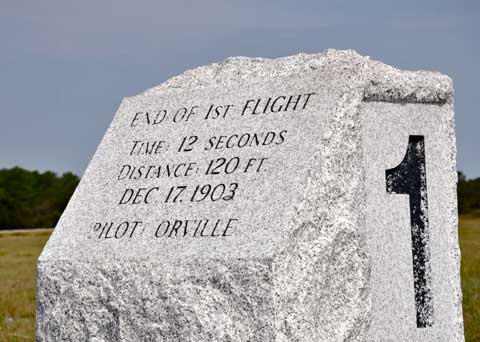 Celebrate the beginning of flying season on the East Coast with a pilgrimage to the birth of flight—First Flight Airport (FFA) in Kill Devil Hills, North Carolina.

It is on this narrow strip of sand that two brothers changed the course of history. On December 17, 1903, brothers Wilbur and Orville Wright achieved the first successful powered airplane flights. Fifty years later, Congress acquired the 425 acres surrounding the site of those first flights and created the Wright Brothers National Memorial. First Flight Airport was added to the park in 1963. It is adjacent to the Wright Memorial Shaft, a 60-foot granite monument in the form of a triangular pylon, which sits atop the 90-foot dune known as Big Kill Devil Hill. The dune was the site of the more than 1,000 glider flights the brothers took.

At the Wright Brothers National Memorial Visitor Center, exhibits include full-scale reproductions of both the 1902 glider and the 1903 flying machine, an engine block from the original 1903 Flyer, and a reproduction of the Wrights’ first wind tunnel.

Flying in is relatively easy since the 3,000-foot-long runway is meticulously maintained, but the area is subject to strong crosswinds. The runway is not lit and night operations are not allowed.

The AOPA Pilot Facility opened in 2003. To commemorate the 100th anniversary of flight, AOPA members contributed to its construction.Pilots can sign an online guestbook and receive a certificate commemorating their flight into First Flight Airport.