Get the app Get the app
AOPA will be closed July 4th, in observance of the Independence Day holiday. We will reopen at 8:30 am ET on Tuesday, July 5.
News & Media Pilot Briefing

‘This is what I must do’ Namesake pursues Amelia Earhart's dream A Denver TV news reporter with a distinctly aeronautical name is reaching for a future in aviation modeled on an ancestor’s historic past. KUSA-TV 9 News reporter Amelia Rose Earhart says she knew after taking a first flight lesson in 2004 that she and her famous ancestor had more than a name in common. 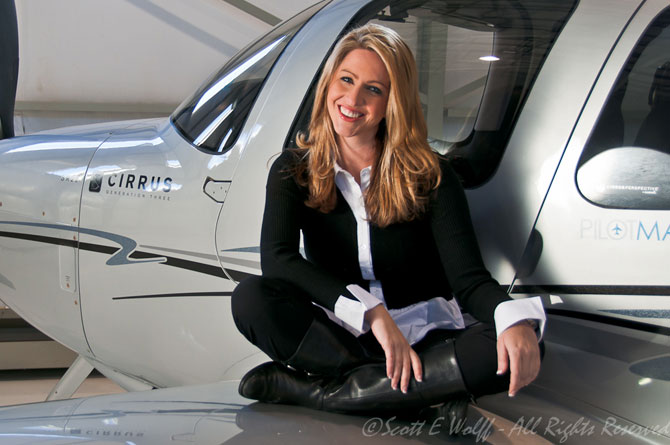 ‘This is what I must do’

A Denver TV news reporter with a distinctly aeronautical name is reaching for a future in aviation modeled on an ancestor’s historic past.

KUSA-TV 9 News reporter Amelia Rose Earhart says she knew after taking a first flight lesson in 2004 that she and her famous ancestor had more than a name in common. Now a private pilot training for an instrument rating, Earhart recently completed a flight from California to Florida, a flight designed to re-create some of the milestones that led up to Amelia Mary Earhart’s 1937 attempt to encircle the globe.

She wants to gather experience with additional flights, and in 2016 she plans to make the journey around the world.

As you would expect from a pilot who works in mass media and has covered every kind of news from the crime beat to weather in aircraft—including six years reporting news from helicopters—Earhart makes it a snap to follow her exploits through a flight-journal blog with photos, wing-mounted video, and Skype reports.

Earhart said that in addition to her work as a broadcast journalist, and her long-range plans in aviation, she is also working on a degree in broadcast meteorology through Mississippi State University—surely a plus for the kind of flying she has in mind.

For Earhart, the Oakland-to-Miami flight legs provided an opportunity to bite off a large chunk of cross-country experience toward her instrument rating while re-creating aviation history.

Sometime this year she plans to fly to Paris.

Meanwhile, instrument training definitely appeals. “It’s more enjoyable than even private pilot training was,” she said. “I like the precision of it. There’s a place you are supposed to be at all times.”

Asked about her ties to Amelia Mary Earhart, the young pilot described the relationship as “distant,” forged by common ancestry and a shared surname.

More important, she says, is that Amelia Mary Earhart stands out as “a positive female role model” and the inspiration to follow a dream. —Dan Namowitz

Build A Plane’s Kids Across America is a chance for kids to help kids support the future of general aviation. Encourage your child to find sponsorship for every mile they travel to reach EAA AirVenture 2012 in Oshkosh. Come by airplane or automobile, bus or bike—any means of transportation qualifies. Kids Across America will raise money for youth aviation education programs. During AirVenture, all participants will receive a goodie bag and be invited to a special event at the show. Prizes include a training package from Redbird Flight Simulations, tropical vacations, headsets, and more—awarded to the kids who raise the most money. Make this year’s Oshkosh special for your child by enrolling them in Kids Across America. To register or for more information, log onto BuildAPlane.org or call 804-843-3321. —Lyn Freeman

The new Cirrus SR22 for 2012 has an additional seat for a total of five occupants, and an on-board satellite telephone system that allows voice and text messaging in flight and worldwide weather radar coverage.

The airframe, engine, and avionics are unchanged from previous versions.

Cirrus is offering “60/40 FlexSeating” in back that allows more room for rear-seat passengers and reclines slightly. The company also has an option for an additional set of seatbelts that allows two children and an adult to share the rear seats. Unlike other options that typically add weight, the new seating system is 10 pounds lighter than the one it replaces.

The Global Connect satellite phone system operates on the Iridium network and adds $14,900 to the price of a new SR22. During a demonstration flight at AOPA headquarters in December, AOPA staff tested the text messaging capabilities. The same keypad used for programming the GPS is used for typing and sending text messages. Matt Bergwall of Cirrus explained that the option was added in part because of the company’s customers who are not pilots and want to remain connected while en route on business or other travel.

New aircraft prices this year range from $449,900 for a base model SR22 with a Garmin G1000-based Perspective avionics suite, and a two-year warranty to $709,900 for a turbocharged SR22T with a Carbon trim package, air conditioning or ice protection, built-in oxygen, and Perspective panel. (Base model 2012 SR22Ts are priced at $544,900.) The price for new SR20s is set at $289,900 for airplanes that include Perspective panels with two 10-inch screens.

The National Aviation Hall of Fame has unveiled the four people who will be enshrined in 2012 in recognition of their aviation achievements.

Geraldyn “Jerrie” Cobb, a flight instructor and air race champion, was the first woman to successfully complete the astronaut testing protocol designed for the Mercury 7 astronauts.

Keith Ferris is an aviation artist, historian, lecturer, and inventor. His mural of the B–17 Flying Fortress fills a wall in the National Air and Space Museum’s World War II aviation exhibit in Washington, D.C.

The late Lt. Gen. Elwood R. “Pete” Quesada helped to develop and successfully demonstrate air-to-air refueling in 1929. He later helped to establish and was head of the FAA.

The late Richard T. Whitcomb, an aeronautical engineer who spent most of his career at NASA’s Langley Research Center, developed the Area Rule, in which the shape of a fuselage can be changed to reduce the aircraft shock wave drag that occurs near the speed of sound. He also developed the supercritical airfoil and winglets. —Jill W. Tallman

There were two main events at the recent Heli-Expo helicopter convention in Dallas: the unveiling of an all-new design by Bell Helicopter to compete in the oil-drilling- platform market, and an upgrade of a popular tourist helicopter by Eurocopter.

Bell took the prize for shock and awe at its “reveal” ceremony when it rolled back faux hangar doors to show a mock-up of the Bell 525 “Relentless,” a 16-passenger, 18,000-pound helicopter meant to carry workers to oil platforms. If all goes well, it could fly in 2014 and be certified in 2015. It will have two 1,800-shaft-horsepower engines and fly at 150 knots.

Eurocopter had to delay its curtain drop for the upgraded EC130 T2 single-engine helicopter while the crowd of thousands walked at least a city block through the Dallas Convention Center from the Bell ceremony. One company official called it an air conditioner with a helicopter built around it. That’s especially important for two of the first customers—both of them tour operators in the Grand Canyon.

One of Bell Helicopter’s most reliable helicopters ever, the Bell 47, is returning to the market. Scott’s Bell 47, a Le Sueur, Minnesota, company, plans to offer the helicopter first as a restored model and later hopes to place it in production. Two restored models were shown at Heli-Expo.

The two piston-engine models, one equipped as a utility rotorcraft and the other in executive configuration for training, did not yet have the needed supplemental type certificate for new avionics, but can fly with the original avionics. It may take until 2013 to win the necessary type certificates. The company has six additional Bell 47s awaiting refurbishment.

There was strong interest in the 1950s-era helicopters. The helicopter was featured in a movie and television series, M*A*S*H, depicting a medical company during the Korean War. The refurbished aircraft will be offered by Scott’s Bell Inc., a portion of the Texas helicopter Company that operates more than 20 of the old Bell 47s for agricultural use. The company makes spare parts for the Bell 47.

“They’re flying trucks, built like tanks,” said Chris Meyer, general manager for Texas helicopter company. “They’re no speed demons, going 75 to 80 knots,” he added. The utility Bell 47 is offered at $311,000, while the one with the executive interior and Aspen glass cockpit is $367,000.

They make safe trainers, according to Neil Marshall, general manager of Scott’s Bell 47, because the blades have lots of inertia. That means they keep turning in the event of an engine failure, and have been known to safely autorotate to the ground, land, rise up and turn 180 degrees, and land again despite the lack of engine power.

Part of the restoration plan hinges on the availability of engines. The Bell 47 uses the Lycoming VO-435, generating 220 to 240 horsepower. An STC allows the use of the 265-horsepower Lycoming VO-435-A1F. Neither of the two refurbished helicopters was in the Korean War.

A California producer of wire-bound books of charts designed for handy cockpit use shut down because of a preliminary step by the FAA. Owner Dan Johnston said EZFlightChart.com was forced to pull the plug on a service that had drawn about 2,000 subscribers and one-time buyers because the FAA’s AeroNav program office cut the lead time on the release of digital charts from 17 days to one day prior to expiration.

AOPA will meet with FAA officials to discuss an authorization from Congress to recover the cost of producing digital aviation charts. Johnston said the schedule of fees that will be imposed remains unknown, but the loss of lead time—and useful life—of the digital products he printed rendered the product useless.He said he developed the idea during his own flight training, convinced there was a better way to handle paper charts than folding and refolding them in the cockpit.

“We felt that our product actually increased safety,” Johnston said. “I believe it’s a distraction in the cockpit to have such a large folding chart from the FAA.”

The company obtained digital charts from the FAA at no cost, printed them, and charged $7.99 for IFR en route charts, and combined VFR sectional charts with all relevant terminal area charts into books that retailed between $12 and $22, depending on the number of charts in the package. —Jim Moore