Get the app Get the app
Already a member? Please login below for an enhanced experience. Not a member? Join today
News & Media Safety Pilot Landmark Accidents: Calm in chaos

This captain and FO had time--but didn't take it

Overlooking basic things is the cause of many accidents. Fail to set a critical cockpit control for takeoff and takeoff doesn’t occur.

Overlooking basic things is the cause of many accidents. Fail to set a critical cockpit control for takeoff and takeoff doesn’t occur. With light aircraft on long runways, pilots can get away with forgetting the flaps, but in bigger aircraft or under maximum-performance conditions, it’s a sure ticket into the rough.

On August 16, 1987—a warm summer evening in Detroit—Northwest Airlines Flight 255 was scheduled to fly to Phoenix. The flight was running a little late and the final destination in Santa Ana, California, had a landing curfew. There were thunderstorms in the Detroit vicinity, but they were not delaying departures. With numerous convective sigmets en route, it was shaping up to be a challenging but routine trip for the McDonnell Douglas DC–9-82 crew.

About 8:32 p.m., Flight 255 pushed back from the gate with 149 passengers and six crewmembers on board. The aircraft was cleared to “Taxi via the ramp, hold short of [taxiway] Delta, and expect Runway Three Center [for takeoff];” the crew was notified that automatic terminal information service (ATIS) Hotel was now current.

Ground control then cleared the flight to “exit the ramp at Charlie, taxi to Runway Three Center,” and provided a frequency change to another sector of ground control. The first officer (FO) acknowledged but did not change frequencies and then told the captain, “Charlie, for Three Center, right.” He then advised the captain that he was leaving the comm one frequency to get the new ATIS.

About 10 minutes earlier, the tower had decided to change runways because of shifting winds from the nearby storms. The pertinent parts of the ATIS noted a temperature of 88 degrees Fahrenheit, winds 300 degrees at 17 knots, and low-level wind-shear advisories. However, the flight’s dispatch package had been based on using Runway 21L or 21R, and Runway 3 Center was the shortest of the three parallels at 8,500 feet.

The captain asked the FO to verify that they could use that runway because of the high ambient temperature and the full load. The captain then missed the turn onto taxiway Charlie and had to be redirected. Ground control, again, provided the new ground frequency to the captain while the FO was looking up the departure requirements.

At 8:42:11, the flight taxied into position on Runway 3C and waited. ATC advised to expect a three-minute delay to establish “in-trail separation behind traffic just departing” and at 8:44:04 takeoff clearance was issued. That would have been a great time to make one last check of the critical items.

The cockpit voice recorder (CVR) showed engine power increasing at 8:44:21 p.m. At 8:44:45 the FO called 100 knots and “Rotate,” 12 seconds later at 8:44:57. Eight seconds after that, the stall-warning stick shaker activated. It continued until impact, with continuous aural tones and voice warnings. However, at no time during the takeoff did the takeoff warning system activate that would have indicated that the airplane was not configured properly.

Witnesses agreed that Flight 255’s takeoff roll was longer than normal and the aircraft rotated about 1,200 to 1,500 feet from the departure end of the runway. The pitch angle was noticeably higher than that of other DC–9s, and the tail came close to striking the runway. Only a few witnesses recalled any details about the wing configuration, and most believed the flaps and leading edge slats were extended.

Once airborne, the DC–9 began rolling, about 35 degrees left and right. After striking a light pole 2,760 feet beyond the end of the runway, the aircraft rolled left and continued across several rental-car parking lots, striking a second light pole and the roof of a building. It continued rolling, hitting a road and striking a railroad embankment, disintegrating as it went. Numerous fires erupted. One passenger survived; 148 passengers and six crewmembers were killed. On the ground, there were two fatalities, one serious injury, and four minor injuries.

The 57-year-old captain was properly qualified with more than 20,000 hours of flight time and more than 1,400 in the DC–9-82. He was described as capable and competent—a pilot who used checklists regularly and “flew by the book.”

The 35-year-old FO had more than 8,000 hours and had been flying for the airlines for more than eight years. He had more than 1,600 hours in DC–9-82s. He, likewise, was described as capable and competent. There were no indications prior to the accident that the crew was less than professional, nor did their training records reveal any weaknesses.

The DC–9-82 was manufactured in 1981. According to the NTSB, “Examination of the airplane flight and maintenance logbooks did not reveal any discrepancies or malfunctions that would have contributed to the accident.” Its takeoff configuration, under the existing conditions, required the flaps to be set at 11 degrees. The leading-edge slats are automatically extended to an intermediate position, and this configuration was required to provide enough lift for the aircraft to become airborne.

The aircraft was equipped with multiple automated systems. According to the NTSB report, “The takeoff warning system is powered by power supply two and is programmed to provide a modulating horn for one second, followed by a voice warning identifying the system or systems, control or controls not properly configured for takeoff. Thus, if the slats are not set for takeoff and the slat takeoff light is not illuminated, the warning system will state the word slats; if the flap handle is not in agreement with the value set in the flap window of the takeoff condition computer, the warning system will state the word flaps.”

At the time of the accident, Northwest Airlines procedure required the crew, upon first receiving the aircraft, to test the takeoff warning system. The accident crew received the aircraft in Minneapolis and presumably checked the system there, but was not required to check it upon departure from Detroit. (Enough time had elapsed that the CVR had overwritten the Minneapolis predeparture briefing.) After the accident the FAA required that the system be checked prior to each takeoff.

The flight data recorder and physical wreckage showed that the flaps and slats were retracted. There was no indication that the takeoff warning system had sounded, although later tests on the undamaged unit showed normal operation. The best evidence the NTSB could find that the unit was inoperative was the possibility of a single tripped circuit breaker, but it could not be conclusively determined if, or when, the breaker had tripped and if the crew running the prestart checklist could have detected it.

Reconstruction of the actual takeoff showed normal acceleration up to rotation. With flaps set the DC–9-82 normally will lift off between six degrees and eight degrees nose-up pitch. The accident airplane stabilized at 11 degrees to 12 degrees pitch and lifted off at 168 KIAS.

The clean stall speed was 170 KIAS, and the stick shaker activated 0.5 second after liftoff and continued to operate. At 4.5 seconds after liftoff, when the airplane was over the departure end of the runway at 10 feet agl, the CVR recorded aural stall warnings. The flight climbed to 45 feet and accelerated to 186 knots, but because of decreased roll stability in the incipient stall, the climb rate was insufficient to clear the obstacles.

The NTSB determined “that the probable cause of the accident was the flight crew’s failure to use the taxi checklist to ensure that the flaps and slats were extended for takeoff. Contributing to the accident was the absence of electrical power to the airplane takeoff warning system, which did not warn the flight crew that the airplane was not configured properly for takeoff. The reason for the absence of electrical power could not be determined.”

The taxi checklist is normally where the FO would have set the flaps, but it appears he was distracted by the runway change, the need to update the ATIS, and having to consult the Runway Takeoff Weight Chart Manual to verify that the flight was legal for takeoff on Runway 3C. This was in addition to helping prepare the aircraft for flight and some discussion regarding the weather en route. The flight was operating behind schedule; thunderstorms were in the area; and the crew was facing an airport curfew at the final destination in Santa Ana. No pressure! 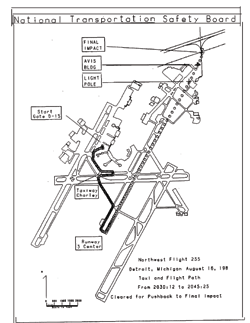 This is the 1987 NTSB report diagram showing the ill-fated taxi and flight path of Northwest Flight 255.

Flaps are a “killer” item, and that’s why there are takeoff-warning systems on many bizjets and airliners to serve as a final check. But as we have seen in some recent accidents and numerous Aviation Safety Reporting System accounts, automation is very good but not perfect—and that very reliability causes humans to let down their guard. The warning systems become primary and the human the backup, which is not the design philosophy for these aircraft.

This may come as a shock, but we do not operate consistently at 100 percent, either—this crew was a little off the pace with the FO missing the frequency change, the captain missing the taxiway, and the failure to run the taxi checklist, which appears to be the critical fault. And while those of us without sin may cast the first stone, “killer” items on checklists are precisely that.

A Delta Air Lines Boeing 727 suffered a similar fate a year later in Dallas, when the crew failed to set flaps and a takeoff warning system malfunctioned.

The Northwest crew had more than 28,000 flight hours between them and as far as their records show, they’d never made a critical mistake that resulted in an accident. There were numerous distractions because of a runway change. The takeoff warning system that should have provided that critical bit of configuration data didn’t. The classic accident chain scenario played out, to tragic results. It also shows why rushing during any phase of flight can be deadly. When things start to compress, that’s exactly the time to slow down. Ask for extra time on the ramp or run-up pad, or a delaying vector while airborne—it’s the mark of a pro.

Any time another pilot or an automated system reminds you of a killer item, or you catch yourself at the last minute, fine yourself $20. If this happens often, consider changing your procedures. Gravity doesn’t forgive.