Get the app Get the app
News & Media Technique: Mountain majesties

Learning to fly amidst towering peaks

Learning to fly amidst towering peaks

The AOPA Air Safety Institute’s popular Mountain Flying online course gives you a great introduction to the special skills required for mountain flying. The free course was recently revamped with new graphics and content. Supplement it with AOPA’s Guide to Mountain Flying, a compilation of ASI resources and articles from AOPA Pilot. 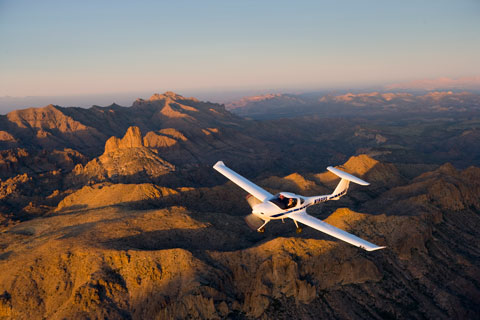 There was something about preparing to land on Runway 16 at Afton Municipal Airport in western Wyoming that just didn’t look right.

Had the flaps not fully deployed? No, a quick glance showed they were all the way down. Had a headwind suddenly shifted to a tailwind? No, the airport windsock still showed a light breeze out of the south that was nearly aligned with the landing runway.

The prelanding checklist items had been completed, checked, and double-checked, but the disconcerting view of the ground rushing by seemed to indicate something was amiss. Over the runway, the airplane settled into ground effect and touched down without incident.

But this first landing, after flying all day from the Midwest, confirmed something all pilots learn in ground school but don’t always fully appreciate: Flying at higher elevations (Afton is 6,221 feet above sea level) is just different. And a noticeably faster true airspeed (for any given indicated airspeed) is just one of the myriad factors that make flying among mountains challenging.

There is a great deal to learn about diminished aircraft performance, reading winds and cloud formations, dynamic and sometimes highly localized weather conditions, physiology, outdoor survival, and other vital subjects. And specialized instruction is available from expert pilots in these regions who are more than willing to help newcomers delve into such subjects practically and safely.

On my first flight to the mountainous West, I was surprised to find the same kinds of normally aspirated piston airplanes on airport ramps that populate the flatlands, and turbocharged models made for thin air were largely absent. Lowly Cessna 152s, Piper J–3 Cubs, and other relatively low-performance airplanes can do just fine in the mountains as long as their pilots take care.

The reward for pilots who learn to balance the demands of mountain flying is aerial access to some of the most remote, spectacular, and awe-inspiring places on Earth (see “Aerial Amazement,” page 66). Timeless and towering mountain ranges provide a perspective that makes us feel both tiny and transitory, and that’s never truer than when flying among them. Mountain flying inspires humility, and that quality—perhaps more than anything else—is a requirement for success.

Michael Collier, a geologist, writer, and photographer, has flown his Cessna 180 for more than 5,000 hours, ranging from his home in northern Arizona (at 7,000 feet msl) to Alaska and Central America—mostly over the jagged mountain chains he studies. His familiarity with his airplane helps him to eke out maximum performance in conditions in which it’s needed.

“I know what climb rate I can expect given my airplane’s weight and airspeed,” he said, “and I know exactly when it’s going to stall. I might be able to translate this knowledge to another airplane, but it will only be an approximate translation.”

Of course, horsepower in nonturbocharged engines diminishes as altitude increases. And pilots must use their airplanes’ limited power to gain the airspeed (not GPS groundspeed) necessary to climb and maneuver above rugged terrain, and the powerful and shifting winds they are likely to encounter there.

“On takeoff, I want airspeed first—then altitude,” Collier said. “I try to think of the air not as an invisible, inscrutable foreign agent, but as a fluid medium which will behave in a somewhat predictable manner. It will rise when the wind blows up a ridge, and it will fall when passing the ridge. Usually.”

The movement and shape of clouds allow knowledgeable pilots to anticipate winds and turbulence. Lenticular clouds—those denizens of high winds and high elevations—demand respect and caution. Look downstream from the lenticular clouds and realize that strong winds are almost sure to exist there, even if insufficient moisture has collected to make the wind visible to our eyes.

Mountain clouds often form near the highest terrain, then spread out across the sky and become more generalized later in the day. Pilots must know and recognize such patterns and learn to think in three dimensions so they don’t get caught by surprise. The last place anyone wants to be in an airplane is bumping against a cloud ceiling in high terrain while racing to squeak through a mountain pass.

Being able to recognize changing winds and weather also allows pilots to be considerate of passengers. Simply knowing that turbulence is to be expected while approaching or passing a ridge while the wind is blowing in a certain direction can reduce their anxiety and allow them a feeling of control in an otherwise frighteningly unfamiliar environment.

Watch rivers and streams and take note of the direction the water is flowing. Take precautions when flying upstream (in the direction of rising terrain), and always leave yourself an out. Know the minimum safe altitudes in the regions where you’re flying. When approaching a mountain pass, aim high so as to clear it by a wide margin, and fly to the side on which you expect to encounter rising air.

Expect the unexpected, as rapidly changing conditions can surprise even experienced mountain pilots. And pilots who have logged many thousands of hours flying in the mountains are the most circumspect about flying there at night, or in the clouds, as doing so surrenders some of the best options for dealing with unforeseen events.

“Even if I know the routes and the passes, I’ll think it over three times before flying in the mountains at night,” Collier said. “Maybe four.”

Some pilots bring elaborate supplies of emergency gear for surviving harsh conditions after a forced landing (see “Survival Mode,” page 58). Others are minimalists. Some airplanes are equipped with modern 406 MHz ELTs that show their position with pinpoint GPS accuracy. Other pilots are satisfied with the old kind that broadcast on 121.5 MHz. Some pilots insist on carrying personal locator beacons (PLBs), SPOT, or Spidertracks GPS locators (see “Products: A Range of Rescue Devices,” page 95).

Collier considers the following items essential for all mountain flights: water, a warm coat, handheld radio, ELT, GPS, and an iPad. A box in the baggage compartment of his Cessna contains more emergency gear: a space blanket, signal mirror and panels, bug spray, an air pump and a spare inner tube/tire, an extra quart of engine oil, duct tape, knife, hand tools, nuts and bolts, a saw, a fold-up shovel, tie-down webbing, and a good book.

But the most important thing pilots flying in mountainous regions should bring is a spirit of adventure, a willingness to learn, and openness to inspiration.

“Looking out at the mountains from the perspective of a general aviation aircraft can be an incomparable experience,” Collier said. “There are many reasons to do it, but above all else, mountain flying should be fun. Otherwise, what’s the point?”