Get the app Get the app
AOPA will be closing at 2 pm ET on Friday, July 1, in observance of the Independence Day holiday. We will reopen at 8:30 am ET on Tuesday, July 5.
News & Media VFR in to IMC: Learn to escape the odds

VFR in to IMC: Learn to escape the odds 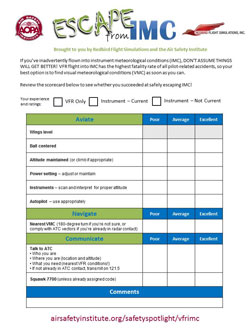 A summer flight in hot, hazy conditions with five miles visibility deteriorates almost imperceptibly. The visibility in the haze continues to worsen as you head toward your destination; soon, you’re in instrument meteorological conditions. Or, flying over mountainous terrain, the overcast cloud layer continues to lower, forcing you closer to rising terrain. Which scenario is more dangerous? Both can be lethal.

The Air Safety Institute put pilots’ skills at these scenarios to the test through a Redbird full-motion simulator at the AOPA Tent during Sun ‘n Fun in Lakeland, Fla. The goal was to convey the seriousness of VFR flight into instrument conditions and reinforce basic skills—aviate, navigate, communicate—to help pilots escape such inadvertent encounters.

“Some pilots were quick to contact ATC for help, which is great,” said Kristine Hartzell, the Air Safety Institute chief flight instructor who presented some of the scenarios. “Many immediately executed a 180-degree turn back to the VFR conditions.”

According to the institute’s 2011 Joseph T. Nall Report , flying under VFR into instrument conditions is the most common—and deadliest—weather-related accident in general aviation. “Over the past ten years, 86% of VFR-into-IMC accidents have been fatal, causing 518 individual deaths,” the 2010 report states.

The Redbird scenarios ran four to five minutes, starting the pilot off in VFR conditions and adding deteriorating weather. How long does it take to become disoriented? The institute’s Pilot Safety Announcement states that pilots can quickly get disoriented and have an average of 178 seconds to take appropriate corrective action to prevent an accident. Pilots in these Redbird scenarios were briefed on the flight before entering instrument conditions, and all escaped without causing an accident. A few of the pilots were also instrument rated, even though most were not current, Hartzell noted.

AOPA Corporate Pilot Mark Evans also conducted the scenarios and said that some pilots continued in the instrument conditions until he began asking questions about their decision making. The Air Safety Institute will present the scenarios again at EAA AirVenture this summer in Oshkosh, Wis. VFR pilots are encouraged to try the scenario to see how they would control the aircraft in such conditions. Pilots can brush up on their knowledge before putting their skills to the test at AirVenture by checking out the institute’s VFR into IMC Safety Spotlight.