Get the app Get the app
AOPA Members DO more LEARN more SAVE more - Get MORE out of being a pilot - CLICK HERE
News & Media IFR Fix: A truer test 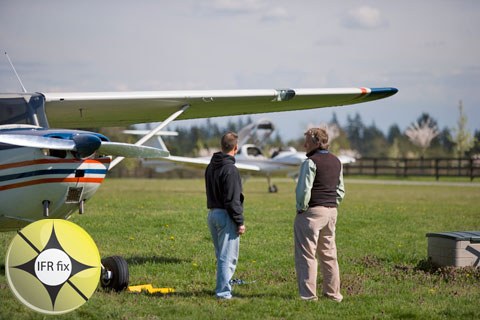 Looking for a challenge that will tax your IFR knowledge to the limit and hone your skills, leaving you dry-mouthed and drained?

Forget about flying partial-panel NDB approaches in gusting crosswinds. Here’s something better: Try explaining what it means to be an instrument pilot to someone who knows nothing about aviation.

Win or lose, you’ll be a better IFR aviator for the effort, based on the idea that if you can explain instrument flying to somebody who asks what’s so “special” about “spatial” disorientation, you must really know your stuff.

The only harm that could come is that you become so impassioned that you decide on the spot to abandon your career for the fogbound life of a CFII.

Even if you never seek out the challenge, it will find you. You’re snagged at a party by someone who heard that you earned your instrument rating. “Congratulations,” the well-wisher says. “What exactly does this mean?”

Start by telling them how you learned to mistrust.

There you were in your trainer, fogged glasses on, head down, your flight instructor waggling controls until certain that you had no idea which way was up.

Asked to venture a guess, you said the aircraft felt like it was in a climbing right turn. Commanded to look up at the panel, you interpreted the display and recovered from a dive to the left. A few more recoveries and you were ready to quit for the day—and perhaps skip dinner. (No need to mention that part to the party guest—nor is it necessary to use terms like “graveyard spiral” in your narrative).

Those early demonstrations had effect, you explain, and the law of primacy did its work, selling you permanently on the idea that trusting your usually infallible instincts in the clouds was folly when the instruments said otherwise.

Later, you explain for the partygoer, your training moved on to advanced study of weather, radio navigation, and instrument approaches, which are the procedures that get you below the clouds and safely back on the ground. There were other subjects: airspace, aircraft systems, emergencies, to name a few. When you passed the flight test, you became one of approximately 60 percent of all pilots with private and higher certificates qualified for IFR.

“How interesting,” the partygoer says, spearing a meatball on a toothpick. “I had no idea what was involved.”

Feeling a bit of vertigo, you excuse yourself and go sit down.