Get the app Get the app
AOPA will be closing at 2:30pm ET Wednesday, November 23rd, and will remain closed Thursday and Friday in observance of the Thanksgiving holiday. We will reopen Monday November 28th at 8:30am ET.
AOPA Members DO more LEARN more SAVE more - Get MORE out of being a pilot - CLICK HERE
News & Media Joyce's first flight

For the past 30 years Joyce Kline has served the membership of AOPA, answering their questions when they call, responding to letters and now emails, and generally helping out members in any way she could. As a senior representative of the Member Services division of the organization, Kline knows just about everything about AOPA a valued representative could—except one thing. She had never been in an airplane—any airplane.

But the morning of April 6—a brilliant blue sky day at Frederick, Md., headquarters—Kline told a coworker that she’d peered inside an open door to the cockpit of one of AOPA’s aircraft and thought maybe she wouldn’t mind a ride.

You don’t have to tell a pilot that twice. Soon Kline was flying in a Cessna Skyhawk over her Middletown home with AOPA Corporate Pilot Mark Evans.

“I have been petrified all of my life to get in an airplane,” Kline said. “But it was nice. I surprised myself.”

Kline will retire from AOPA April 30. 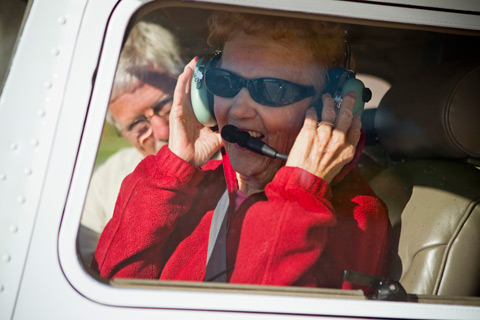