Get the app Get the app
Already a member? Please login below for an enhanced experience. Not a member? Join today
News & Media Flying history

A five-ship formation of North American B-25 Mitchells depart in rapid succession, a 20-degree, 30-plus-knot crosswind causing little excitement in the cockpits. The World War II bombers join up over Grimes Field in Urbana, Ohio, for a mission to bring attention to another mission, one that launched 70 years ago from the USS Hornet on April 18, 1942—the Doolittle Tokyo Raid.

The pilots and crew of these restored B-25s are volunteering their time to fly 45-minute hops, returning to cheering spectators with their passengers exploding with excitement after a ride of a lifetime—all because 70 years ago, 80 men on 16 bombers launched on a one-way mission from an aircraft carrier, flew hours into hostile territory, and bombed the Japanese mainland.

“It’s the first and the last time we could ever do this.

The aircraft are among 20 expected at the Grimes Gathering of B-25s to honor the Doolittle Tokyo Raiders—led by Lt. Col. James H. "Jimmy" Doolittle—the crew of the USS Hornet, and the Chinese who helped them. The gathering, April 14 through 16, started with steady rain that prevented many aircraft from arriving early, but better weather is providing a window that will allow more aircraft to join a mass formation flyover of the National Museum of the U.S. Air Force at Wright-Patterson Air Force Base on April 18 during a special ceremony. Events will continue through April 20 at the museum.

“This is not a fly-in, it’s a history lesson,” said Larry Kelley, organizer of the Grimes Gathering of B-25s and pilot of Panchito, the lead aircraft in the mass flyover to commemorate the anniversary of the raid. “It’s the first and the last time we could ever do this,” he said, explaining that the Grimes Gathering and National Museum of the U.S. Air Force will bring together the five remaining Doolittle Tokyo Raiders—Lt. Col. Richard E. Cole, Maj. Thomas C. Griffin, Lt. Col. Robert L. Hite, Lt. Col. Edward J. Saylor, and Staff Sgt. David J. Thatcher—along with a survivor of the October 1942 Japanese attack that sank the USS Hornet, a Chinese woman who assisted the Raiders, and sister ships of those mighty bombers that carried the brave young men aloft. Putting all the pieces together, including bringing two Chinese to the United States, required coordination from both countries’ governments. 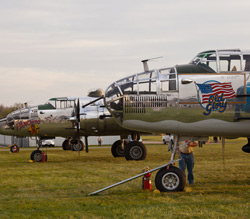 Panchito and Old Glory are polished like spot-free mirrors.

“The Doolittle Raid was the first domino in the series,” Kelley said, calling it a turning point in the war in the Pacific that put Japan on the defensive.

The Doolittle Tokyo Raiders couldn’t track to their intended destination because the aircraft transporting the beacon crashed before arriving, Kelley said, and storms had moved into the area, reducing visibility. One of the 16 aircraft turned north to land in Russia, and the crew was interned. The other 15 aircraft with 64 crewmembers went down in Japanese territory, either ditching at sea or continuing into China. Eight men were captured, three of whom were executed; another died of malnutrition. The Chinese provided aid to the Doolittle Tokyo Raiders to help them return to friendly soil, something the civilians paid for dearly: A quarter-million Chinese were killed in retaliation for the protection the Doolittle Tokyo Raiders received.

“I think the Doolittle Raiders was one of the more daring things I’ve read about,” said Bruce Bream, who flew his Arrow III to Grimes Field with friends. Nearly 20 light general aviation aircraft had flown in by midday April 15.

Announcers recounted the raid for hundreds of spectators from toddlers to nonagenarians who gathered to see the B-25s, P-51s, and a Japanese Zero on display. Veterans from all branches of the military who served in various wars from World War II to present and active duty servicemen and -women also came out to pay tribute.

General aviation pilots start flying in April 15 after the first day of the Grimes Gathering of B-25s was weathered in by heavy rains.

Jim Gower racked up about 200 hours piloting the B-25 at the end of World War II during missions in Midland, Texas, and Carlsbad, N.M., where he was stationed. Chinese, Brazilian, and Turkish servicemen were trained to fly the B-25 at those locations, he explained. Gower entered the Army Air Corps Cadet Program in 1943. He graduated in 1945, and the military sent him to college where most pilots first learned to fly in a Piper Cub. “Of course, I’d flown the Cub before, but I didn’t tell my instructor.” (He had started flight training when he was 13 years old but was forced to quit when the instructors discovered his true age.) From the 65-horsepower Cub, Gower moved up to the 220-hp Stearman, the 650-hp AT-6, and finally the twin-engine B-25 with 1,700-hp each. He had about 175 hours of flight time before getting in the left seat of the B-25. Gower recalled practicing formation flying at night, formation takeoffs, and short-field takeoffs like the Doolittle Tokyo Raiders made off the USS Hornet. Bower was discharged after the war in 1946 and began a long career in aviation that included instructing, flying a Beech 18, joining the crew of a Citation, and serving as an FAA pilot examiner.

“It means a lot for the people to recognize what flew at that time for the purpose [of the war],” Gower said, expressing disappointment that so many don’t know the Doolittle Tokyo Raid story. He was proud to see the hundreds of spectators who turned out to see the B-25s and learn about the history of World War II.

Army veteran Philip Johnson was among the World War II veterans and said it was important “to know that they’re [the Doolittle Tokyo Raiders] still being recognized.”

Crews who had their B-25 on display, like Pacific Princess, answered questions for several youngsters. Some of the children already had “a little bit of knowledge of the Raiders,” said Frank Donnelly, who flew on Pacific Princess from Los Angeles to Urbana.

The groups are paying for their expenses themselves, Kelley said, adding that for some, that bill could reach $35,000. Fuel expenses alone are staggering; each 1,700-hp engine burns one gallon of fuel per minute. Northrup Grumman and Enterprise provided corporate sponsorships, and individual donations comprised the rest of the $100,000 raised for the gathering, but that is just a fraction of the $900,000 that was needed to help offset the costs for the crews. In return, the crews are permitted to sell rides for $450 per person to help recoup some of the cost.

“Everybody said, ‘We’ll find a way to do it on our own,’” Kelley said. The crews understood the significance of the event and wanted to take part. 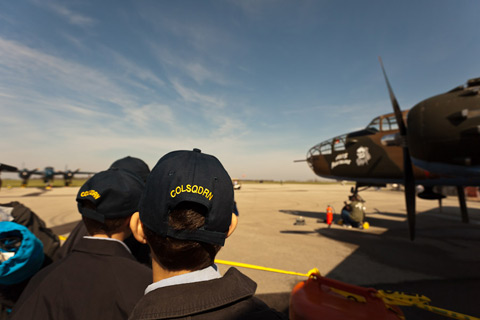 All ages gather for a living history lesson about the B-25 and Doolittle Tokyo Raiders.