Get the app Get the app
Already a member? Please login below for an enhanced experience. Not a member? Join today
News & Media B-25s making history again

Crews inspected their B-25s in the pre-dawn hours at Grimes Field in Urbana, Ohio, April 17, preparing for a 7 a.m. mass fly-out to the National Museum of the U.S. Air Force in Dayton, where they will join ceremonies Tuesday and Wednesday as part of the commemoration of the seventieth anniversary of the World War II Doolittle Tokyo Raid. Flashlight beams streamed over tires and reflected off the warbirds’ shined control surfaces as the pilots poured over every inch of the aircraft.

Poor weather, including rain and high winds in Ohio, had prevented many of the B-25s from arriving over the weekend, and snow delayed one on its way from Seattle until Monday evening. Tuesday, however, dawned with calm winds, clear skies, and 20 B-25s—what event organizers say is the largest gathering of the bombers since World War II (17 of the aircraft gathered in 2010 for the sixty-eighth reunion).

A priest blessed the aircraft and prayed for the five remaining Doolittle Tokyo Raiders: “Grant special favor, oh Lord, on the men being honored by this pilgrimage of flight, the courageous veterans of the Jimmy Doolittle Tokyo Raid of 1942. Bless them, the great virtue which they displayed on that eighteenth day of April 70 years ago; bless them for the tremendous risks and sacrifices they made for the sake of our beloved nations and for the sake of world freedom and peace.”

Crews stood solemnly, hands over hearts, while the Urbana High School Band performed the national anthem. Soon, the B-25s were starting their engines, some backfiring and quitting before roaring to life. At 7 a.m. sharp, Panchito lifted off to lead the group to Dayton, while a flagman signaled each aircraft in succession to begin its takeoff roll at 90-second intervals. Larry Kelley, pilot of Panchito and organizer of the Grimes Gathering of B-25s, said that all 20 of the aircraft would be on the ground at the museum by 8 a.m.

Ceremonies at the National Museum of the U.S. Air Force will honor the Doolittle Tokyo Raiders who lost their lives during the mission, those who have since died, and the five remaining airmen of the 80 who took off from the USS Hornet April 18, 1942, to successfully bomb Tokyo and other cities on the Japanese mainland. Additionally, a survivor of the October 1942 Japanese attack that sank the USS Hornet and a Chinese woman who assisted the Raiders will be at the event as well to tribute the servicemen and Chinese citizens who lost their lives for their role in the mission. An estimated 250,000 Chinese civilians were killed by the Japanese for aiding the Doolittle Tokyo Raiders who had crashed or bailed out of their B-25s in China.

“Too many times war is glorified without remembering events such as the tragedy of the simple Chinese farmer that had his entire family killed and village burned for the simple act of kindness shown to the American airmen who parachuted into or near his village,” Kelley reminded the participating B-25 crews in advance of the gathering. “The Sailors and officers of the USS Hornet paid dearly for their involvement in the raid when the carrier was (sunk) just six months after the Raid.” Kelley wanted to ensure that each B-25 participant arrived with a true understanding of their purpose in helping honor these men and women from World War II.

The bombers will fly again on Wednesday, this time in formation during a flyover of the museum before returning to Grimes Field. This week’s seventieth anniversary ceremonies, which will conclude April 20 at the museum, is considered to be the first and only time representatives from each aspect of the raid—the airmen, USS Hornet crewman, Chinese civilian, and B-25s—will gather at one time. 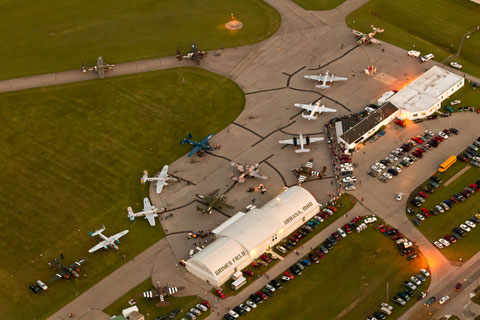