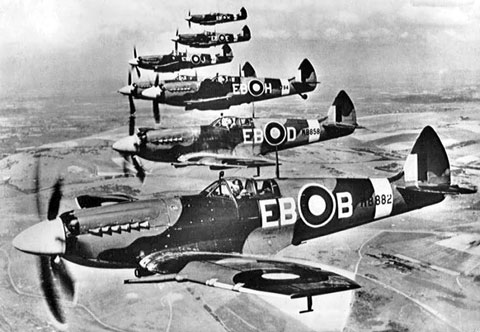 
As many as 20 Supermarine Spitfires lie in wait, and British officials have secured permission for a team of aviation archaeologists led by a farmer from Sandtoft, England, to begin digging in Myanmar soil.

An offhand remark 15 years ago from a construction battalion veteran sparked the search: The aircraft had been buried in their transport crates in the waning days of World War II. David Cundall, 62, told the Daily Telegraph that the first peek at the buried fighters suggests the aircraft may be restored.

“We sent a borehole down and used a camera to look at the crates,” Cundall told the Telegraph. “They seemed to be in good condition.”

The Spitfires, among the last of about 21,000 produced during the war, would have been shipped with protective coverings, including tar on the joints, to guard against corrosion. The Guardian reports that United Kingdom Prime Minister David Cameron has secured agreement from the Myanmar government to allow Cundall, backed by investor and flight school owner Steve Boultbee Brooks, to begin digging in earnest.

Only 35 vintage Spitfires are still flying worldwide, and hope is running high that some or all of the 20 forgotten fighters might one day return to the skies. British officials ordered the aircraft buried to guard against them falling into Japanese hands in the event of a reoccupation of Myanmar that never came.