Get the app Get the app
Get the latest news on coronavirus impacts on general aviation, including what AOPA is doing to protect GA, event cancellations, advice for pilots to protect themselves, and more. Read More
Already a member? Please login below for an enhanced experience. Not a member? Join today
News & Media Diamond shows off new airplanes and powerplants

Diamond Aircraft has always had a major presence at Aero, Europe’s premier general aviation show, and this year was no exception. On prominent display were several ambitious new projects. 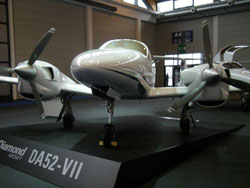 Center stage at the Diamond booth went to the company’s new DA52-VII—a 197-knot five- to seven-seater powered by two 180-hp AE300 turbodiesel engines. Actually, there were two DA52s: a mockup showing the large interior and a cockpit featuring Garmin’s G1000 avionics suite, and a flight test airplane that had only recently made its first flight. So far, the DA52 has flown at 95-percent power at 12,000 feet, burning a total of 18.6 gph. Fuel capacity of the new airplane is 93 gallons. The DA52’s performance comes via an optimized wing profile, specially tuned engines and larger propellers, said Diamond CEO Christian Dries, who added that the airplane’s single-engine service ceiling is 18,000 feet.

The DA52 will come in two versions—one for Europe, and one for the United States. The European model will have a maximum takeoff weight of less than 2,000 kilograms/4,409 pounds because above that weight punitive user fees kick in when flying European airways. The U.S. version will have a maximum takeoff weight of 4,740 pounds. Empty weights and other specifications have yet to be defined, but Dries said the price of the DA52 would run between 690,000 euros ($901,000 at current exchange rates) for a basic model to 780,000 euros ($1.02 million) for a fully equipped airplane. 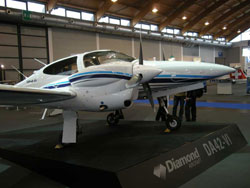 The new DA42-VI is a faster variant of the preceding DA42. Capable of 193 knots at 16,000 feet and maximum continuous power, the -VI is 10 knots faster than the DA42NG even though both airplanes use the same 168-hp AE300 engines. The extra speed is the result of aerodynamic tweaks such as sleeker engine nacelles, new propellers, new wing fairings, flush-headed screws, and a rudder design that both reduces drag and lowers single-engine minimum control speed by five knots. Fully equipped, the DA42-VII should sell for 650,000 to 650,000 euros, or about $732,600 to $850,800.

Certification dates for the DA52-VII and DA42-VI have yet to be published but both airplanes are in flight testing.

Diamond’s 55-hp AE50R engine was designed for motorgliders and an unmanned reconnaissance project now in the experimental phase. This is a hybrid design based on Diamond’s HK36 Super Dimona/(known as the Katana X-treme in the U.S. and Canada) Rotax-powered motorglider. This (manned) airplane flew at last year’s Paris Air Show and is powered by a combination of the AE50R, an electrical generator, and a battery. For takeoff, both engine and battery power are used. In cruise flight the battery can be used to conserve fuel. Meanwhile, the engine—which burns a mere three gph—and its generator keep the battery charged 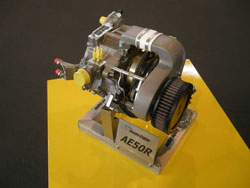 The AE500 is a six-cylinder, 280-hp multifuel engine being considered for use in Diamond’s suspended DA50 SuperStar, which originated with a 200-knot, pressurized design that used an avgas-burning 350-hp turbocharged Continental TSIO-550 engine back in 2007. An AE300-powered model called the DA50 Magnum was also tested. The AE500 has a monoblock construction and is capable of using avgas, Jet A, or biofuels.

The ‘electronic parachute’
Diamond is also at work on a fly-by-wire system that will provide airspeed envelope protection and an autoland function in case of pilot incapacitation. The system—designed with the help of Dusseldorf-based Rheinmetall AG and the University of Stuttgart—is built to detect the signs of potential pilot incapacity and sound a warning. If the pilot doesn’t respond, the system automatically chooses the nearest suitable airport and then lands using autopilot commands. First of flight of the prototype system will be next week, Dries said, using a DA42.

AOPA Pilot Editor at Large
AOPA Pilot Editor at Large Tom Horne has worked at AOPA since the early 1980s. He began flying in 1975 and has an airline transport pilot and flight instructor certificates. He’s flown everything from ultralights to Gulfstreams and ferried numerous piston airplanes across the Atlantic.
Go to Thomas A. Horne's Profile
Topics: Technology, Aircraft, FAA Information and Services