Get the app Get the app
Already a member? Please login below for an enhanced experience. Not a member? Join today
News & Media Meet the artist who designed your certificate

Meet the artist who designed your certificate 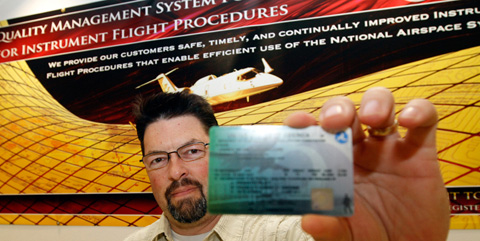 FAA Graphic Designer Bryan Dahlvang is the man who designed your pilot certificate, and more recently the poster on the wall behind him.


Outside of the sprawling campus of the FAA Mike Monroney Aeronautical Center in Oklahoma City, few pilots have probably heard of Bryan Dahlvang—but nearly all have seen his work. The standard FAA pilot certificate, updated in 2004, is the product of a team of registry officials and designer Dahlvang, who spent about as long working on the details of the design as it takes many private pilots to earn one—roughly a year.

“It seemed a lot longer, probably, than it was,” Dahlvang said.

The Wright brothers provide much of the visual appeal—and a link every pilot shares with the fathers of aviation. Dahlvang, a U.S. Air Force veteran who served more than six years as a combat computer operator, earned a fine arts degree from Oklahoma City University in 1997. He soon started working as an FAA contractor, later joining the staff full time. His background helped shape the vision for the certificate, though there was one small misstep along the way.

“I put a French Airbus on there, first,” Dahlvang admits. “I had all sorts of flak about that.”

The certificate includes many design features that pilots may not have seen, including micro printing and features only visible under ultraviolet light. Each element had to be carefully placed, line by line and pixel by pixel, “a painstaking process,” Dahlvang said.

The FAA awarded Dahlvang his own (honorary) certificate, nicely framed with a gold seal. Eight years later, the project remains a career highlight.

“It’s one of my proud moments,” said Dahlvang, who also designed the certificate issued to air traffic controllers, and a variety of more recent publications, posters, and other materials. Dahlvang also keeps busy teaching art to “teens and tweens” in public libraries across Oklahoma, and the Oklahoma City Museum of Art. He is also a talented photographer, honing artistic skills that merge with his more binary background as a computer operator.

The FAA launched the redesign effort in 2002. It was a response to a not-so-gentle prod in an AOPA Pilot column by Barry Schiff, who declared in 1999: “U.S. pilot certificates are disgraceful examples of bureaucratic indifference. Those responsible for them apparently have no concept of the blood, sweat, and tears required to earn, maintain, and upgrade the ratings so casually represented on our certificates.”

The FAA credited Schiff with spurring the redesign, and his suggestions—such as a plastic card with ratings clearly spelled out on the reverse—were incorporated in the final product.