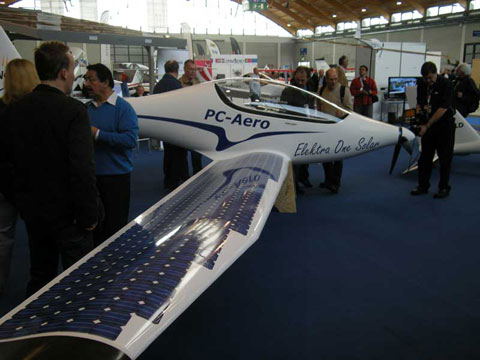 At last year’s Aero convention, PC-Aero GmbH designer Calin Gologan was on hand to unveil his first electrically powered single-seater, the Elektra One. This year, Gologan’s exhibit showed off that design’s progression to solar-augmented power. Thanks to support from prototype design specialists from Augsburg-based Neowings and engineering students from the University of Augsburg’s Department of Applied Sciences, Gologan built the first test article for his new Elektra One Solar. The airplane has solar panels attached to the upper surfaces of the wings, horizontal stabilizer, and fuselage. The solar panels power the airplane’s lithium ion battery, which in turn powers the ship’s 22-hp electric engine. The airframe is constructed of carbon fiber composite materials.

Gologan calculates that the solar panels will provide up to 50 percent of the production of Elektra One Solar’s energy, permitting cruising ranges of as much as 540 nautical miles. The Elektra One Solar will have its solar panels affixed to newly designed, 36-foot wingspan, laminar-flow wings. When operated engine-off as a sailplane, the glide ratio should be 30:1, according to Gologan. In powered cruise flight, speeds of up to 100 knots should be achievable. The prototype has logged some 20 hours of flying time as of this writing.

The beauty of the solar panels is that they not only drive the electrical system, they continually replenish the battery and even charge it when the airplane is parked on the ground. This virtually eliminates battery self-discharge. While parked in the sun, it takes only two hours for the solar panels to recharge a depleted battery.

The idea is to certify the Elektra One Solar as an ultralight under FAR Part 103 rules. To reduce the airplane’s max cruise speed to comply with Part 103’s 54-knot maximum, the propeller pitch will be changed to that of a climb prop, and flaps will be designed for the wings. Meanwhile, for the German market the airplane will fit into Germany’s light powered sailplane class and use its full 100-knot cruise potential. The airplane’s empty weight is 220 pounds, well under Part 103’s 254-pound upper limit. For an ultralight, though, the Elektra One Solar will not come cheap. So far, its price is set at 80,000 euros, or about $105,000.

Other solar-powered designs are also in the works. An Elektra Two Standard will have two seats, a lightweight Elektra Two Record will attempt record flights, and an Elektra Observer LT is designed to serve as a surveillance vehicle. The Elektra Two Record’s design goals are to reach endurances of up to 30 hours and ranges more than 1,610 nm.

AOPA Pilot Editor at Large
AOPA Pilot Editor at Large Tom Horne has worked at AOPA since the early 1980s. He began flying in 1975 and has an airline transport pilot and flight instructor certificates. He’s flown everything from ultralights to Gulfstreams and ferried numerous piston airplanes across the Atlantic.
Go to Thomas A. Horne's Profile
Topics: Electric 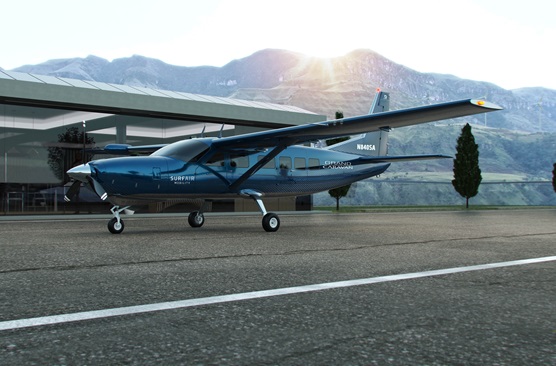