Get the app Get the app
Already a member? Please login below for an enhanced experience. Not a member? Join today
News & Media Able Flight success 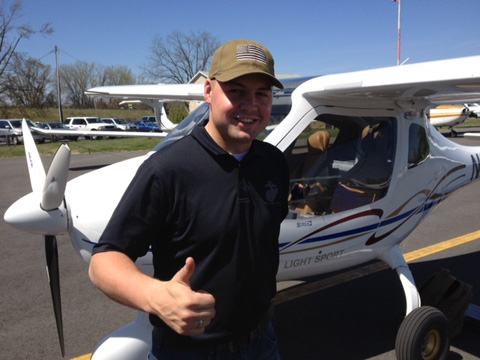 Adam Kisielewski was feeling the pressure.

The former U.S. Marine who had lost his left arm and a portion of his right leg in combat in Iraq was about to take a sport pilot checkride, and the usually cocky 28-year-old was rattled.

He had ferried the light sport aircraft, a CTLS, to Northampton, Mass., the morning of April 19, and the solo three-hour cross-country flight had gone flawlessly. But a practice checkride with a local instructor that afternoon had gone poorly—and Kisielewski doubted his odds of passing the FAA checkride scheduled for the following morning.

“I figured I had about a 70-percent chance of passing before the practice session,” he said. “But that was the worst I’ve ever flown. Now, I think my odds are about 30 percent.”
Kisielewski had logged about 35 hours of flight time since being awarded an Able Flight scholarship this year. He’d flown about 20 hours with Dean Stickell, a former U.S. Air Force fighter and test pilot and CFI, about 10 hours with me, and five solo hours in preparation for this checkride. The CTLS was provided by Northampton Aeronautics in Northampton, Mass., and we had flown there so that Kisielewski could return the aircraft and take his checkride. (I was there for moral support, and to bring him home to Maryland in another aircraft once the checkride was over.)

Kisielewski, a married father of a 2-year-old boy, said he wouldn’t mind failing the checkride so much if it were just his reputation on the line. But he didn’t want to embarrass Able Flight, wounded veterans, his instructors, or the many people he had inspired through his pursuit of flying.

“I’ll be awfully disappointed if I let them down,” he said.

Kisielewski suggested getting up before dawn the next morning and going for another practice flight before the 9 a.m. checkride, but I rejected the idea.

“You need a good night’s rest,” I told him. “A bad dress rehearsal makes for a good performance. You’ll do fine.”

If Kisielewski could focus on correcting the errors he had made on his practice checkride, the actual one would go well. But he couldn’t get discouraged or give up before the real test even started.

The day was ideal for flying, and the forecast called for light winds for the next 24 hours.

Tony Debany, the FAA designated pilot examiner, arrived right on time and got busy with the paperwork and the verbal exam. Kisielewski had a hangdog look about him all morning, and he asked repeatedly at the start of the verbal portion of the exam how soon he would be allowed to retake it if he failed. But when Debany peppered him with questions about the sport pilot rules, aviation weather, flight planning, aeronautical charts, and aircraft performance, Kisielewski knew the material cold, and his confidence returned.

He even snuck in a little amputee humor.

After 90 minutes, they boarded the airplane and took off smoothly into a serene sky.

An hour later, they returned for a series of short-field, soft-field, and crosswind landings. Kisielewski bounced one and went around on another, but several approaches and landings were flawless. Two local TV news stations and reporters from two newspapers were there to record the event. And when Kisielewski flashed a knowing smile as he climbed out of the airplane, I knew he had succeeded.

Afterward, Debany told me that Kisielewski had been thoroughly prepared, handled the airplane fluidly, and projected the bearing of a pilot in command.

“He met all the standards easily,” he said. “He lets you know he’s in charge of the airplane from the moment he gets in it, and he’s not at all timid. His emergency procedures were perfect. Absolutely textbook.”

Kisielewski was elated and relieved after the checkride and called, texted, and emailed the people who had supported him during his unlikely quest. The milestone was somewhat bittersweet, however, because the completion of his sport pilot training meant saying goodbye to the airplane in which he had learned to fly.

Kisielewski flew in the left seat of the AOPA’s Diamond DA40 on the trip home to Maryland and manipulated the stick, throttle, and even the toe brakes easily. (The CTLS was equipped with a hand brake.)

His next steps, he said, will be applying for a third-class medical certificate and earning an FAA “statement of demonstrated ability” for certain standard-category aircraft. Kisielewski plans to work toward his private pilot certificate.

“I don’t intend to stay on the ground for long,” he said. “My goal is to keep flying.”