Get the app Get the app
AOPA Members DO more LEARN more SAVE more - Get MORE out of being a pilot - CLICK HERE
News & Media IFR Fix: Knowledge is power 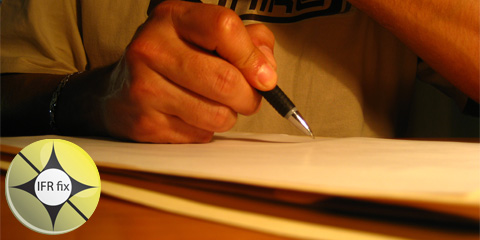 A pilot is seeking rainy-day advice from two instrument-rated friends about training for the instrument rating. Conversation ranges from available training aircraft to time involved and cost.

There are several good instructors around, the friends say, but call Cold-Front Frank first.

Talk turns to the instrument knowledge test (formerly the written test, a term that still holds much sway).

“The first thing to do is hit the books and nail that test,” says one pilot.

“Sorry, I disagree,” says the other. “What’s the rush? You might score better if you get some experience first.”

The first pilot mentions an article that urged students to get the knowledge test out of the way.

The dissenting pilot cites other published advice pointing out that a high score might impress the designated examiner on checkride day.

The first pilot responds that he took a weekend ground school and passed the knowledge test at the end, with a fine score.

Still, certain test topics do make more sense after you have done some practice instrument flying than if you try to puzzle them out at home, he said. Faced with a test question asking which of several illustrations represented an airplane “on the 210-degree magnetic bearing FROM the NDB,” solving it took too much time.

“I had never used NDB before,” he said.

“Understanding the concept of primary and supporting instruments is something else that comes along with practical experience,” he said, opening a page of sample test questions on his iPad.

“I had a question like this: Which instrument provides the most pertinent information (primary) for bank control in straight-and-level flight?

“It’s C,” the pilot said. “My instructor says that one trips up many people.”

All agreed that if you take the test too early it might expire—expensive!

Out of the murk, Cold-Front Frank suddenly appears. The retired pilot with a zillion hours still teaches to keep his hand in, and legend has it that you’ll be up there shooting approaches with CF Frank when waterfowl are calling in sick.

They flag Frank down and ask when he would want an applicant to take a knowledge test.