When Clayton Smeltz sits in the left seat of his Piper Cherokee 140, he doesn’t have to think about the best way to maneuver his wheelchair around obstacles or over uneven terrain. He’s free.

“If you can, imagine just the challenges, mobility wise, that I’m faced with on a daily basis, confined to a wheelchair, having to roll over flat-surfaces-only type of thing, then to be able to race down the runway and shoot yourself into the sky, and suddenly you’re able to rotate in any axis you want and go anywhere you want,” Smelts explained after flying into Ohio’s Mansfield Lahm Regional Airport on a calm day to meet his instructor, talk to AOPA, and take guests flying with his recently earn private pilot certificate in hand. “That’s a feeling of freedom and liberation that I don’t think I would otherwise be able to experience.”

Smeltz suffered a spinal cord injury when he was 16 months old after a pickup truck ran over him. The injury left him with little use of his legs, but Smeltz said the disability didn’t “throttle back” his “strong will and drive to do things, sports and activities,” even though it limited him from reaching some goals. However, the 32-year-old never let go of his dream of learning to fly that was spurred at a young age by building and flying remote-control airplanes with his father and grandfather.

In October, Smeltz researched flight training options but discovered that none of the flight schools near Mansfield offered training in aircraft already equipped with hand controls for the rudder pedals. “So, I was forced to buy a plane,” he said with a grin. Through owner financing, Smeltz purchased a Piper Cherokee 140 and then ordered hand controls that had supplemental type certificate approval to be installed in the aircraft. The aircraft already was equipped with a hand brake.

As word of Smeltz’s ambition spread through pilot communities at airports near Mansfield, instructor Dave Storm reached out to offer training, which helped to put the soon-to-be student at ease. “The thing that I wondered was, ‘Alright even after I get this plane and get these hand controls installed, am I going to be able to find someone crazy enough to fly in it with me?’” Smeltz recalled. Before flying with Storm, Smeltz said he would understand if he felt uncomfortable and didn’t want to fly with him. “I never one time felt that way,” Storm said. “It was good from the start.”

The retired high school teacher said his goal with Smeltz, and all students, is “to make it as stress free as you can. Flying an airplane is stressful enough, especially when you’re just learning.” Storm described Smeltz as highly motivated and credited that with his rapid progress through training. The two trained at Galion Municipal Airport near Mansfield, and only six months lapsed from the time Smeltz checked into flight training, bought an aircraft, had it equipped with hand controls for the rudders, and soloed until he earned his private pilot certificate.

Smeltz said that he firmly believes he can do anything he sets his mind to. “I live by a verse in the Bible that says, ‘I can do all things through Christ who strengthens me,’ and that definitely applied in this situation,” he said. “When you set out to do something, you’re going to be met with challenges and adversity, but if you stick with it, that adversity will be matched with provisions.” 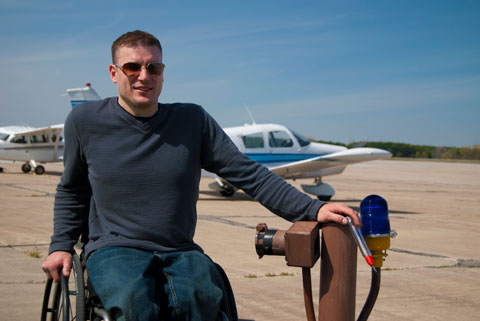 Clayton Smeltz purchased a Piper Cherokee 140 and outfitted it with rudder hand controls to pursue his dream of learning to fly. Photo by Paul Harrop.