Get the app Get the app
News & Media Big Foot Kitfox

No assembly required for the Light Sport model

The photos on these pages show the tailwheel configuration of one of the lower-cost new Light Sport aircraft on the market ($99,000 to $120,000 with most commonly requested options), but I know what you are thinking. AOPA statisticians say 90 percent of you don’t fly tailwheel aircraft, and the majority of you don’t need backcountry tundra tires. But hold on a minute, because the Rotax-powered Kitfox Super Sport SLSA also comes with normal-size tires, and one of them can go on a nose strut. All you need to do when you order the factory-assembled LSA is to tell the salesman you want a nosewheel aircraft; there’s no extra cost. If you later discover you want a tailwheel aircraft after all, the factory can convert it for you. 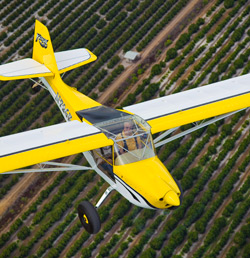 The Kitfox uses symmetrical airfoils in the tail for both the vertical stabilizer and rudder that adhere airflow to their surfaces and make them—especially the rudder—more effective. Company officials feel the tube-and-fabric design makes for easier repairs than composite aircraft. The clear door offers good visibility yet provides a feeling of a closed and protected cabin. It bows outward for more elbow room.

Kitfox Aircraft is owned by John and Debra McBean of Homedale, Idaho. John had planned to bring a Kitfox SLSA with tricycle gear to Sebring, Florida, for our review, but it wasn’t available. What arrived was Paul Leadabrand’s backcountry rock climber with conventional gear. The airplane is equipped with Airstreak backcountry tires from Alaskan Bushwheel that come as a $2,200 option. They need only eight to 12 pounds of air pressure, meaning you’ll safely roll over any rocks hiding in the backcountry grass.

The aircraft seen here was flown from its Boise home to Sebring at 110 mph true airspeed—the huge 26-inch tires (30-inch tires are available) take away about 5 mph, and its ground-adjustable propeller is set for climb. The fabric-covered Kitfox has never been known for its speed (the small-tire model can cruise at 123 mph true airspeed), but it has gained a reputation for safety and quality of build. The wings fold for those storing the aircraft in a garage or someone else’s hangar.

Kitfox over the years has been what its name implies—primarily a kitplane. (The name is actually based on a fox species native to the area where the original Kitfox factory was located in Idaho.) Some 5,000 Kitfox aircraft have been sold worldwide, and 3,800 of those are flying. Success in sales of kits allowed the company to begin offering a factory-built light sport model.

Some customers just don’t want to build an airplane. (Builders can choose from among a variety of engines, but the factory-built Light Sport model is approved only with the 100-horsepower Rotax.) There are only seven factory-built Light Sport Kitfox aircraft flying with customers since the model was introduced in 2009, but the backlog for the LSA kit model stretches out a year ahead. For the non-LSA kits, the backlog is two to three months.

The Kitfox has a secret: It was designed for a maximum gross weight of 1,550 pounds, but it can “play dumb” and fly at only 1,320 pounds to meet the ASTM standards for LSA. Here’s the catch: You must register it that very first time, literally right out of the box after you build it, as an airplane with a gross weight of 1,320 pounds, and must continuously operate it as a Light Sport airplane. That point is little understood, says McBean, who had debated the issue with customers. Owners who first registered their amateur-built Kitfox as a 1,550-pound aircraft, and operated it as such, are out of luck. It’s too late to just wave a wand over it and declare it an LSA.

Rudder pedals (left) have holes in them that serve two purposes. They save weight, but also the edges of the holes are intentionally raised to provide grip for the pilot's feet. The Kitfox logo combines shades of black and gray to give a silver effect (right).

Looking at the sky

The large tires give the aircraft a high deck angle. That means you need to S-turn during taxi. I was advised by Leada-brand to land and take off beside—not on—the centerline to give me a reference for directional control. Takeoff required a hefty forward push to slightly raise the tail, and then back-pressure to climb away from the runway.

The aircraft proved it can take a crosswind with little drama. An approaching rain shower provided a stiff crosswind and a slick runway. Leadabrand called for more and more back-pressure as we settled into the three-point position. By the time the aircraft was ready to touch down the nose was pointed at the sky—the normal attitude when equipped with the monster wheels. 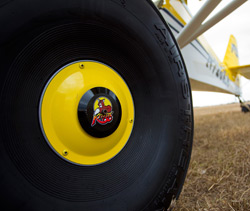 The Airstreak bush tires are made lighter than the regular bush tire model to accommodate the weight-conscious Light Sport aircraft category.

I had prepared to battle the crosswind, putting the upwind wheel down first, but the Kitfox seemed unaffected and tracked easily straight ahead. I had been warned that the big tires first skid on the surface before they spin up, but spin-up seemed almost instantaneous despite the now-slick runway. The first touchdown resulted in a light skip, and I got two landings for the price of one.

Since the aircraft’s refinement by Dan Denny in 1984, the company has been under three owners—Denny Aerocraft, SkyStar Aircraft, and now Kitfox Aircraft. One of those owners began efforts to certify the aircraft under FAA Part 23. The certification effort was never completed, but resulted in improvements such as the high-quality fit and finish seen today. Company officials say the aircraft has never had a structural failure in its 28 years. The airframe is rated to a positive 5.7 Gs and a negative 3.8 Gs when at its original, higher gross weight of 1,550 pounds.

Reminds me of something

I recently wrote about the Aerotrek ( “Half Price, Full Featured,” January 2012 AOPA Pilot). If you were to compare pictures of the Kitfox and Aerotrek (called Eurofox in Europe), you would notice similarities.

Both are high-wing, of course—nothing unusual about that. Both have full-span flaperons, basically ailerons that also extend downward slightly to become flaps. Both have clear doors of similar design that bow outward for elbow room. Both have skylights above not only the cockpit, but also the cargo area—although they differ in design. Both have fabric-covered fuselages and tails, plus folding wings for easy storage. 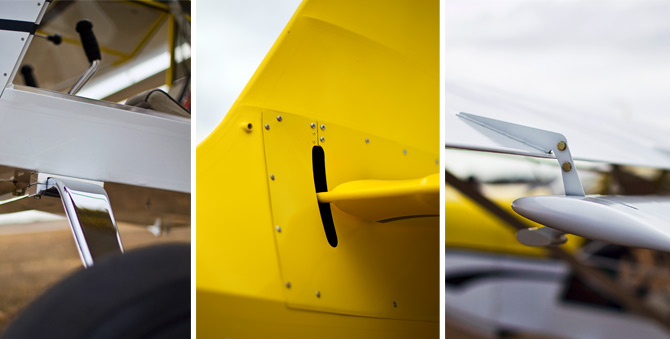 Trim is accomplished by moving the forward edge of the horizontal stabilizer up and down in the slot at the base of the tail and is known as a flying tail (middle). The company says it is more effective than a trim tab on the trailing edge of the horizontal stabilizer. Flaperons (right) move like ailerons for turns and extend slightly to become flaps. The door handle (left) is only on the outside of the aircraft. A key must be used to operate it from the outside.

Both aircraft are based on the basic Avid design shape developed by Dan Denny and Dean Wilson in 1981. The Kitfox resulted after Denny and Wilson parted ways. Since that time, the Kitfox has become one of the industry’s most copied designs. While the Aerotrek is also based on Avid plans, it followed its own path with refinements in the Czech Republic that were independent of changes made in Idaho. The Avid that the Aerotrek is based on was shorter and narrower, and had a lower gross weight than the Kitfox. While the Kitfox and Aerotrek appear similar, there are significant differences in landing gear systems, the baggage area, and cockpit size. The Kitfox has adjustable rudder pedals and seats, while the Aerotrek relies on seat pads for adjustment and does not have adjustable rudder pedals. 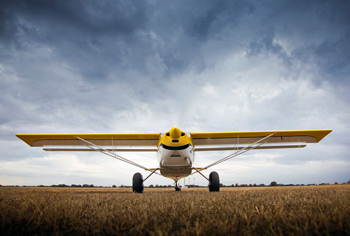 Unique in the industry

At Kitfox, customer training comes as part of the purchase price. You can’t eliminate the training and get a lower price, but you can take a big step toward safety by taking advantage of it.

Kitfox Aircraft signed a training agreement with Stick and Rudder Aviation,
40 miles away in Boise—and owned by Leadabrand. The 13,000-hour backcountry charter pilot and corporate jet instructor uses his tailwheel Kitfox for training. The school is open to the general public. Those completing a 10-hour course can rent Leadabrand’s Kitfox.

Leadabrand chose the tailwheel model because students learn to manage it in every axis, rather than relying on brakes and a nosewheel. Those lacking a tailwheel endorsement will get one when training is completed. He believes that even pilots who buy a nosewheel Kitfox will be better pilots after tailwheel training. He opted for the Dynon SkyView 10-inch display because he wanted the students to have an uncluttered cockpit with GPS navigation, moving map, terrain, flight instruments, and engine monitoring at their fingertips. It’s a low student workload. 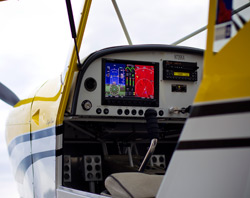 The full panel shown here is a $12,100 option and includes the Dynon SkyView glass cockpit display. While the Dynon display normally shows flight instruments, engine instruments, and a moving map with terrain, it can be configured to any combination of screens, or feature just one of the three categories of information as needed.

His $12,100 option package includes the Dynon display, a Garmin GTX 327 transponder, and a PS Engineering PM3000 intercom (with Karaoke Mode for singing along to your favorite song). A Garmin SL40 comm radio comes standard. Another option, which he did not purchase, provides a Garmin G3X complete glass cockpit, including synthetic vision, for $20,785. A BRS recovery parachute is an option, but no customer has ever purchased one.

Included in the standard package are dual hydraulic toe brakes; aluminum spring landing gear; cabin heat; an angle of attack system; an hour meter; and all standard instruments needed for flight, including an airspeed indicator, altimeter, compass, and engine gauges. Landing lights are a $1,295 option, along with a $995 navigation light and strobe package.

The McBeans chose beefy, tough parts, as seen with the Grove landing gear and brakes, in keeping with their claim that this is a rugged airplane for the backcountry. They use windscreens and windows from LP Aero, a company that claims to be the world’s largest manufacturer of FAA-approved windshields and windows. Compare it with some of the thin, nonaviation plastic used by other Light Sport manufacturers.

All LSAs are a challenge for graceful entry, but I found the Kitfox to be one of the easiest to board. Once inside, a pull-down bar across the door is very helpful for closing and locking it. Rudder pedals are easily adjusted for your size by simply pulling a lever on the center console. The electric stabilizer trim is controlled by a rocker switch conveniently located on the same console, under your right hand.

Landings are made at 60 mph indicated (that’s just 52 knots), or 55 mph if making a short-field landing. Just the sight of the wide stance of the main wheels brings a smile to most tailwheel pilots, because it means greater stability during takeoff and landing. Stability in level flight makes for a low workload, but stable doesn’t have to mean boring. It is fun to fly thanks to a sporty, quick roll rate. You’ll soon have that PS Engineering intercom in Karaoke Mode, singing your way through the skies. 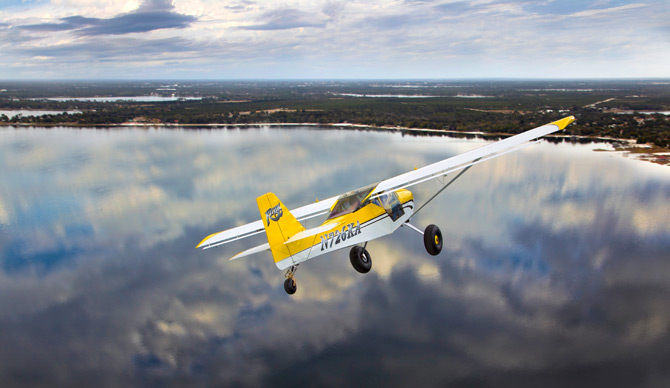 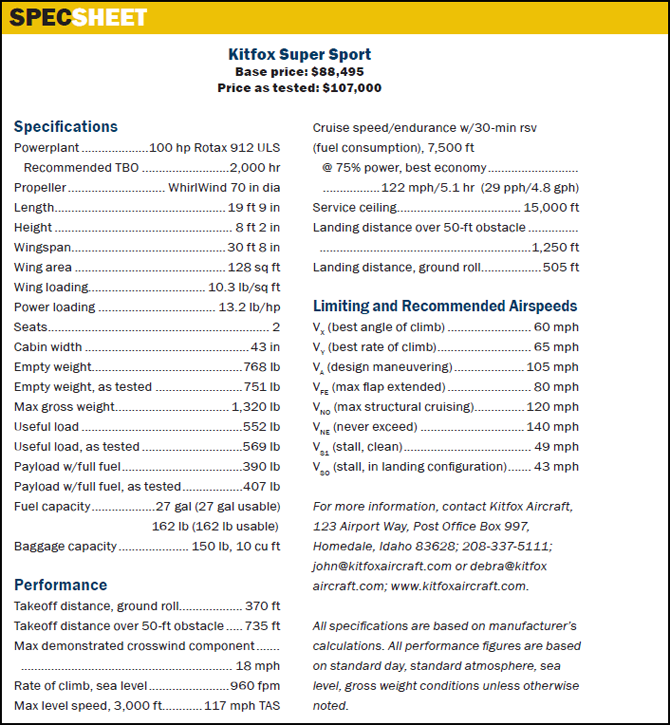