Get the app Get the app
Get the latest news on coronavirus impacts on general aviation, including what AOPA is doing to protect GA, event cancellations, advice for pilots to protect themselves, and more. Read More
Already a member? Please login below for an enhanced experience. Not a member? Join today
News & Media Revisiting a Tragedy 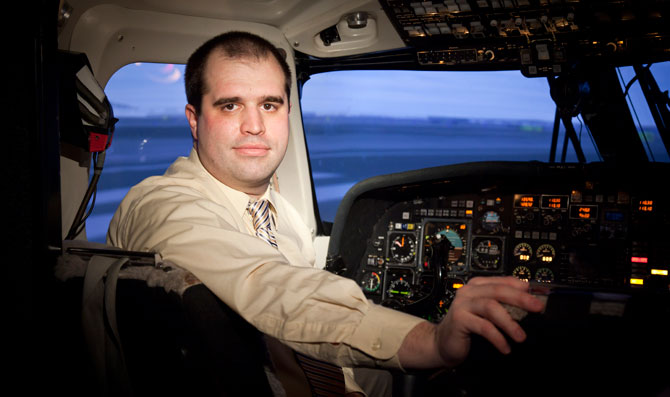 Perdaris, 33, has the landing gear down and flaps set, and tracks the ILS as the sound of rain beating against the windshield intensifies. As he descends through 1,000 feet agl, the Westwind’s onboard sensors note a gathering headwind—a possible wind shear precursor.

Perdaris continues the approach as turbulence tosses his 19,000-pound aircraft with sudden violence. The headwind raises the Westwind above the desired glideslope, and Perdaris pushes forward on the control yoke to quicken the airplane’s descent as he follows the sensitive radio signal toward the runway.

At about 550 feet agl, the headwind suddenly shifts to a powerful, 40-knot tailwind, and the vulnerable airplane plummets toward the ground. Airspeed falls from 150 knots to 120, and the automated voice calls out a dire warning: “Wind shear! Wind shear! Wind shear!” Perdaris slams the power levers forward and pulls back hard on the yoke, commanding a dramatic 20-degree nose-up pitch attitude, but the airplane continues to settle as it approaches its 99-knot stall speed.

The runway threshold passes beneath the jet as it claws for altitude. The rain has stopped and the Westwind climbs skyward, slowly at first, then more rapidly as it escapes the powerful downdrafts and moves into placid air. As Perdaris commands flaps to the normal climb setting and landing gear up, he feels a wave of relief at having successfully flown through a nightmare scenario—and one that has special significance for him and his family.

Perdaris, of Olathe, Kansas, was just 6 years old when his father, Peter Michael Perdaris, was killed aboard Delta Air Lines Flight 191, a Lockheed L-1011 TriStar, when it encountered wind shear on the same approach to the same runway (then 17 Left) at Dallas/Fort Worth. The accident took 137 lives (26 of his dad’s fellow passengers and three flight attendants survived the crash although two later died from their injuries). Together with several other high-profile airline accidents in the 1970s and 1980s, the loss of Delta Flight 191 led to rapid advancement in ground- and cockpit-based wind shear detection equipment. The accidents also focused airline and corporate pilot training on ways to identify, avoid, and escape such potentially lethal weather.

Perdaris has read and reread the Delta Flight 191 accident reports, watched the documentaries, and done as much as he can to understand the technical aspects of what went wrong on that day, August 2, 1985.

But it wasn’t until he visited SimCom’s Orlando, Florida, training center and flew the actual scenario in a full-motion, Level C simulator that he understood what the Delta crew saw and felt during the final minutes of a previously uneventful flight from Fort Lauderdale, Florida. He also got an up-close look at the safety tools pilots have today that the Delta crew didn’t—and a chance to measure his reactions as a professional pilot when confronted with the same potentially deadly set of circumstances.

Delta Flight 191 had dodged a few isolated thunderstorm cells as it approached Dallas for landing, but the weather was VFR and the surface wind calm as the three-person crew began the approach.

Capt. Edward N. “Ted” Connors, 57, was known as a veteran pilot who avoided thunderstorms, listened carefully to fellow crewmembers, and was a consummate professional. First Officer Rudolph P. “Rudy” Price, 42, was well respected among peers and had flown 1,200 hours in the L-1011. Flight Engineer Nick N. Nassick had been at Delta nine years and flown the L-1011 more than 4,500 hours.

The L-1011 fell in line on the final approach course behind an American Airlines Boeing 727 and a Learjet 25.

An isolated thunderstorm cell was forming just north of the airport, but the pilots of the previous airplanes reported no unusual hazards. The airport was equipped with a ground-based low-level wind shear advisory system, and it raised no alarms.

Air traffic control then broadcast this seemingly innocuous message: “Attention all aircraft listening…there’s a little rainshower just north of the airport and they’re starting to make ILS approaches. Tune up 109.1 for 17 Left.”

The Delta Air Lines flight operations manual required pilots to avoid thunderstorms by at least five miles. But was this a thunderstorm? The airplanes directly ahead were landing uneventfully, and the Delta Flight 191 crew was scheduled to make a quick turn in Dallas and board another airplane for a flight back to the East Coast. Any delay could make them tardy for their next flight.

Afterward, Perdaris, a married father of two children, ages 4 and 1, is at once exhausted, exhilarated, and reflective. The simulator is incredibly realistic, and its hydraulics are in overdrive as it jostles the occupants in a disorienting series of sharp, jerky movements meant to recreate the sensations of severe turbulence. More than an hour in the box is physically strenuous, apart from the mental and emotional demands.

“This answers the questions I’ve been carrying around for a long, long time,” he said. “I had read the NTSB report. But seeing the actual scenario gives me a much deeper appreciation of exactly what must have been going on in the cockpit, and what my dad and his fellow passengers were going through.”

“Looks like we’re going to get our airplane washed,” co-pilot Price says as the wide-body jet descends to 5,000 feet with rain showers in the area. The crew turns on the No Smoking light, chimes for the flight attendants to take their seats, and goes through the prelanding checklists. Price is flying the airplane and Connors, the captain, is making the radio calls. They switch to the tower frequency, and Connors checks in.

“Lightning coming out of that one,” Price says.

“Lightning coming out of that one.”

“Right ahead of us.”

Flight 191 descends through 1,000 feet and the turbulence increases, and the airspeed surges more than 20 knots.

“Watch your speed,” Connors tells Price as the rain intensifies. “You’re going to lose it all of a sudden. There it is.”

The headwind shears to a tailwind, just as he predicted, and the L-1011 begins to drop.

The three engines had been at nearly idle power, and it takes several long seconds for the rpm to increase. The airplane’s ground proximity warning system begins to sound repeatedly, “Pull up! Whoop whoop, pull up!”

“TOGA,” Connors commands, calling for maximum takeoff/go-around power. The flight director commands a steep climb, and Price pulls back on the control yoke. Twice, he feels the stick-shaker that warns of an impending stall and relaxes the back-pressure or even pushes forward on the yoke.

The airplane pitches up to 15 degrees, but a 40-knot tailwind prevents it from climbing. It touches down at 170 knots in an open field and jumps momentarily back into the air, but its landing gear strikes a car on the highway, and its left wing hits a highway light pole.

It careens into a pair of massive water tanks, cartwheels, and explodes.

The Delta Flight 191 accident is one of the most intensely studied airline disasters in history. And since the cockpit voice and data recorders were recovered intact, meteorological data was available, and there were many witnesses, the entire accident chain could be known in detail.

The NTSB final report faults the Delta crew for continuing the approach through a cumulonimbus cloud from which they observed lightning, a lack of specific guidelines and training for avoiding and escaping from low-level wind shear, and a lack of real-time hazard information.

Even with that series of tragic mistakes, however, the Delta crew came tantalizingly close to averting disaster. Had the captain called for a go-around a few seconds earlier, had the first officer not unspooled the engines by reducing power to near idle during the approach—or relaxed the back-pressure on the control yoke at the onset of the stick shaker—the event might have ended without any loss of life.

Perdaris said he holds no bitterness about the accident that took the life of his father, an electrical engineer, student pilot, and aviation enthusiast who had taken his son to local airshows and flying in a CFI friend’s Cessna 182.

“My childhood essentially ended on August second, 1985,” Perdaris said. “My mom was absolutely devastated, and my sister was only 3 years old, so I had to start acting like an adult at a very young age.”

Perdaris said his mother was reluctant when he said he wanted to learn to fly as a high school student. But his stepfather was encouraging, and his mom relented. He’s gone on to fly a long series of airplanes professionally including a Cessna 206, Citation III, and King Air B100.

Perdaris said seeing the DFW wind shear scenario from the left seat of a full-motion simulator was beneficial both professionally and personally.

“I feel like I’ve got a much better understanding about exactly what went on that day, and how to handle it if I ever encounter it in my own flying career,” he said. “I can visualize exactly what took place.”

The aural cautions and warnings that were so helpful in the Westwind simulator came about as a direct result of the Delta Flight 191 tragedy. When combined with escape techniques developed by aircraft manufacturers, they give today’s pilots a better chance of avoiding microbursts, or flying through them successfully if encountered.

“There’s no question in my mind that if the Delta crew had had the same tools and training that I had today, they would have survived,” Perdaris said. “The combination of equipment and training is essential.&rdquo